The Secret of Victory 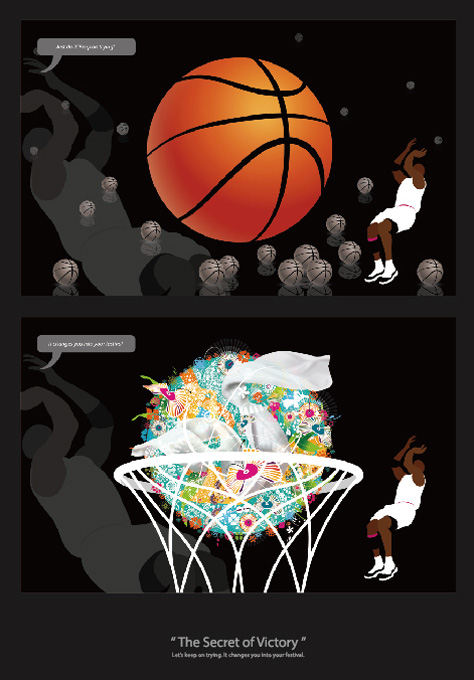 Many people living in this world live for happiness. People want to achieve various forms of happiness such as happiness of works, family, life and so on. All modern people pursue things in their own way, but they are hampered by obstacles, and they lose their frustration easily and fail to lose their sense of happiness. In oriental philosophy, if you change yourself, you can change your environment as well. It is said that only the mind is important. It is said that if the power of the mind is able to overcome the difficulties, it can enjoy the process and eventually move towards the direction of happiness. All the people need is not frustrated. As a graphic designer, I wanted to find a message that would be the key to the message of happiness and to put the same message in a visual language.

To visualize the happiness message, I sorted out the views of happiness and summarized contents. And I classified the contents of the text into a sentence of one sentence and made a list of the contents. Happiness messages are my personal project. My Second happy message title is ' The Secret of Victory’. I set the key message ‘Let’s keep on trying. It changes you into your festival’. The details of this are as follows. All goals are always accompanied by frustration and sabotage. That is why constant attempts should be accumulated to progress toward the desired path.
First, it was divided into key keywords and additional keywords to translate the linguistic structure into the architecture of the visual language. Second, it tested visual symbols that match it and tested the structure of visual language. Third, I combined the festival with a visual symbol and a visual symbol that represents endless attempts. Finally, in order to compare the contents, it expressed the overall format in two cartoon formats.

In order to achieve any goals, attempts are made to move towards the desired direction of happiness, but if you stop, the frustration awaits. Constant attempt is the secret of victory, and the key to making you a festival. I likened the 'endless attempt' to basketball. And I expressed the atmosphere of an exciting festival by mixing elements of Korean traditional dance and music to express the key message that is ‘Let’s keep on trying. It changes you into your festival’.