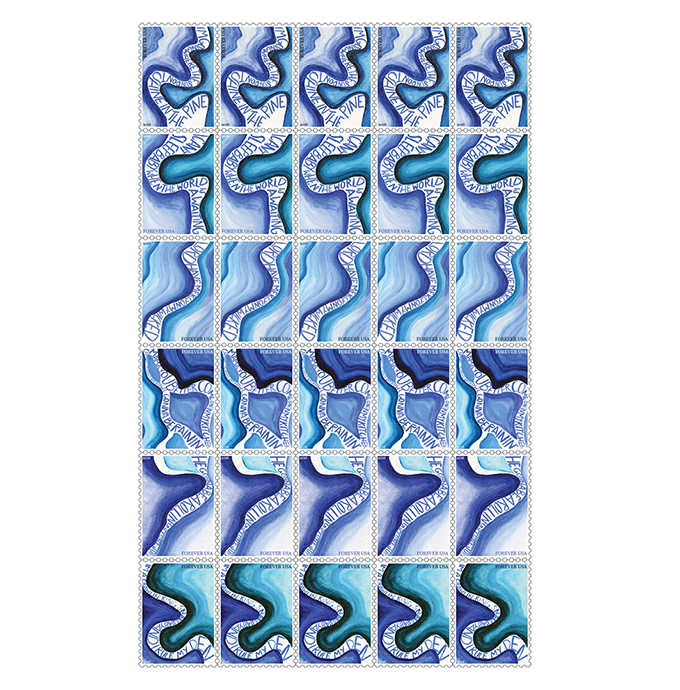 Create a set of 6 postage stamps.

I based my stamps on a personal story. Seven years ago I found myself in a seemingly abandoned strip of downtown Clarksdale, Mississippi. An hour south of Oxford, my then-boyfriend’s college town, the two of us were waiting in line outside a blues club. After a few minutes, we stepped into a tiny room drenched in red light. Old, ratty oriental rugs covered the dirt floors. I grabbed the only stool available and sat in anticipation of the music I had been promised. A man no younger than eighty took the stage. He was dressed to the nines, in a fancy suit and beautiful leather shoes, and began playing. I was completely mesmerized. It was the first time I’d experienced blues music the way it was written to be heard. The pain expressed in the lyrics was palpable, but so was the beauty. That night marked the beginning of a long fascination and appreciation of the Delta blues music tradition. I designed these stamps as an exploration of the relationship blues music has with it’s geographic origin. While the blues are appreciated worldwide and made famous by The Rolling Stones, The Yardbirds, Led Zeppelin, and many others, it’s roots are in the nameless and faceless slaves working under the hot, southern Delta sun.

The resulting stamps interwove blues lyrics into the river.