I called that half hour, perfection of the finite. 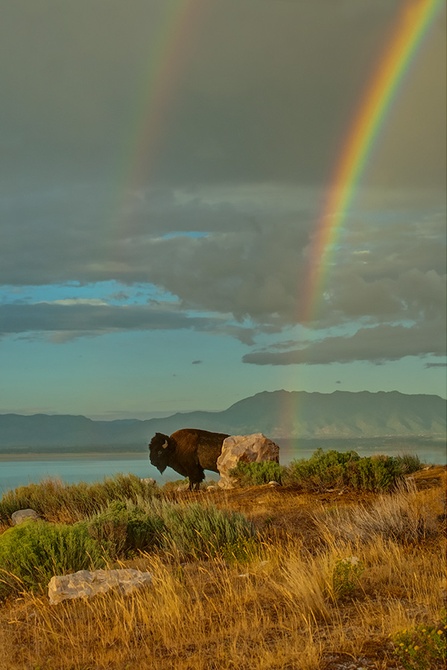 Title
I called that half hour, perfection of the finite.

Title
I called that half hour, perfection of the finite.

And I called this Half Hour Perfection of the Finite. It was a magical moment when I took this photo in -Antelope Island in Salt Lake, Utah -When i was in my way toward the exit of the park, the day was cloudy and drizzling, and had spent most of the day in that way, I was frustrated because as photographer always expect the light of a sun on a clear day be with you, suddenly a bison appear walking toward the rocks, I had been warned not to interfere in the territorial area of the bison because if they feel threatened they will attack you. I only carry this 35-135 zoom lens, so short to make a close up to the bison that size, I had to approach more than necessary, we made eye contact and the bison began to scratch against the pale stone and not worry much about my presence , which I took to get as close as possible, the light was flat and dark did some shots just to keep cursing that light was nothing benevolent to this singular scene and suddenly the setting sun went below the clouds illuminating this magnificent animal and in top of it formed a complete double Rainbow just starting on the rock where bison was scratching, the skin texture with light flowed like his gentle eyes looking at me, This scene in particular must have some meaning in the mythology of the American Indians, i do not understand the meanning yet , what I do know is that it was a very special moment fortunately he was captured in this photo. I work full time as an advertising photographer, in my spare time or in my vacations, I do my personal photographic work, in landscapes, animals and nature.

"Nature, is constantly changing and offers unrepeatable scenes like this one of the rainbow and the bison scratching on the rock, to capture it in photo you need to be there with camera in hand"