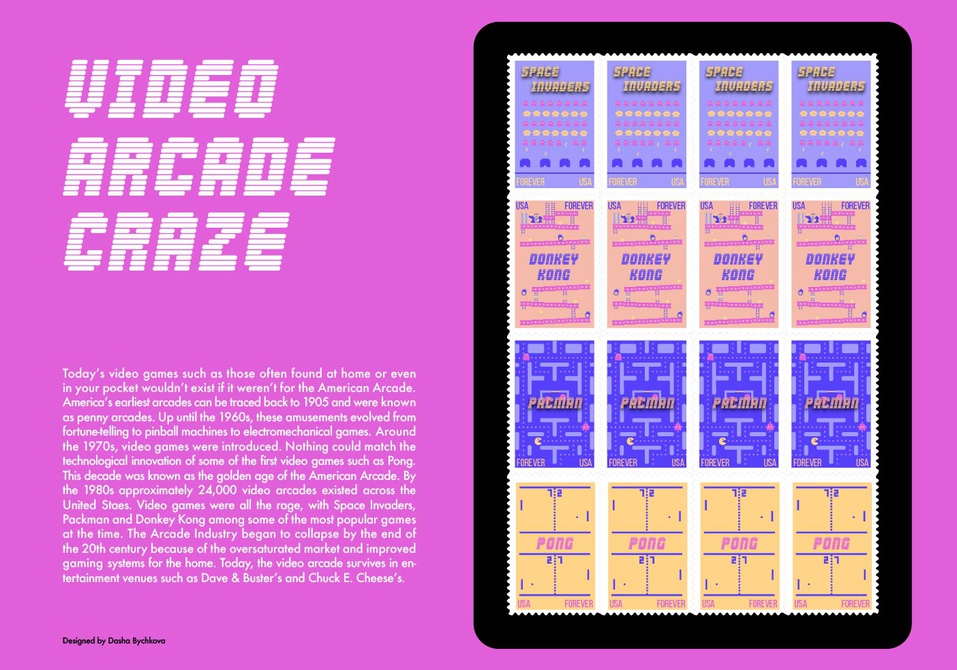 Professor Strong assigned us to design stamps that represented American Culture or American History in some way.

When I think of arcade games, pixelated and simple geometric forms come to mind, which was my inspiration for the three typefaces I used throughout my pane and stamps. I used Abduction2002 for my series title “Arcade Craze” and the titles for each of my stamps. This typeface reminded me of the static horizontal lines going across an old screen of an arcade machine. As for the body copy, I used Futura due to its geometric forms, which make up the majority of my stamp illustrations. This typeface also was not as decorative as Abduction2002, so Futura created an even balance throughout my layout. Lastly, for the stamp value and country of origin, I used Bebas Nue, which reminded me of the digital scoreboards often found in arcade games due to its condensed letterforms.

Since I am highlighting the four most iconic arcade games, I wanted to illustrate each game as if you were actually playing the game. I created this concept by incorporating movement and action into each game. For Space Invaders, I made the cannons shoot lasers, which hits one of the aliens, so I eliminated that alien from the illustration. For Donkey Kong, I placed various barrels and fireballs that he throws throughout the tilted surfaces. For Pacman, I illustrated Pacman as if he was eating the dots while the ghosts were chasing him. Lastly, I illustrated Pong as if the ball was bouncing off the paddle. I added a scoreboard to indicate the game is being played.

Since each game has such different colors, in reality, I wanted to create consistency and connection by using a palette of six colors. These colors included three tones of purple, one pink tone, one orange tone, and one yellow tone. My inspiration for this palette was the actual arcade environment. It is often very dark in arcades and the only colors or lights that can be seen are the lights coming from the arcade machines. These emitted lights are often very bright and vivid, so I chose a bright and retro palette that consisted mostly of purple and pink tones with the addition of lighter tones such as the orange and yellow to add contrast.

My final piece depicts an unconventional topic. I wanted to focus on the great American arcade since its video game era established a path for the existing video game culture today. The arcade industry is an unconventional topic regarding American representation, however, it actually has a huge impact on American society and popular culture. Today’s technologically-improved video games such as those often found at home or even in your pocket wouldn’t exist if it weren’t for the American Arcade. Video games have become integrated into almost every part of popular culture. Therefore, I believe the arcade industry marks a very important place in American history and it all starts with the origins. My four stamps incorporate illustrations of the four most iconic video games, which originated in the great American Arcade.