Italy do not leave us. 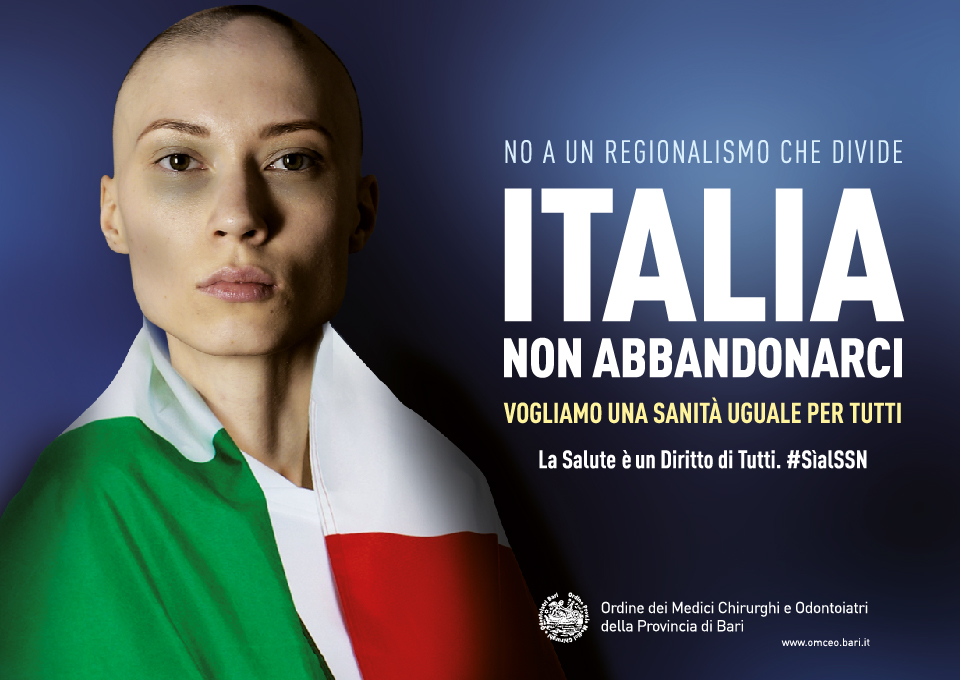 Title
Italy do not leave us.

In Italy some regions have requested greater management autonomy, including in the healthcare sector. Faced with these requests, the Order of Physicians has expressed concerns about a process that risks denying citizens' equality in terms of health, especially for the regions of Southern Italy, where patients already experience lower levels of assistance than the rest of the country and are often forced to go to the north to get treatment. The Order then asked the agency for a communication campaign aimed at raising public attention to the possible consequences of regionalism on the unity of the country and on the equality of citizens in accessing the right to health.

The agency has developed the "Italy do not leave us" campaign that is posted locally and on social media. The protagonist of the posters is a woman suffering from cancer, wrapped in a tricolor flag, accompanied by a request for help: "Italy do not leave us. We want an equal health for all. Health is everyone's right. "
The campaign is accompanied by the hashtag #SìalSSN (Yes to the National Healthcare System), which recalls the national healthcare service and its values ​​of fairness, equality and solidarity as a bulwark against a situation where there would be Italian first class citizens and Italian second class citizens in some areas such as healthcare, depending on the region in which they live.

The campaign has managed to capture the attention of traditional media at national level; online newspapers, press and TV such as: Corriere della sera, LaRepubblica, La7, ANSA, Tgcom24, Huffingtonpost.it.
Even on social media, the campaign was widespread, reaching over 155 thousand people and receiving over 18 thousand interactions.
The result was a greater attention of public opinion with respect to the ongoing debate on the political process of autonomy and on the possible consequences on the national healthcare system.