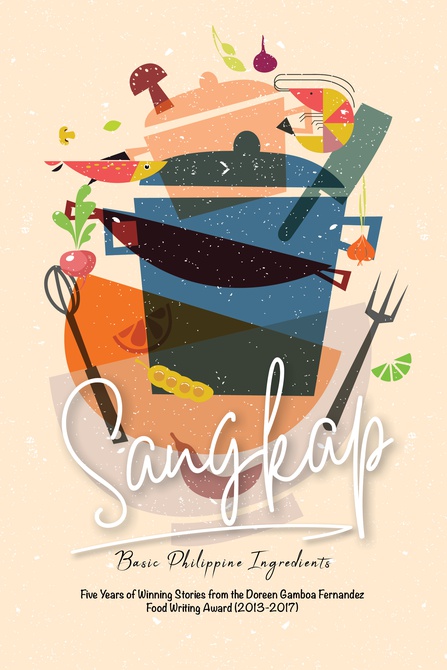 The assignment was for a book design for SANGKAP (Basic Philippine Ingredients), a compilation of five years of winning stories from the annual Doreen Gamboa Fernandez Food Writing Contest which is run by the Food Writers Association of the Philippines (FWAP). A theme was assigned each year which revolved around a specific ingredient used in Filipino cuisine (rice, coconut, herbs, vinegar and shrimp paste).

Sangkap’s design had to appeal to a new generation of young chefs, readers, food writers, bloggers and food enthusiasts who have a renewed appreciation and interest in Philippine cuisine, its history and special role in the country’s unique culture.

Sangkap also had to be an example of how a small book ’s quality can be uplifted. In the Philippines, publishers print on newsprint or low-grade paper stock with book covers limited to one or two colors to minimize costs. Books are cheap in price but short on looks.

The designer chose a young and modern rendition of kitchen life – exciting, dynamic and delightful. A medley of graphic forms took the shape of pots and pans and kitchen utensils. A bevy of cooking ingredients swirled around them, simulating the energy that is non-stop in a Filipino kitchen.

The diversity of Philippine cuisine, which includes Spanish, American, Chinese, Malay and Mexican was represented by the vibrant colors of an orange-brown-blue palette. To showcase the “stars” of the book - the swirling ingredients – were each spot-varnished. The cover was also matte laminated to further upgrade its look.

To evoke warmth and intimacy, the font used for the title was a script. Other fonts were reminiscent of handwritten scribbling on a recipe book.

Most importantly, SANGKAP which was printed on first class US Book Paper, was available at a reasonable price, confirming the publisher's belief that small books can indeed be both attractive and affordable.

FWAP'S launching of SANGKAP on May 9, 2019 inspired the execution of:
1. Plans for immediate reprinting because 500 books were sold within a week of its launch. The total quantity of 1,000 is expected to run out in a month.
2. Release of a Call for Submission for a new anthology on food and vintage cooking tools used by generations past which will be for publication in April 2020. (April is Philippine Food Month)
3. A 2019-2020 calendar of events such as a “market crawl” to provincial markets and cooking of local specialties and dining at a tourist spot.
4. Publication of a coffee table book on the 500-year history of the Philippines told through the journey of vegetables and fruits into the Philippines.
5. Food lectures in cooperation with the Department of Tourism and local government units.