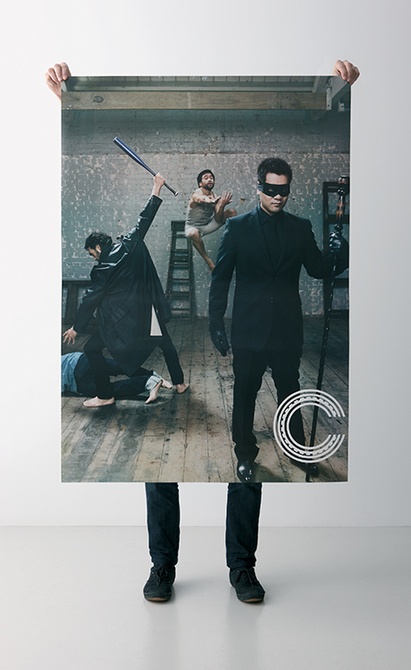 Gathering Clouds is a dance work by internationally acclaimed choreographer Neil Ieremia. Gathering Clouds responds to controversial claims made by economist Greg Clydesdale in which he warns that Polynesians display “significant and enduring under-achievement.” Gathering Clouds communicates the subtle triumphs and unjust struggles of Pacific Islanders living in New Zealand over the last 40 years. The campaign was executed across multiple elements, including bill posters, print advertising, programme, collateral and merchandise. Black Grace: Contemporary Pacific dance company. A custom typeface based on classic modernist typography influenced by traditional Samoan tattoo is integral to the Black Grace identity. The ability to see through the typography into the image is key—bold letterforms that don’t compromise the image beneath. The central campaign image incorporated the performers and key visual elements from the work into a triptych relating to the three acts in the work. It is a combination of this strong typography and cinematic photography that leads this campaign. This triptych format also provided the platform for the bill poster campaign. The Auckland Festival is a very competitive environment. Prior planning helped us secure key sites that allowed us to create a set of 4 posters that joined together, that, at size C0 each, visually dominated the environment. A single striking A0 poster was also created for smaller sites, and for use in Adshels.