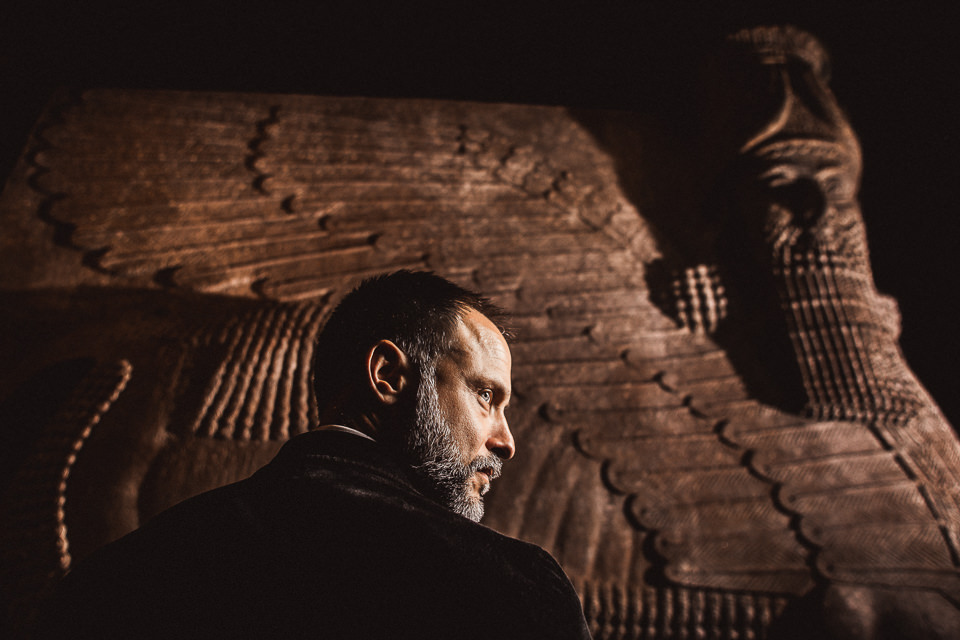 Location
The Oriental Institute at the University of Chicago

_______About My Approach:
My promotional theater photography is based in portraiture. I've been a performer most of my life-- so as a photographer I like to create unexpected moments through play and experimentation.

_______About the "An Iliad" shoot:
This was one of those projects that arrives every few years that's rather special. The location was the Oriental Institute at the University of Chicago-- and I had my choice of artwork to integrate into the photography. I chose a 2500 year old relief-- the Human-Headed Winged Bull from the Palace of Sargon II because it was the most grand at 40 tons and 16 feet tall.

The challenge here is that we were working in a hallowed room with an ancient cultural icon. So-- my usual running and yelling and jumping and improvising was not going to work. We had to stay 3 feet away from the artwork, I could only use flash sparingly, and the museum was open to the public-- so one of my top priorities was to honor the other guests taking in the art. (I tried to include everyone as much as possible in conversation-- so that they felt part of the process, rather than voyeurs-- and I enjoy having a participatory audience during shoots-- as a performer, it gives me energy)

Typically, I would want to have Tim climbing the relief while delivering some lines to the camera-- but we had to stay small-- so integrating his profile with the relief using a simple two light setup was what I decided was best.

Tim-- as always-- was gracious and exact. And-- in our 1/2 hour setup/shoot/breakdown we created the key art that served the show and made Traci and Court Theatre happy. And-- the show sold out quickly.

The photos matched the epic tone of the show blending the modern and the ancient.