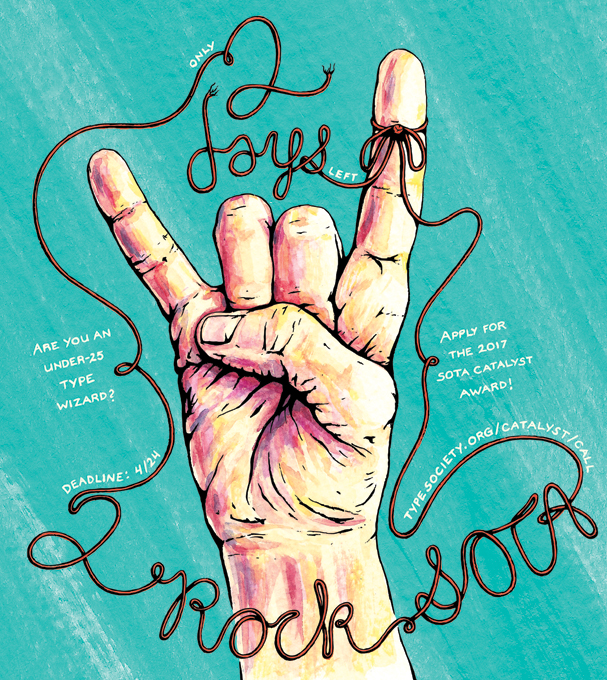 The Society of Typographic Aficionados (SOTA) created the Catalyst Award to recognize people under age 25 who are creating original work in the typographic fields, and who do not yet enjoy broad exposure in the profession.

In 2017, I was honored to serve on the committee of five judges charged with the difficult task of selecting a Catalyst Award winner. Judges were invited to tweet about the call for entries when it opened; before the call closed, I planned to also tweet a reminder of the deadline.

Being between projects, my intention to send a typical, plain text tweet about the contest's deadline quickly took on a more creative spin — what if I were to handwrite my tweet? The Catalyst Award is, after all, a celebration of typography.

Timing was the next consideration. A reminder sent the day before a competition deadline doesn't give last-minute entrants much lead time, so it seemed better to tweet two days before the due date.

My reminder began to revolve around the number two. The iconic image of a hand with string tied around a raised index finger (the old-fashioned method for reminding oneself of something important) came to mind, but I felt two raised fingers would better reinforce the theme. I considered two-fingered hand gestures that might somehow compliment my message and thought of the sign of the horns, coopted by heavy metal culture to mean "rock on.” That informed my headline, the letterforms of which are fashioned from the exaggeratedly lengthened loose ends of the “reminder string.”

The line drawing and lettering were executed in graphite, separately from the coloring. The illustration’s bright and funky color palette — appropriate for a competition celebrating youthful talent — is rendered in watercolor (foreground elements) and acrylic (background).

An unexpectedly fleshed out hand lettering/illustration project was spawned by what was originally to be a simple tweet about a deadline! Personally, it kept my creativity flowing between projects. Hopefully it also inspired young typophiles who might have seen it to consider entering … if not in 2017, perhaps in the future.