Thunder on the Mountain 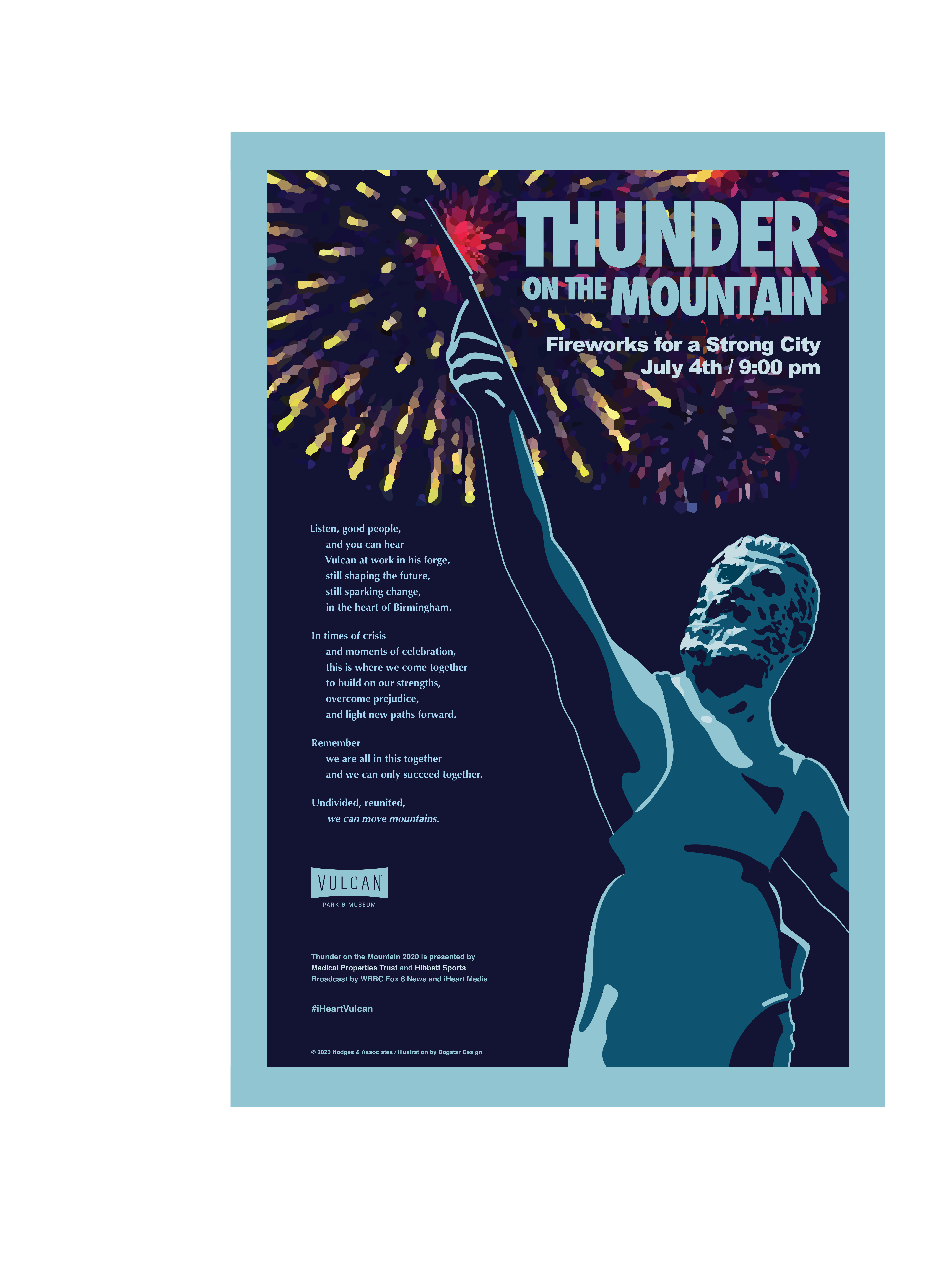 Shortly after the COVID-19 pandemic began in early 2020, Alabama’s most extravagant Independence Day celebration was under threat of being canceled, as fear gripped the community. As of May 20th, the annual fireworks display launched from the colossal statue of Vulcan atop Red Mountain, had been unable to attract a presenting sponsor. And neither the City of Birmingham nor the usual sponsors of the event known as “Thunder on the Mountain” were able to step forward. Birmingham Mayor Randall Woodfin and other leaders expressed their belief that the city needed this highly visible community celebration more than ever before.

Shortly after Vulcan Park & Museum turned to Hodges & Associates for help, the firm was able to secure funding from Birmingham-based Medical Properties Trust, Inc., which generously offered to provide twice the requested funds to make the fireworks display the best ever. As MPT’s founder, chairman and CEO Ed Aldag, Jr. said, “I want this to be a celebration of the people of greater Birmingham and a message of ‘We are all in this together and we will survive together.’”

Three days later, George Floyd was killed during his arrest in Minneapolis – and the world changed forever. Protests erupted across the nation, including in Birmingham’s Linn Park, where a crowd gathered around a Confederate monument and demanded its removal.

On the night of May 31st, some of the demonstrators began to deface the monument, striking it with picks and trying to topple it with a pickup truck. That’s when Birmingham Mayor Woodfin bravely waded into the crowd, beseeching the riotous crowd to give him 24 hours for the city to remove the monument peacefully.

Most of the protesters backed off, but others began roaming nearby streets – breaking windows, starting fires, and even attacking reporters covering the scene. Fears began to mount as a fire was started in a dumpster near the historic Alabama and Lyric Theatres, both made of wood. But the fire burned out and, the next day, true to the mayor’s word, the monument was removed. Soon, a host of volunteers – including families and children – descended on downtown to sweep up broken glass and board up damaged doors, while local artists began to paint murals honoring George Floyd.

Considering the double challenges presented by COVID and community unrest, Hodges & Associates concluded that a poster promoting the annual fireworks display needed to do more than simply celebrate the Fourth of July. This was an opportunity to promote community dialogue and healing, and to engage citizens to come together. Those were the shared goals of Vulcan Park & Museum, the presenting sponsor of the fireworks, and the agency.

Commissioned to herald Birmingham’s abundant natural and human resources as Alabama’s exhibit at the 1904 Louisiana Purchase Exposition in St. Louis (the “St. Louis World’s Fair”), Vulcan has stood tall as a unique product of its environment for well over a century. Made of iron dug from the mountain on which he stands and refined in a local furnace, the 56-foot-tall icon of Birmingham holds not a torch, but a spearpoint he has just hammered out on his huge anvil.

As conceived and sculpted by Italian immigrant/artist, Giuseppe Moretti, Birmingham’s Vulcan was inspired the useful “god of the forge,” who made weapons, tools, and furniture for other gods in the Roman pantheon. Moretti portrayed Vulcan holding up a new spearpoint – to make sure his work is straight and true. A worthy metaphor for a city working to shape a meaningful future for its citizens who may not always agree on the path forward, but who are best served by looking to the future – together.

Vulcan has not always stood so tall or loomed so large over his native city. After claiming the “Grand Prize” at the Palace of Mining and Mineralogy in St. Louis in 1904, where he reigned literally head and shoulders above all the other exhibits, Vulcan didn’t even have what an earlier generation described as “care fare home.” The city fathers had raised funds for his casting and citizens paid $2.00 for small replicas to cover his transportation to the Fair, but no funds remained to bring him back to Birmingham.

San Francisco wanted to buy him, an international exhibition in Portland wanted to feature him, but Birmingham leaders wanted to bring him home. In a gesture of good will, L&N Railroad offered to transport Vulcan free of charge, which it did. But with no place or funding to re-erect the 56-foot-tall iron statue, Vulcan found himself dumped beside the railroad tracks, where he would remain for years before being re-erected at the Alabama State Fairgrounds.

In the 1930’s, Vulcan Park was created atop Red Mountain as a WPA project, and the statue was elevated to a 126-foot pedestal overlooking the city. In the 1990s, the statue, which had been experiencing structural issues for years, was taken down and completely restored. And Vulcan Park was expanded to include a museum celebrating the statue’s and the city’s history – including the turbulent 1960s, when members of the Ku Klux Klan bombed the Sixteenth Street Baptist Church, killing four little girls attending Sunday School.

The Museum’s permanent exhibit covers both struggles and aspirations. Its continuing series of educational offerings and special exhibits document historic issues, from voting rights to women’s rights to worker rights. And its special events bring Birmingham citizens together at the foot of the statue for plays, concerts, and celebrations, as well as thoughtful discussions about the community’s needs.

Vulcan has been truly embraced by the broader community, and “Vulcan-ing,” which means assuming Vulcan’s pose and pointing up toward the sky, has become a fun sign of support for the city and its abiding icon.

Hodges & Associates’ poster for “Thunder on the Mountain” re-envisioned the sounds of fireworks as emanating from Vulcan’s forge, where he is still working to forge a new, more inclusive city. The poster also celebrates Vulcan Park as a civic forum where citizens from every corner of the community can come together to solve problems. In this light, the thunder is transformative, and, as the poster copy notes, “Undivided, reunited, we can move mountains.”

Posters may have only a limited effect, even when an event is promoted via television and radio, as this one was. But when a poster distills the essence of reflection and the opportunity a genuine community occasion creates, it can remind us of our common humanity and call us to celebrate shared dreams.

How to measure the impact of one small piece of a continuing puzzle is nearly impossible. But reactions from the park, the presenting sponsor and the public were all positive. And the poster sold out in Museum’s gift shop. That, in a quiet way, sounded like thunderous applause.