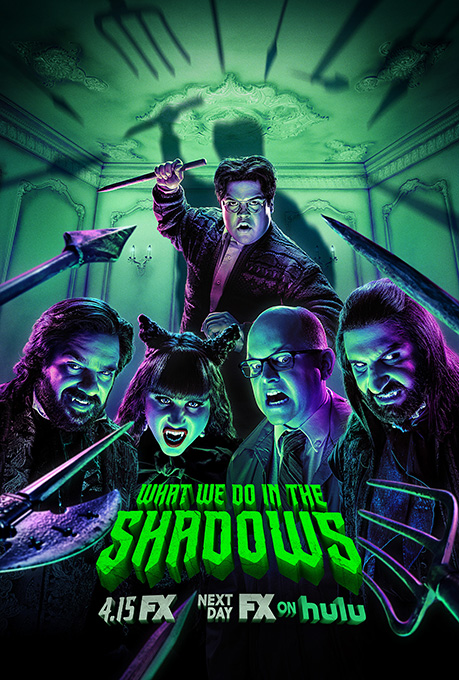 W.W.D.I.T.S. is a comedy TV show spin off from the successful film of the same name and executive producers Jemaine Clement and Taika Wattiti. In both the film and the show a camera crew follows and documents the lives of vampires living in our modern-day society a la The Office. The central theme of Season 2 was our vampire characters being hunted by humans and other vampires, with their only savior being their human servant / familiar Guillermo who is ironically a direct descendent of legendary vampire hunter, Van Helsing. The vampires live in absent-minded ignorance and do not recognize the threats facing them and would not survive if it was not for their faithful servant.

In Season 1 we established a brand look for the show with a neon black light color palette and chose to continue utilizing that look for this season. When boiling down the tropes of the vampires being hunted the image came to mind of townspeople approaching the scary house on the hill with pitchforks and torches casting long shadows and demanding justice. We chose to do 2 finishes for this campaign that centered around our Shadows cast being threatened by shadows: one which represented the vampire hunter’s, with their weaponry casting shadows around our expressive vampires, with Guillermo rising up behind them. We wanted the viewer to wonder if Guillermo is protecting or attacking? He is after all a descendant of Van Helsing, so is he really fighting off attackers or about to plunge a stake through his masters’ hearts? The second finish featured our same reactive vampires and Guillermo but featured a large bat shadow instead, representing the threat of the vampires coming to seek vengeance.

The 2 finishes were featured extensively in our outdoor and online campaigns and were well received by the industry.