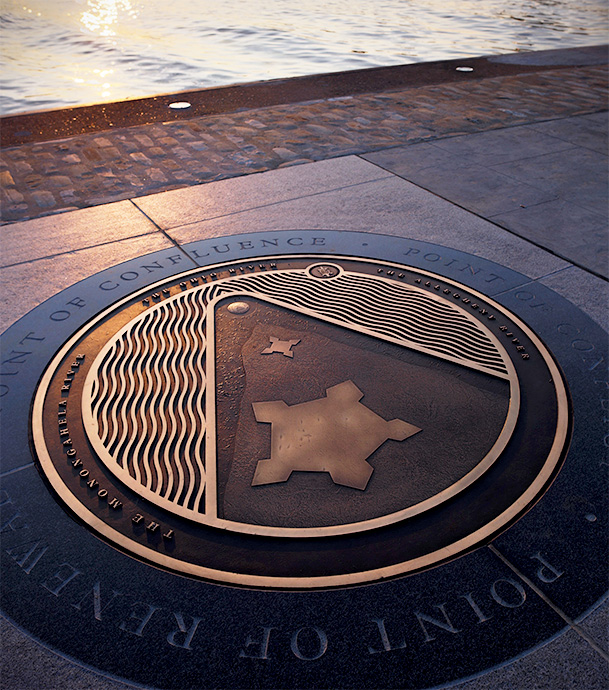 We were asked to conceive a public moment that marks the confluence of Pittsburgh's three rivers within Point State Park; It had to 1) imply a sense of The Point's historical importance (in the mid-18th century it was one of the most strategic places in the world); and 2) signal the terminus of the just-completed Great Allegheny Passage bike trail from Washington DC to Pittsburgh. There was a need to have that particular spot where people say, "Let's take the photo here."

The site, owned by Pennsylvania's Department of Conservation and Natural Resources, receives heavy usage. Known as The Point, it is the confluence of three rivers, and is the ground zero spot of the entire region. It sits within the just-restored Point State Park, itself a landmark of landscape architecture and urban park design. It is here that in the 18th century that Native American French, and British cultures - each with their own aspirations - collided. In coordination with our client at the Allegheny Trail Alliance, we devised a contemporary bronze medallion that suggests (but does not attempt to define) the importance of the place. Within the plaque are the outlines of the current river banks, the river banks as they were in the 1700s, the outline of Fort Duquesne (the French presence), Fort Pitt (the English presence), and a turtle icon (found carved in a tree at that time) that represents the Native American presence. Carved into a black granite surround are the phrases, "Point of Confluence," "Point of Conflict," and "Point of Renewal," which are the three interpretive themes of Point State Park.