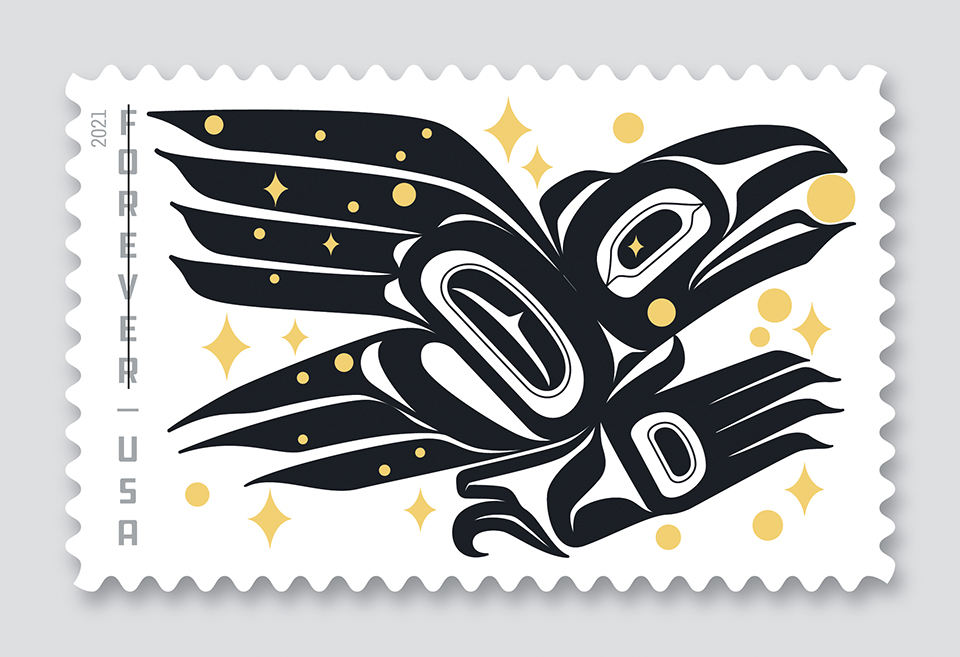 The assignment was to design a stamp for the U.S. Postal Service to honor the living culture and heritage of Indigenous peoples in an area of the U.S. The art director found an artist who is passionate about representing his hometown, his tribe, and his family through art and design.

Merging traditional artwork with modern design touches, this stamp represents a story of great significance to the Indigenous people of the northern Northwest Coast, part of the area that ranges from Southeast Alaska through coastal British Columbia and south into Washington state.

Inspired by the traditional story of Raven setting free the sun, the moon, and the stars, the artist of Tlingit/Athabascan decent depicts Raven just as he escapes from his human family and begins to transform back into his bird form. A five-fingered hand connected to Raven suggests the human form he is leaving behind.

To create the stamp art, the artist used formline, the traditional design style of the Indigenous people of the northern Northwest Coast. Formline relies on a stylized vocabulary of ovoids and related shapes, continuous lines of varying thicknesses, and ambiguous, even abstract patterns that often suggest both human and animal features to convey a sense of transformation and the oneness of all life.

The artist first sketched his design with a pencil before completing the image digitally. Bright stars were illuminated with gold foil during printing for dramatic effect.

The stamp has been widely praised for its beauty and the story it shares with the American public. After just seven months 88% of the stamps have sold.