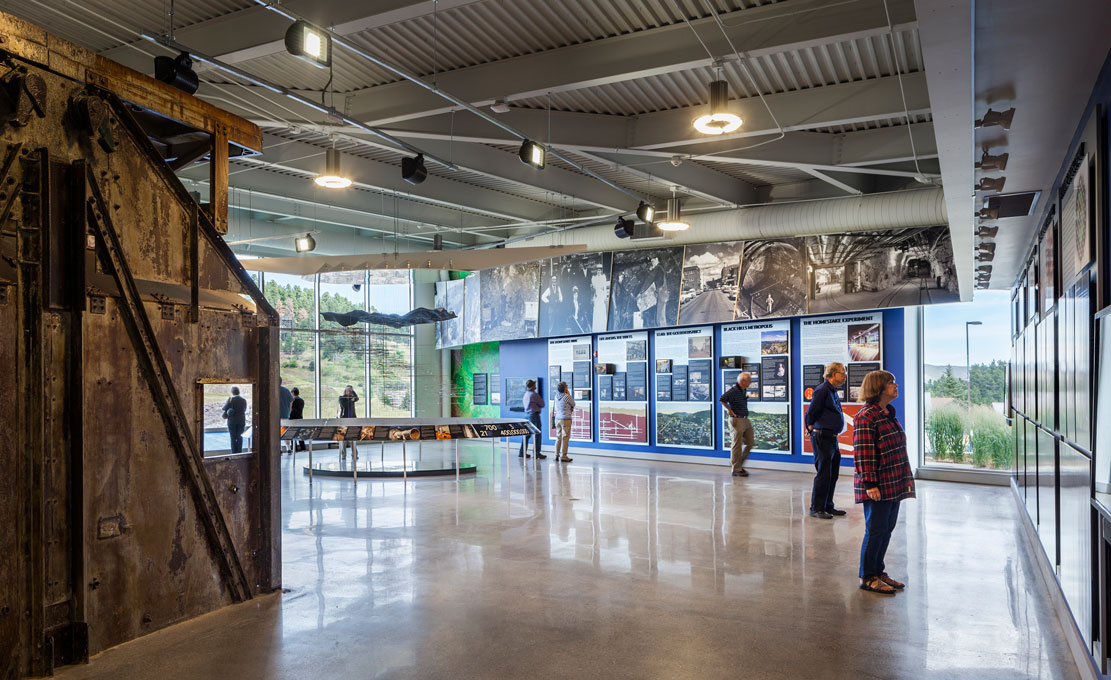 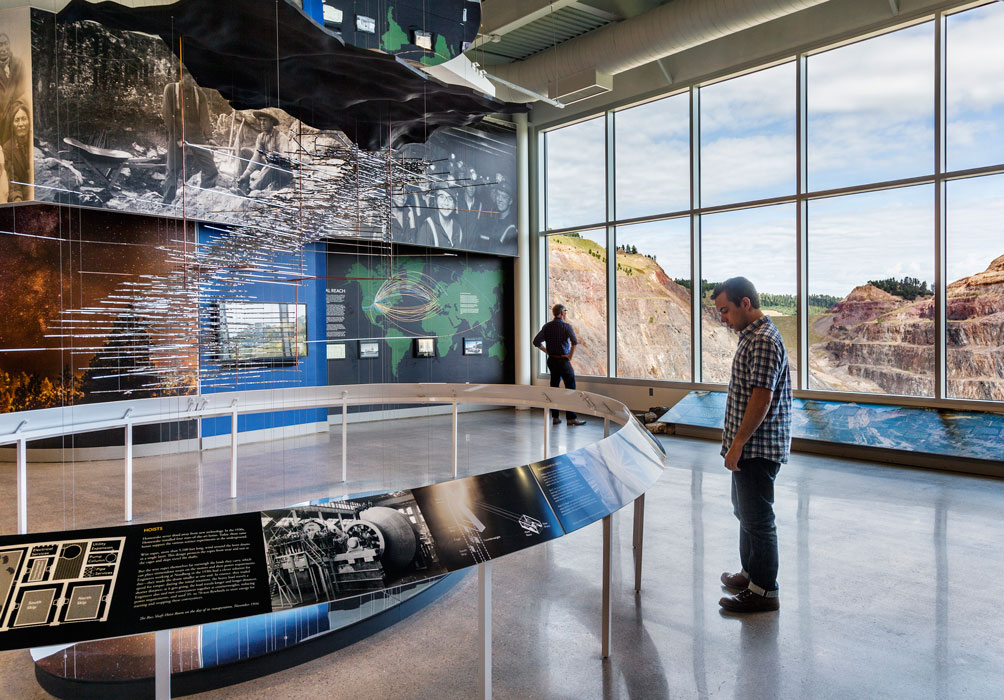 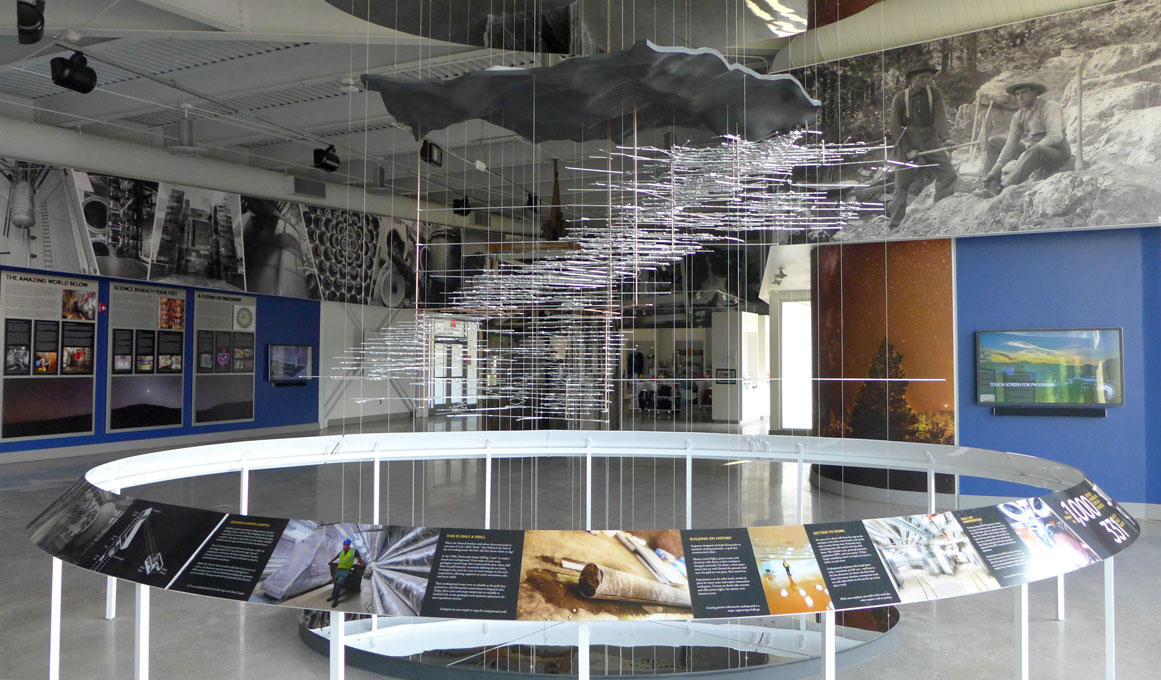 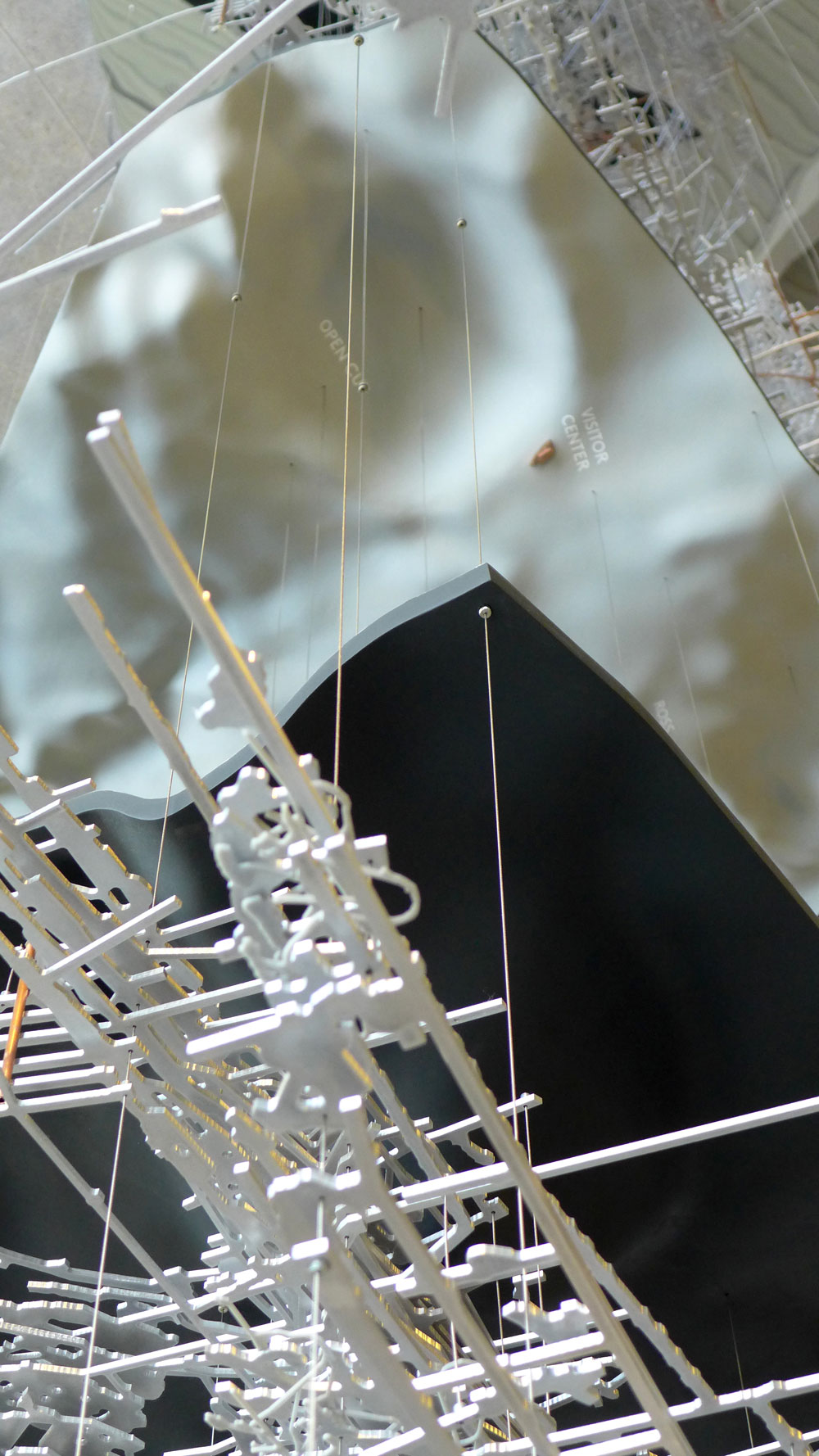 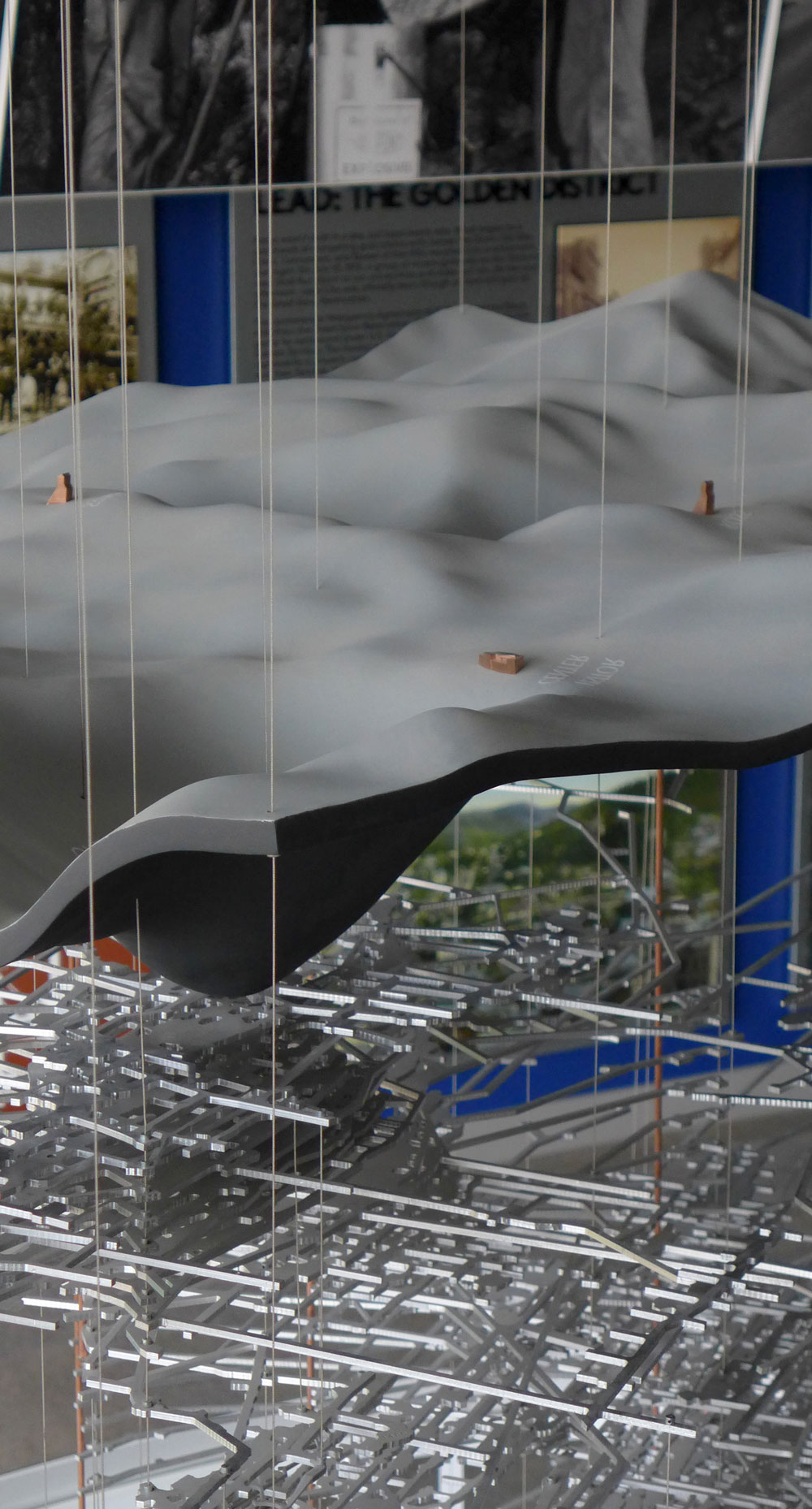 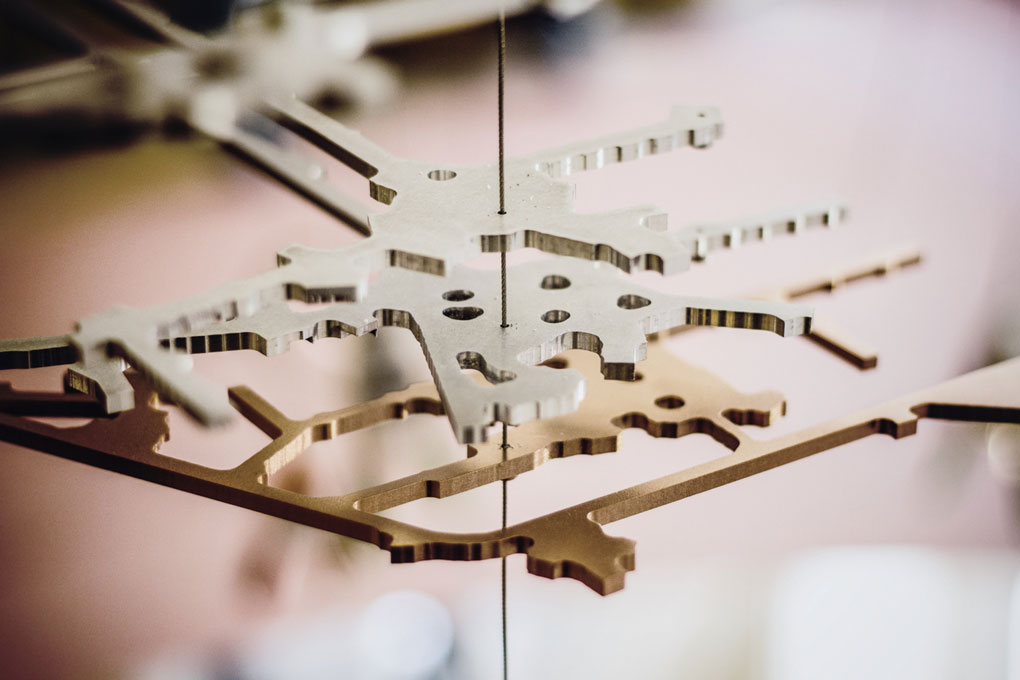 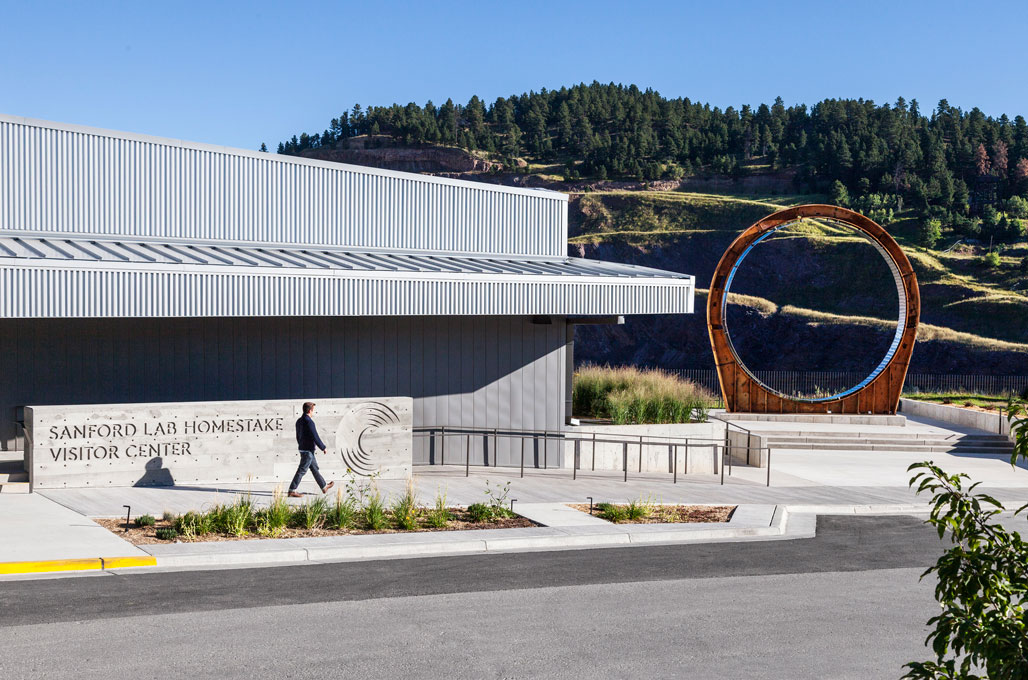 For 125 years, the Homestake Mine in Lead, South Dakota was the largest and deepest mine in the Western Hemisphere and the most productive gold mine in recorded history. The mine ceased operations in 2002, and in recent years its deep underground chambers have become home the Sanford Underground Research Facility and some of the most sophisticated physics experiments in the world.

C&G Partners was tasked with creating a wide suite of exhibits, media programs, and environmental graphics for the new Sanford Lab Homestake Visitor Center. The project had to present the complexities and geologic timeline of the mine era and Black Hills gold rush along with the visionary physics experiments deep within the mine that began with the neutrino detection experiments of Nobel Prize winner Dr. Ray Davis in the 1960s. Furthermore, the project had to reflect the Visitor Center's role as a social and cultural center for the City of Lead as well as housing the Chamber of Commerce office.

The Visitor Center exhibits are anchored by four centerpiece displays. A former elevator cage from the Homestake Mine, embedded into the Visitor Center Floor, contains a multi-screen audiovisual experience that simulates a descent to Sanford Lab's 4850 Level, rounded out with conversations between mining engineers, employees and physicists as they share the ride. The Visitor Center itself is built on the edge of an Open Cut, a ridged, one-mile across, half-mile wide remnant of the mine's surface operations and one of the most iconic geographical features in the Northern Black Hills. A 30-ft. window faces out onto this view shed, augmented by large interpretive panels that call out various aspects of the view. The Visitor Center's elements are also united by a continuous, 330-ft.-long mural of historic and contemporary photographs that runs like an architrave around the space.

But the most distinctive "anchor" in the space is the display called THE WORLD BELOW: a highly-detailed, 1500:1 scale model suspended between the Center ceiling and floor that depicts every manmade feature of the former Homestake Mine. After more than 125 years of continuous operations, the mine comprised 370 miles of tunnels (drifts), shafts and chambers, constructed on a colossal scale and reaching more than 8,000 ft. underground. THE WORLD BELOW also contains a scale mapping of Lead's contemporary surface topography – along with the mine's iconic surviving buildings (as well as the Visitor Center itself) – to give a visceral sense of the vastness that was the Homestake Mine. To stare out the window at the Open Cut—which itself is so large that one's eyes feel tricked—while realizing that that same cavity, within the scale of the model, is a scooped-out surface feature barely two inches across, forces a staggering visualization of just how vast, deep and productive the mine was. To us, THE WORLD BELOW represents what might be the very definition of creative peacemaking.

The effect of the Visitor Center on the City of Lead, population 3,500, has already been profound. The former center had only one year-round employee and one part-time employee in summer. The new center, with its more robust tours and calendar of public events, now requires two full-time employees, three part-time employees, and a team of guides and educators from May through September. Retail sales have been robust from Summer 2014 to Summer 2015 and are expected to increase yet again in 2016 due to the Visitor Center being added to many tour providers' itineraries and brochures.

Outside of measurable economic factors, the effects are nevertheless permeating the community. This small city, robbed of much of its economic drive with the closing of the Homestake Mine nearly 15 years ago, now has a major community center for events, lectures and tours. The Sanford Underground Research Facility, operating for more than five years in the mine's underground caverns, has a very public face at ground level, with exhibits that interpret these highly complex operations to locals, tourists and science enthusiasts alike. And at the center of that is our rendering of the incredible Homestake Mine itself, which can now be seen in its entirety, rather than pieced together from the scattered existing surface ruins and the Open Cut.