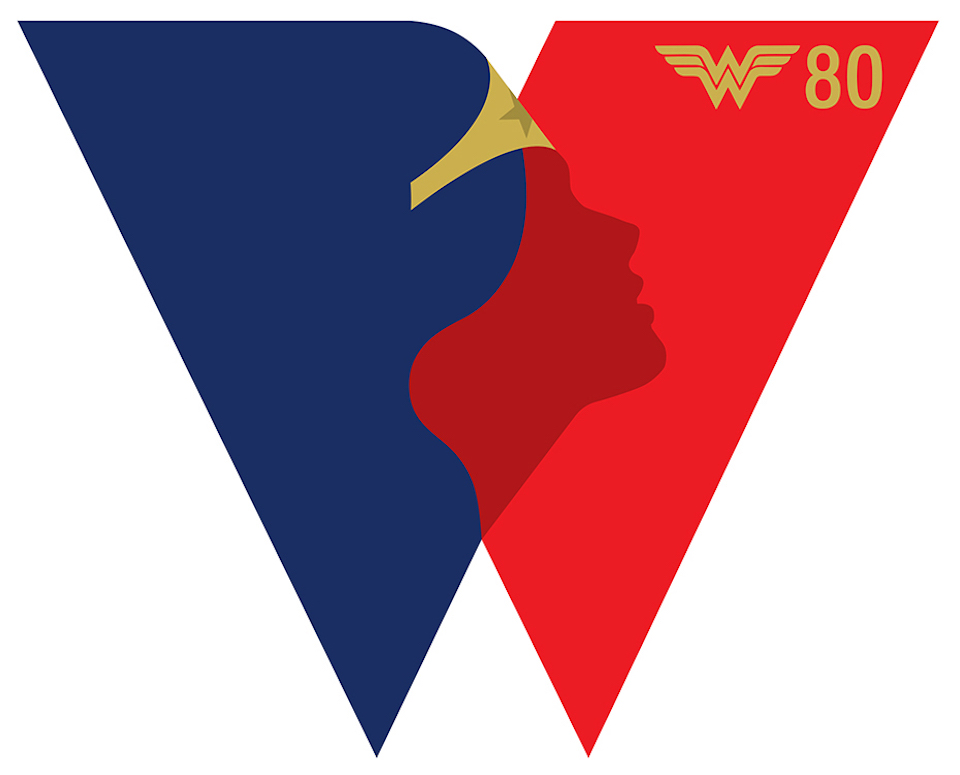 Acknowledge 80 years of history in a way that doesn’t focus on the length of time Wonder Woman has been present in pop culture but instead on the impact she continues to have and her ability to connect with/empower fans of all ages.

Explore a bold new direction for the franchise inspired by pop art and graphic influences. Ensure a timelessness to the design that feels relevant and recognizable when thinking about any of Wonder Woman’s eras - past, present, or future. Strive to create a personal connection with fans by relying on a silhouette as the main focal point, making it just as easy for the viewer to imagine him/herself in the visual as it is to imagine the iconic Super Hero.

Create a base featuring an all-new, graphic “W” design that plays host to a pop art silhouette of Wonder Woman and her signature tiara. Leverage the traditional colors of her suit (blue, gold, and red) to help define the different components of the logo and the character design, with the curvature of Wonder Woman’s tiara point/hair also establishing the curvature of the “W.” Show Wonder Woman looking both upward (reflecting a spirit of optimism and strength) as well as forward (reflecting a commitment to the future instead of simply celebrating the past).

The final logo creates an entirely new visual identity to serve as the cornerstone of Wonder Woman’s 80th anniversary campaign. By relying on modern graphics and pop art sensibilities, the logo does not attempt to recreate her first appearance in comics 80 years ago but instead visualizes Wonder Woman right here, right now. A refreshed franchise emblem along with “80” in text offer a subtle nod to the anniversary milestone without her age becoming a focal point. Instead, the eye rests on Wonder Woman’s timeless silhouette, which calls to mind her core values of strength, truth, compassion, positivity, justice, and equality...ideals she’ll continue to carry with her into the next 80 years and beyond.

The logo debuted during DC’s first-ever digital convention event, DC FanDome, on August 22 and was unveiled by none other than Gal Gadot, Lynda Carter, and Patty Jenkins. Its reveal served as the climax to a special panel in which Gal, Lynda, and Patty discussed Wonder Woman’s upcoming anniversary and what the character means to them. It was then immediately shared out on DC’s Wonder Woman social media channels, where it became a top-performing post in terms of likes, shares, impressions, and engagement. It also sparked immediate demand for products featuring the logo, which will be released throughout 2021.