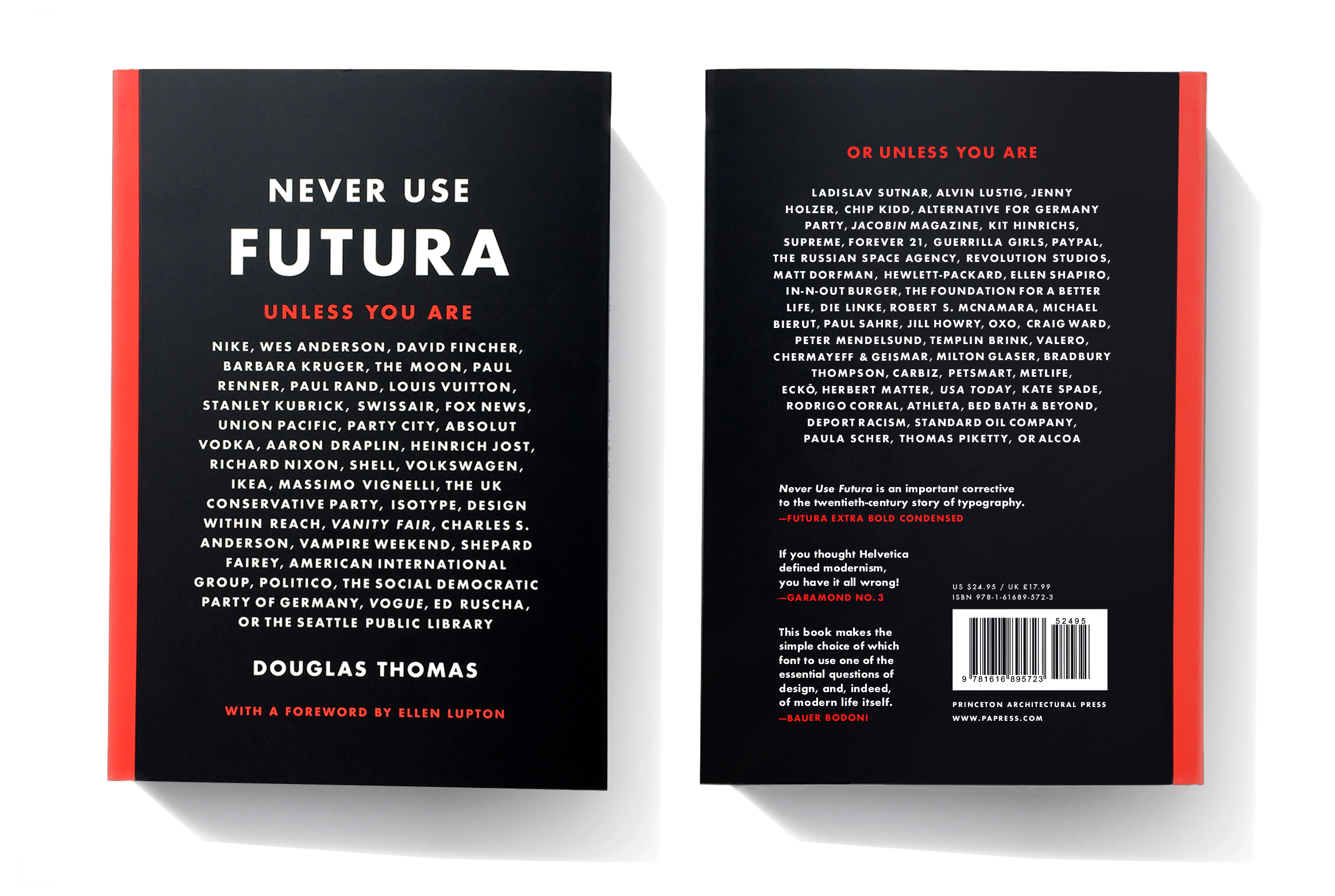 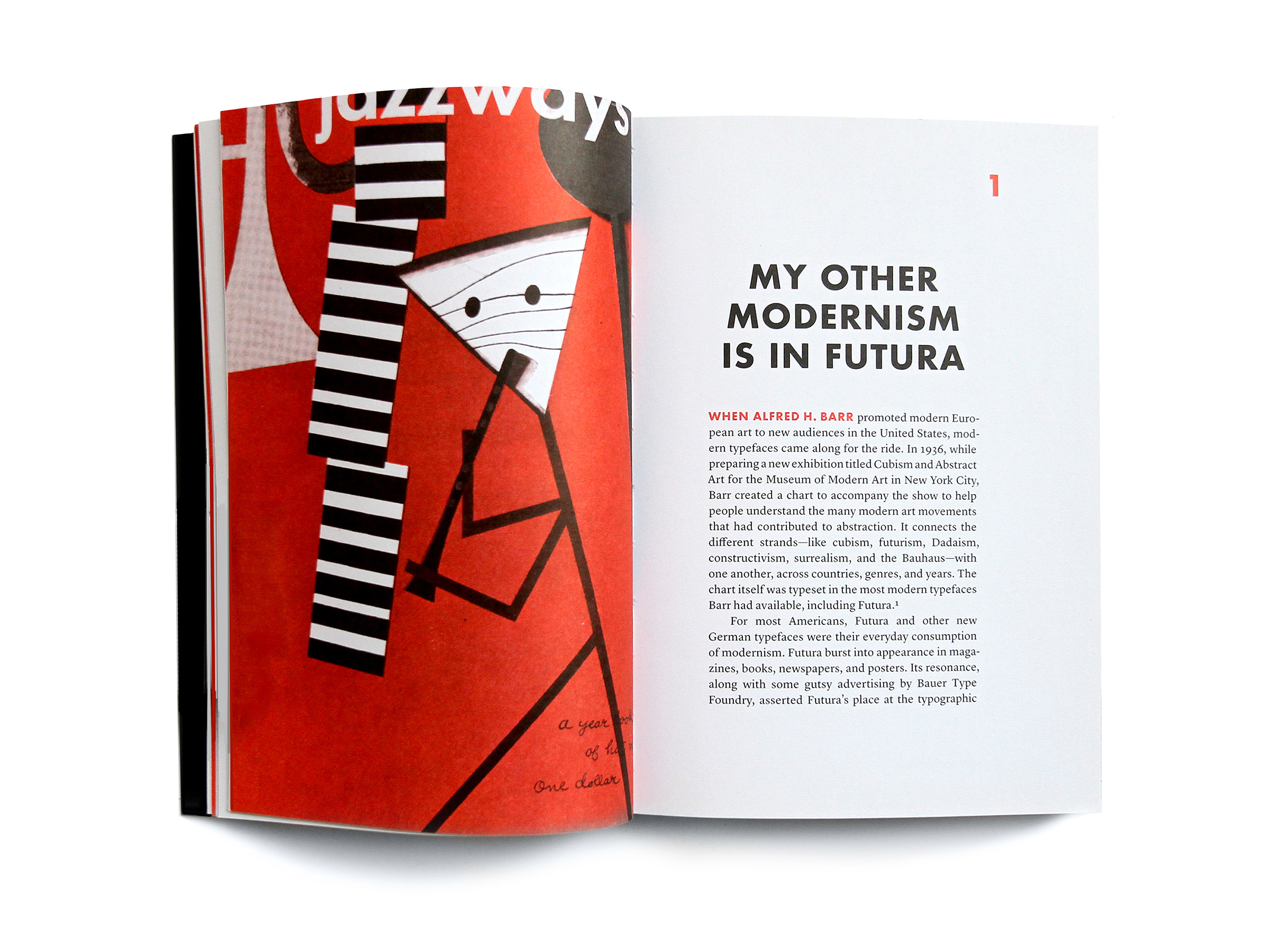 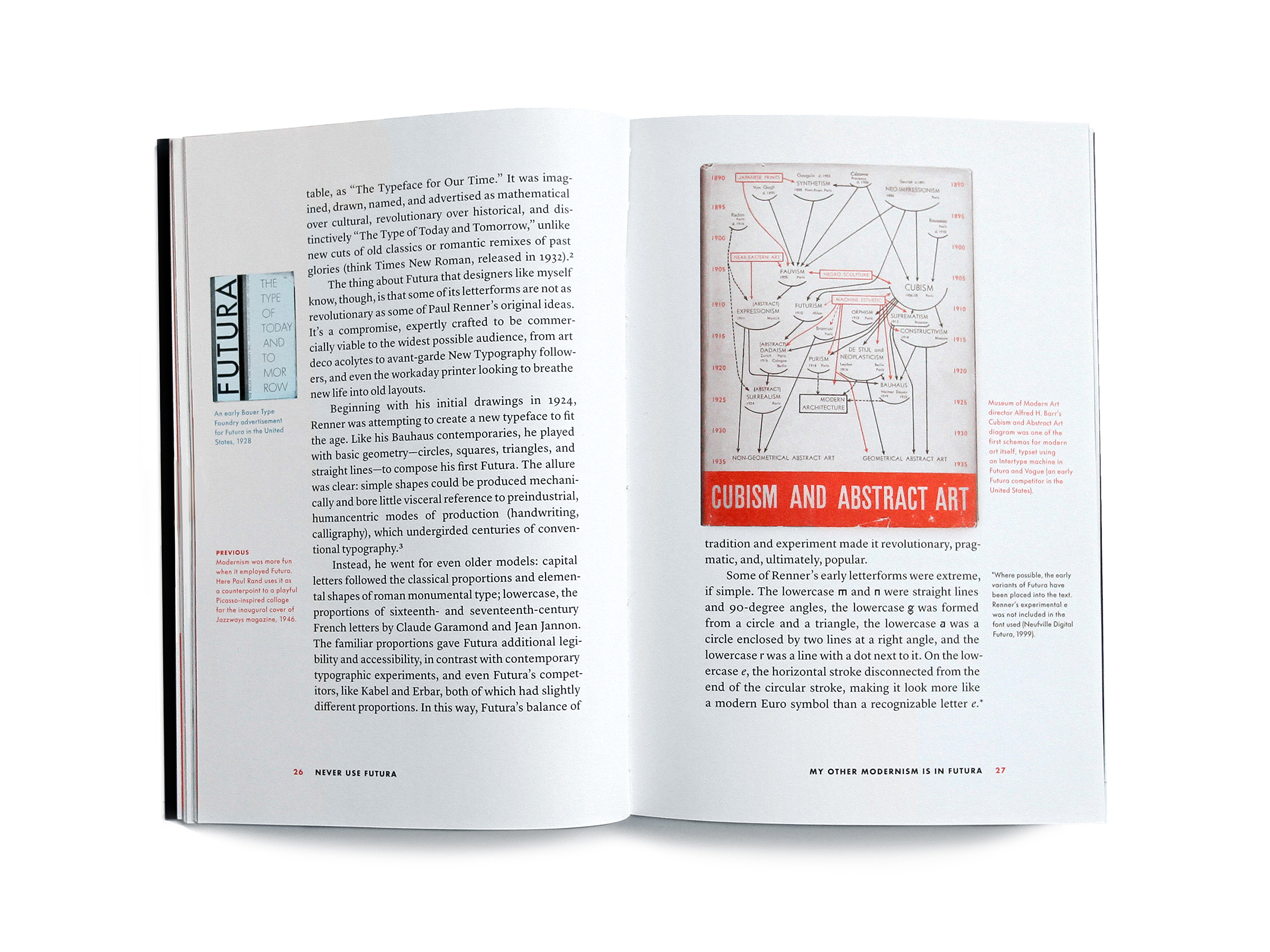 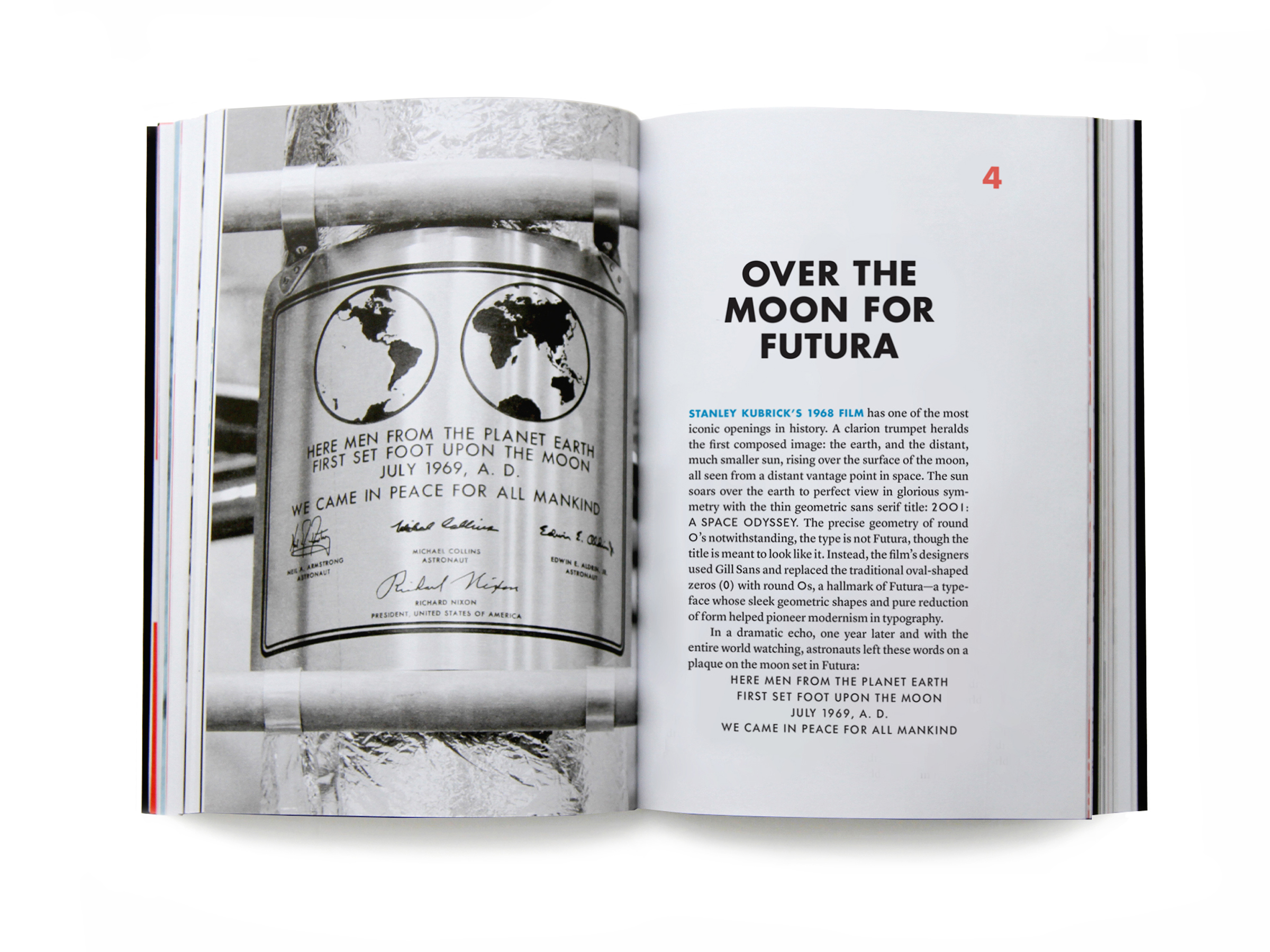 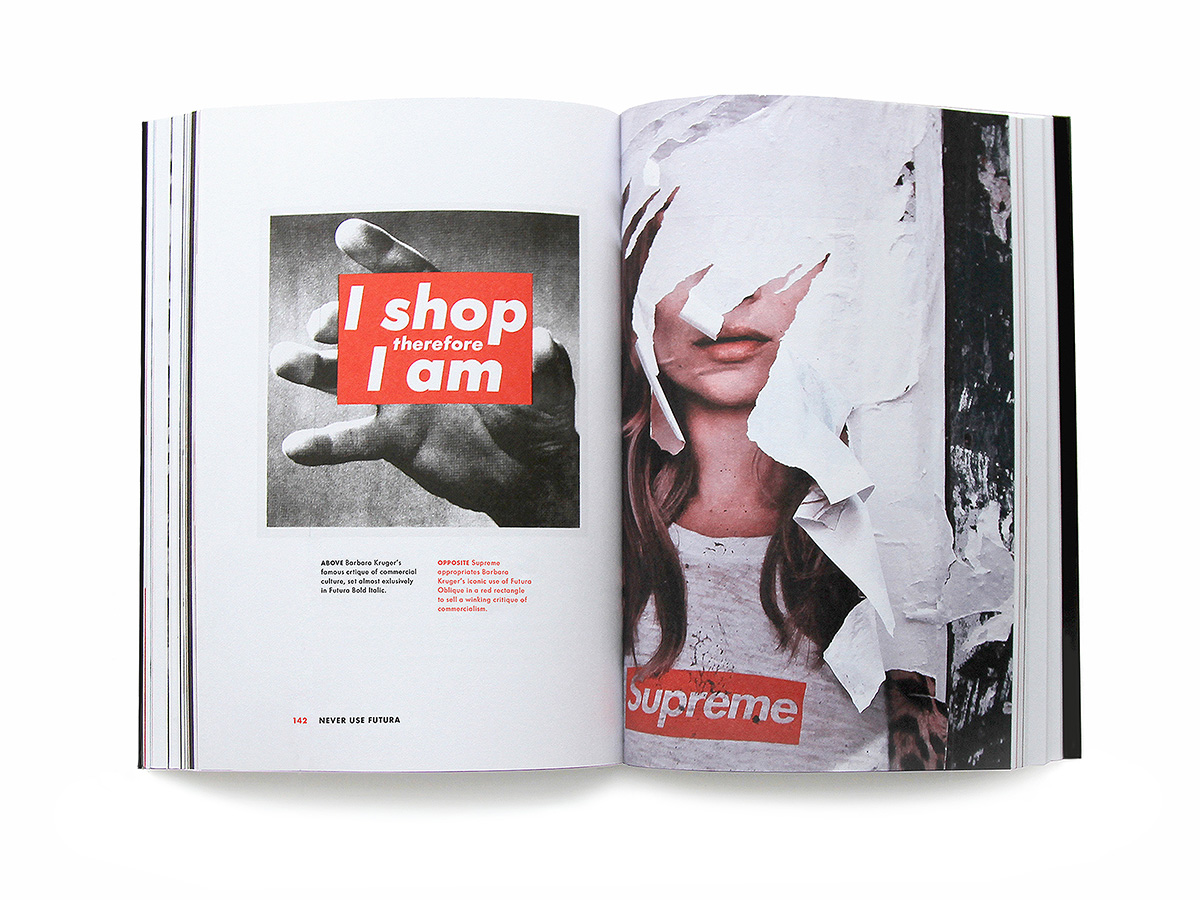 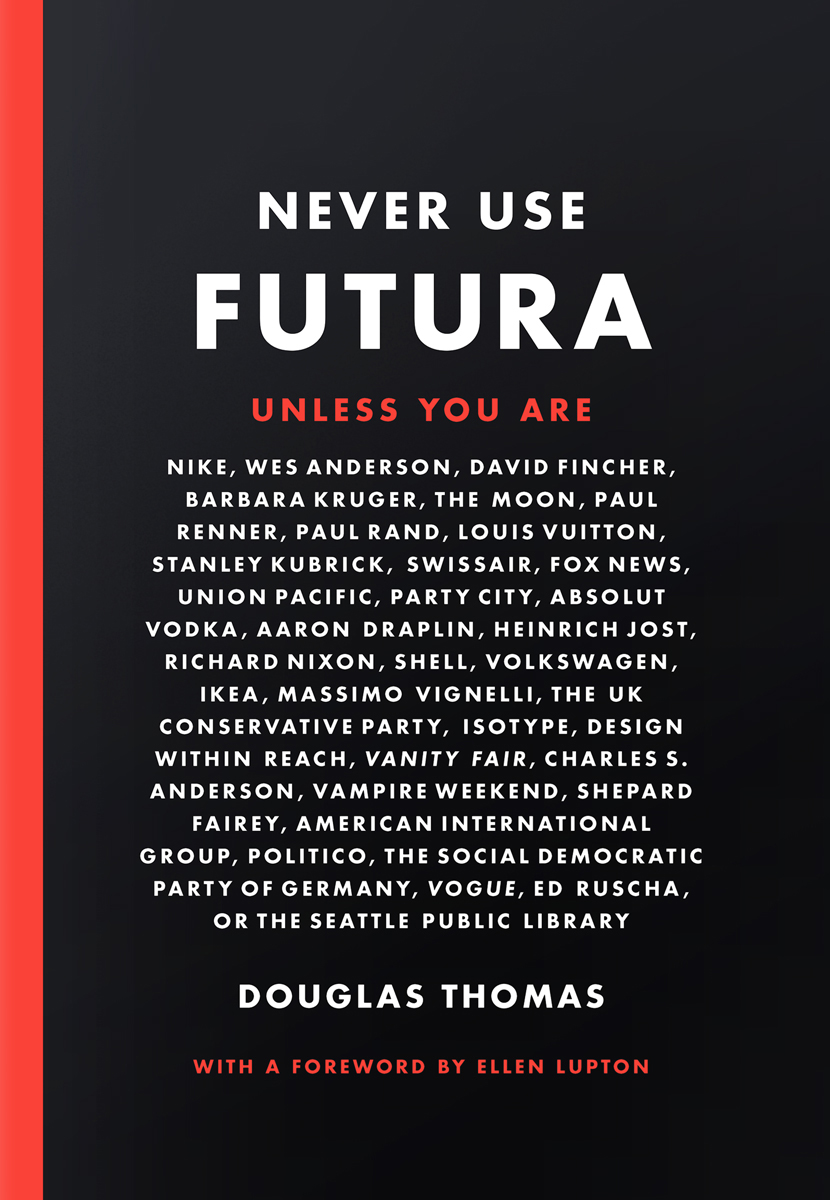 How to make a 90-year old typeface seem contemporary and relevant? Remind people of its effective use by dozens of brands, essential companies, and famous designers, and winkingly play off current conversations about typography that are often negative, all while showcasing the typeface at its best (and worst).

The book cover had to appeal to designers, typographers, and yet be approachable to a wider audience of students and associated creative fields who would know little about the typeface Futura or its history. For the interior, the design needed make the text easy to read and provide visual evidence of the cultural importance of the font. The title, Never Use Futura unless you are... followed by a long list of designers, brands, and artists, was designed and written to be a provocation—to be an ironic twist on typical advice given to students and young professionals to never use Futura (or insert popular type here) that older professionals have long ago made famous and continue to make relevant. On the interior, images had to be juxtaposed to support the text and tell culturally relevant stories on their own.

The entire book was printed in three colors: Black, Pantone Warm Red, and Pantone 801 Blue. This was done to help unify 90 years of disparate typographic history into a single visual style, making dusty old type specimens feel as fresh as contemporary designs. It also meant that every image had to be specially color separated for the printing.

The book was printed in June of 2017, sent to early reviewers in September, and released for public purchase on October 16, 2017. Princeton Architectural Press distributed the books to museums, bookstores, and online merchants through Hachette Book Group across North America, United Kingdom, New Zealand, and Australia. The initial book run was 3,000 units which were sold out in early 2018. The book is currently in a second printing of 5,000 units and has already been sold to Polish, Chinese, and Korean publishers for foreign editions.