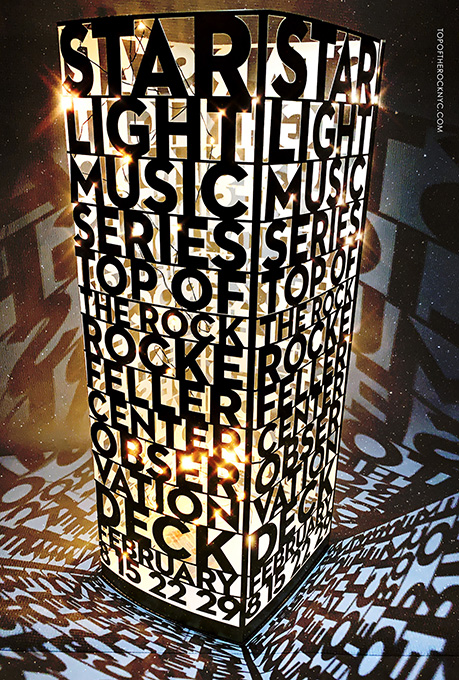 The project brief was to design a promotional event poster for Starlight Music Series at the Rockefeller Center. The focus of the project was to utilize experimental typography to convey a message to a target audience. Style, weight, texture, emotional impact, and composition was also explored. Emphasis was placed on materiality and both its application to letterforms and visual meaning.

The Rockefeller Center was built in the 1930’s and its main architectural style is Art Deco. I wanted to reflect this history through the design so I opted for an art deco style typeface, Neutraface, to keep this 1930’s design influence.

My process consisted of laser cutting my typography into poster board and constructing a tower to represent the dimensionality of the Rockefeller building. I placed string lights inside of the laser-cut tower to create 360 degrees of dramatically cast shadows and to create unique light effects. I photographed this piece and made minor digital adjustments, subtly adding an overlay of stars to the composition.

I believe the outcome of the poster fulfilled the brief of creating experimental typography that uses materiality to reflect the event being advertised. The goal was to design a composition that would be interesting, impactful and make viewers want to stop and spend time with the poster, and this was how the design was received.