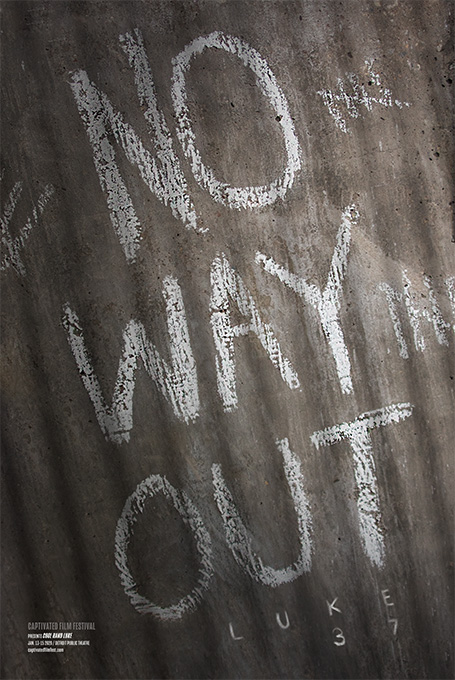 Title
No Way Out

For this assignment, I was asked to conceptualize and execute a poster for the film, "Cool Hand Luke." In addition to showcasing the film, the film also had to promote a film festival. For the film festival, I chose to focus on movies of the prison genre. A requirement of the assignment was to hand-manipulate the headline. The poster also had to showcase qualities of a fictional film festival (I chose Captivated, a film festival that revolves around prison-focused films). For the assignment, students were asked to refrain from using the film's title as the main headline of the poster.

To convey a prison scene, I handwrote the typography with chalk in the garage of my apartment (and washed it off afterward). I added tally marks to the composition to make it seem like a prisoner was keeping track of how many days they'd been in prison by scrawling on their cell's wall. The subtle addition of shadows, created in photoshop, hint at prison bars without overpowering the composition. In addition, I added a light source coming in from the right of the composition via photoshop to further facilitate an ominous and dark tone. I decided on the headline "No Way Out," because it captures the confinement of prison and the inability of Luke in "Cool Hand Luke," to fully escape
from prison and its tortures.

Overall, I feel like this design succeeds in conveying both the film and the film festival. It hints at what both are about through the use of hand-manipulated typography and visual imagery. The design takes on a mysterious and omnious tone, setting the scene for both "Cool Hand Luke" and the film festivial, while not giving away too much of the plot.