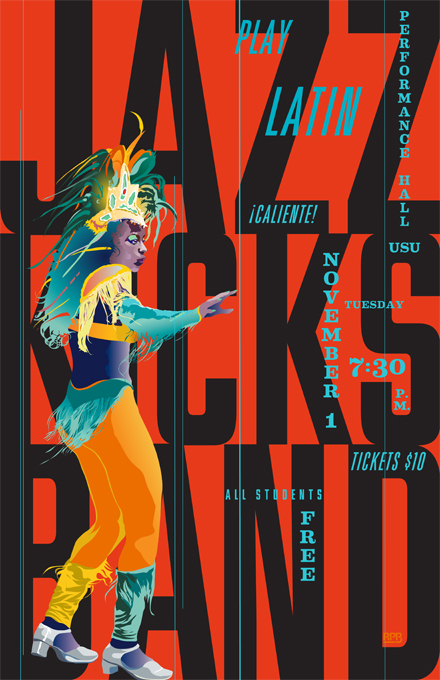 This poster was designed to advertise a concert performed by the Jazz Kicks Band, a band organized by band leader Larry Smith. Mr. Smith is a professional saxophonist and Professor Emeritus in the Music department at Utah State University. The target audience is varied: the University community, junior-high and high school music students and townspeople residing in Northern Utah. The Kicks Band concerts provide an all-too-rare opportunity to hear live jazz in this area and the goal of the poster was to get the attention of the target audience.

Just the words, “Latin Jazz”, whether Afro-Cuban inspired or Afro-Brazilian inspired, conjure up the image of percussionists whipping the dancing audience into a controlled frenzy. This type of jazz has roots in simple African rhythmic patterns, which were then seeded with both European and New World instrumentation and composition. New Orleans second line brass band music, early blues, flamenco, tango, bossa nova, clave, and tresillo all can be heard in the heady mix of jazz known as “Latin.” November brings to this community a plethora of pre-holiday entertainment of all kinds and posters out in the public eye are competing for every glance of attention. Using large black type against orange, with the poster information specifics floating in the foreground, it was my version of tresillo rhythmic percussion. I knew that the Kicks Band was going to be especially hot for this performance so I added an image of a sultry “habanera” dancer from a group of percussionists and dancers. I had stumbled on to them a few years ago, while they were parading through the largely empty, early Sunday morning streets, in Sevilla, Spain. The streets didn’t stay empty for long. I hoped in this medium the dancer would inject a bit of that frenetic energy performance into the poster–helping to maybe transform an interested glimpse to an admission ticket.

The Jazz Kicks Band added more percussionists to the band for this performance and the band was hot! Piece after piece, I envisioned flames coming off the hands of the percussionists and the bells of the brass instruments. The enthusiastic crowd loved the well-attended stellar performance. It was perfect high temperature music for a cold November night.