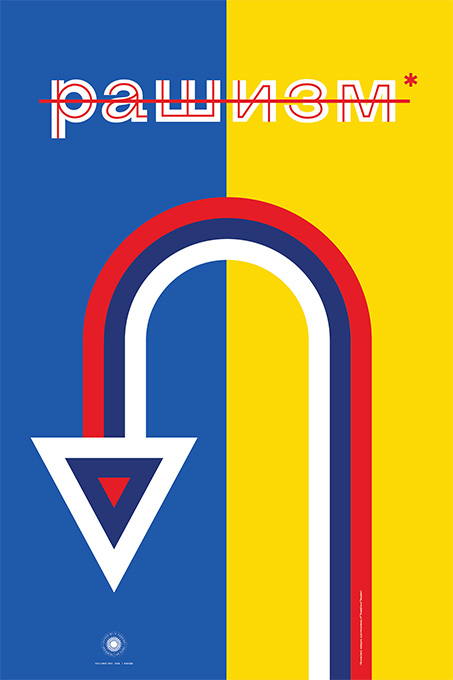 Our approach is to promote peace/Ukrainian power through graphic devices and terms that have been specific to the war thus far. The main graphic arrow is a reference to the road signs Ukrainian soldiers have altered (both directionally and typographically) as a method for confusing the onslaught of Russian troops invading.

The poster headline reads "Rashyzm" in Ukrainian. "Rashyzm" is a portmanteau of "Russia"and “fascism”. It is a term used by scholars, politicians and publicists to describe the political ideology and social practices of the Russian authorities of the late 20th and early 21st centuries.

Through the juxtaposition of the Ukrainian and Russian flags, usage of a Ukrainian typeface (KyivType designed by Dmitry Rastvortsev,) and symbolic graphic choices, we hope this poster will serve as a reminder that Ukraine is fighting this war not only for their land and people, but for the ideologies that keep them independent and free.