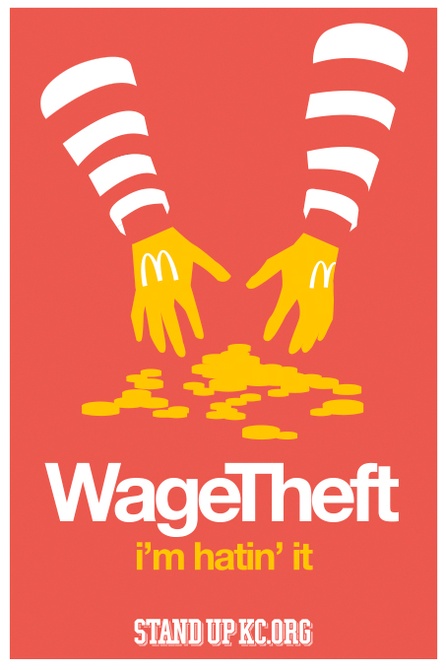 design a poster for use in fast food worker demonstrations that summarizes workers' problems with wages stolen from them by mcdonald's and other fast food corporations.

we combined a parody of the common "i'm lovin' it" slogan with ronald's hands to show in a very direct and immediate way who was committing the crime. the nature of street demonstrations demands a quickly decoded message and our quick timeline demanded straightforward vector production processes -- no time for hand models or beautifully lit photography.

this poster has been used in several local actions that have put pressure on mcdonald’s to stop stealing worker’s pay locally as well as at a national-level action to shut down mcdonald's corporate headquarters in chicago. workers and allies have held press conferences and large scale demonstrations in front of mcdonald stores to pressure the company to stop stealing workers’ pay and these posters figure heavily into the visual scene. the strong imagery used at these actions provided a succinct visual narrative that worker’s pay was being stolen by mcdonald’s. additional posters also visualized the solution, which was workers forming unions to protect their pay.

this poster has shown up in national and international press outlets both in print and on television, which speaks to the power of the posters to tell the story of both the problem and the solution that workers are organizing to address.