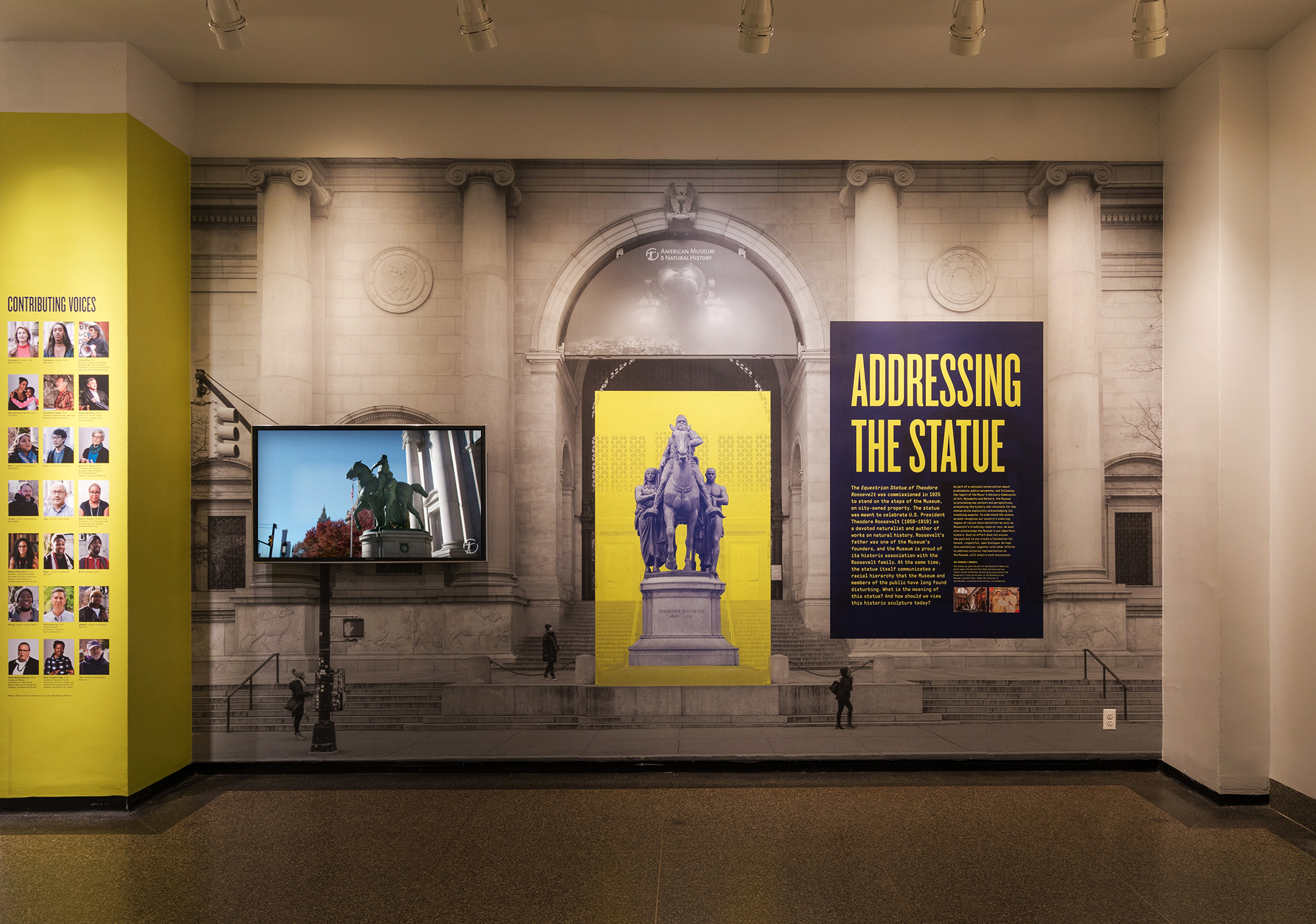 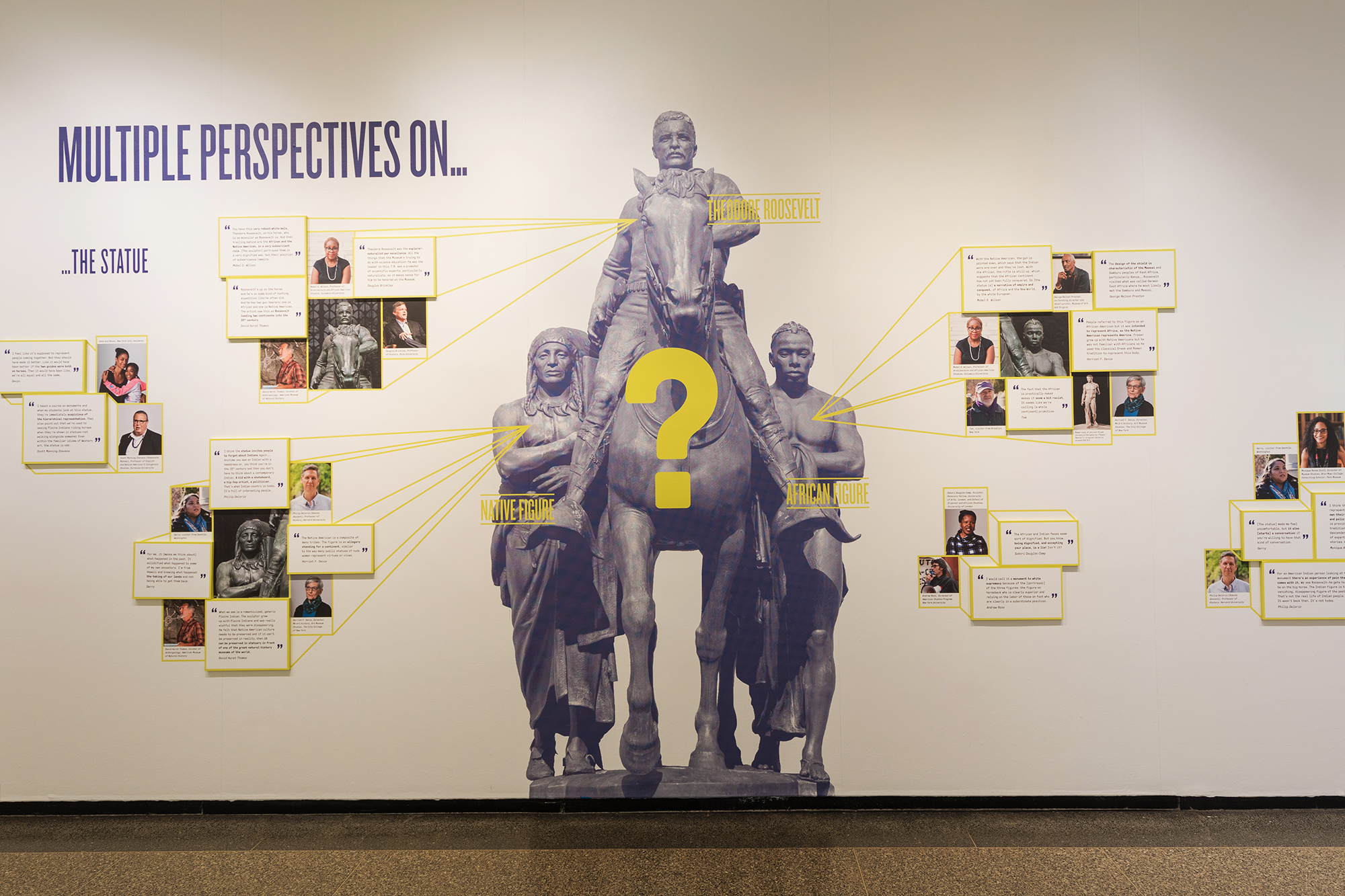 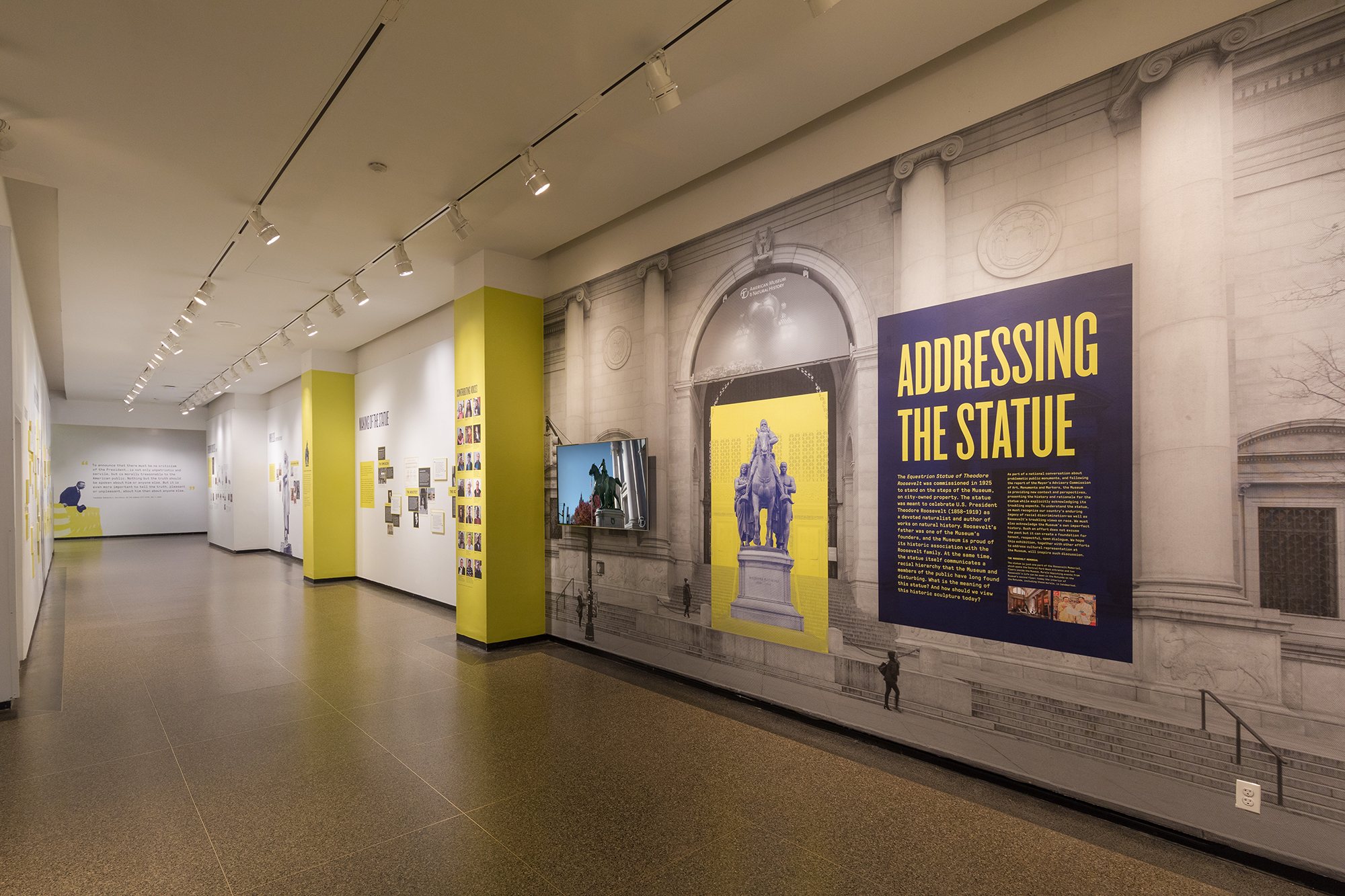 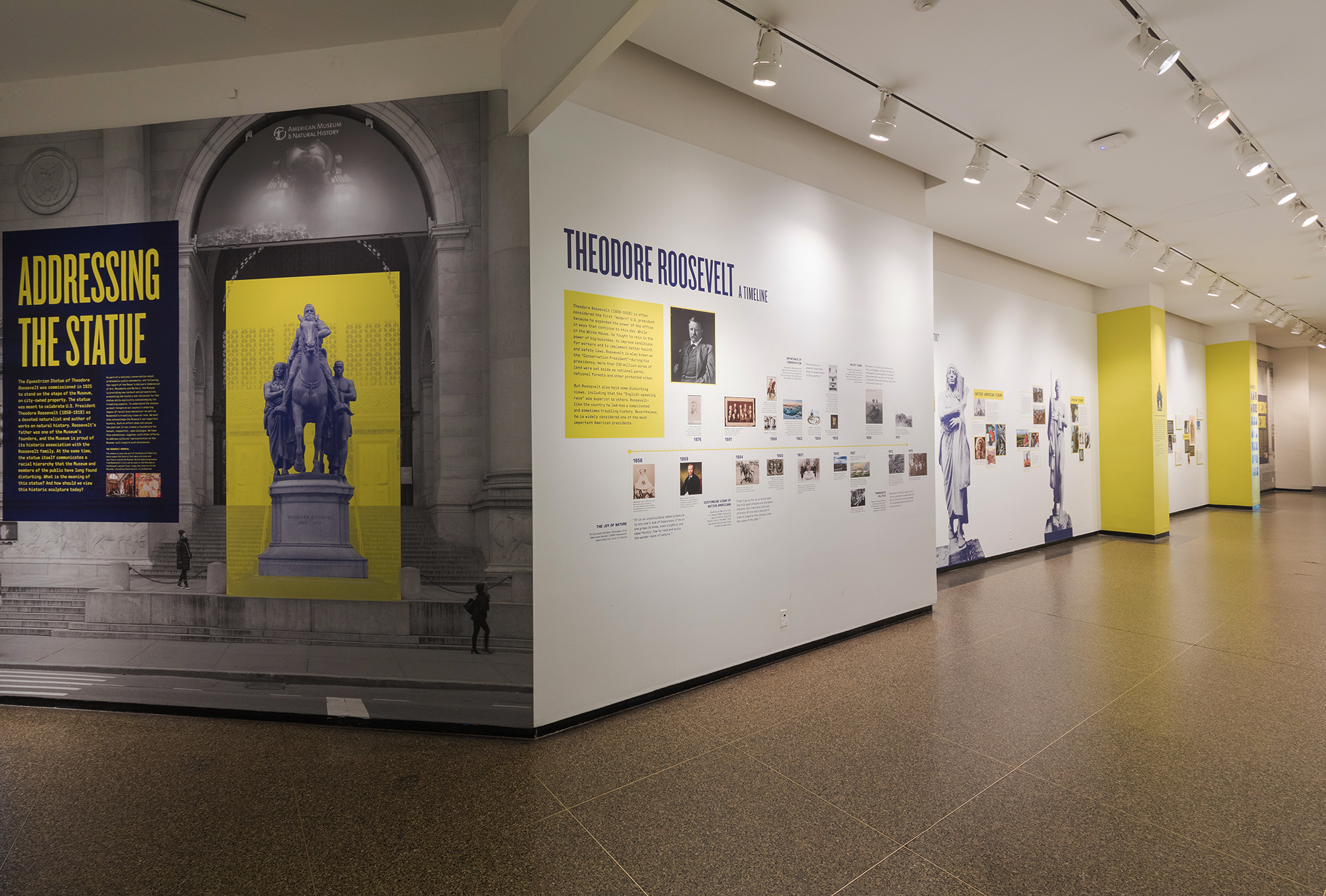 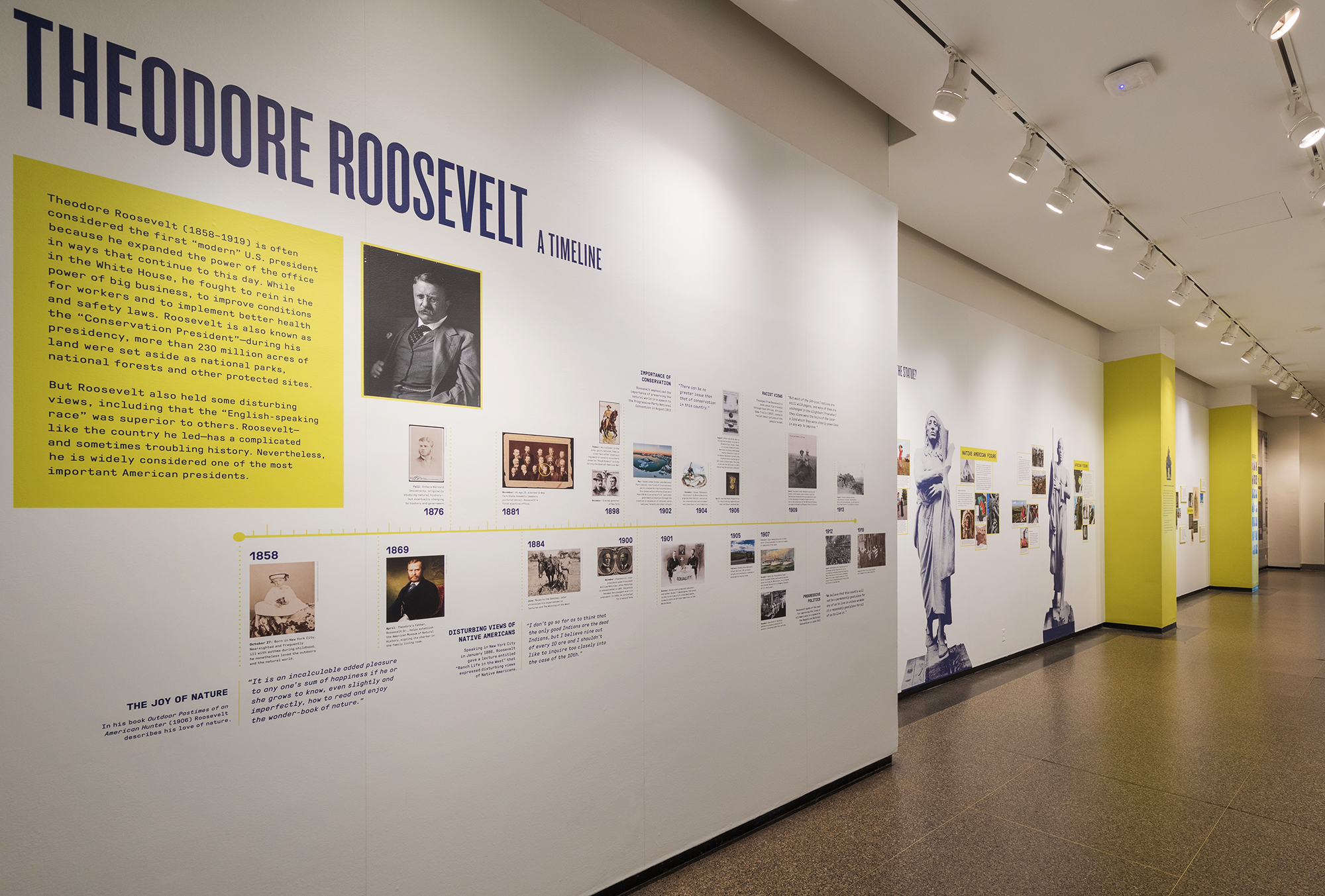 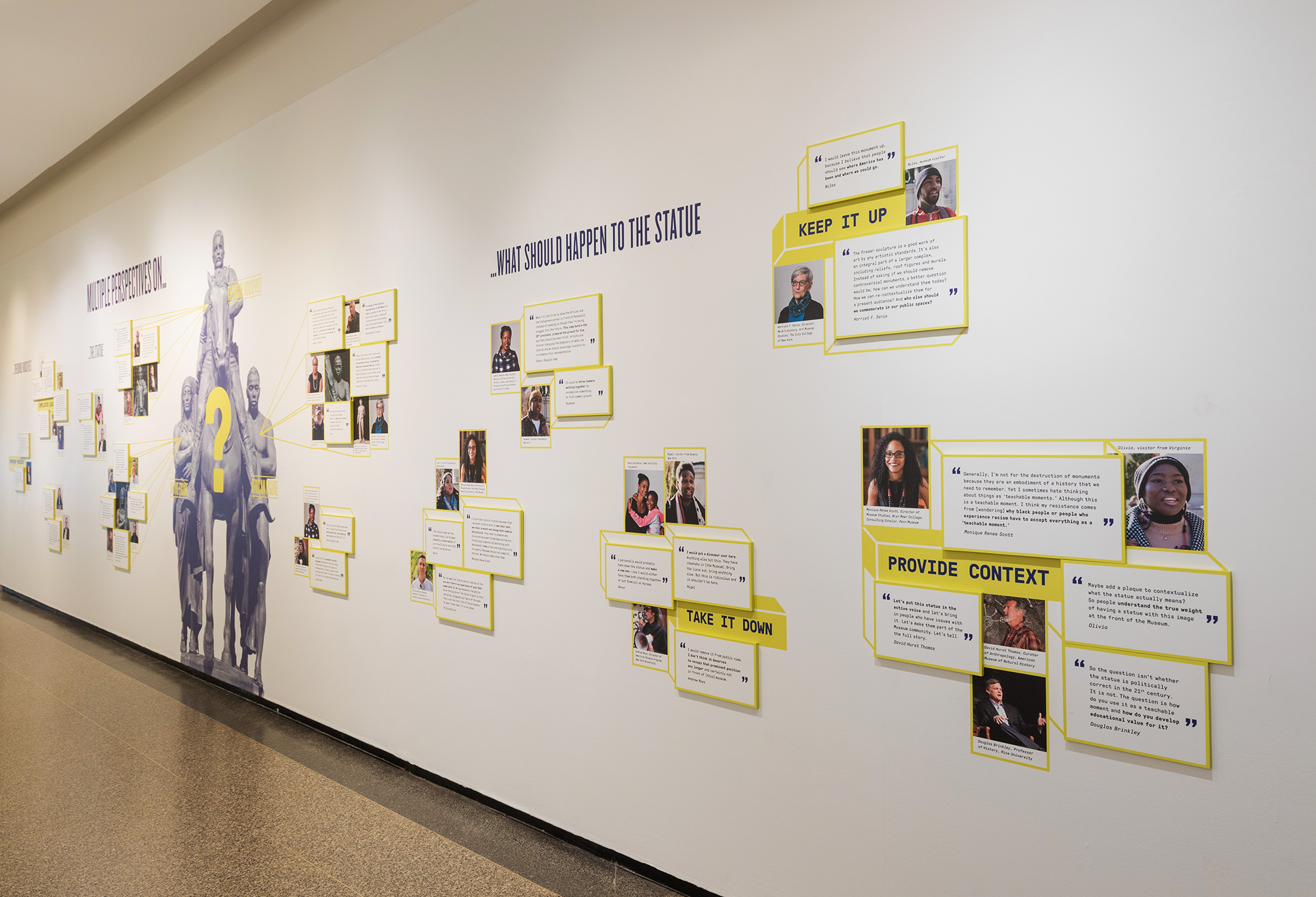 A statue unveiled on the front steps of the American Museum of Natural History in 1940 depicts Theodore
Roosevelt, the 26th President of the United States, riding on horseback, flanked by two unnamed men—one Native, the other African—walking below. For decades, this statue has raised questions: should it be seen as a heroic group, or a symbol of racial hierarchy? What was it intended to mean then, and how should we understand it today?
To provide museumgoers and the public with greater context, the Museum created Addressing the Statue, comprised of a temporary exhibition, a 15-minute video, a website through which the public is invited to submit comments, and signage at the statue with a link to the website and video. The project draws on new archival research and interviews with a diverse group of experts as well as people on the street. The project offers no simple answers, but instead presents many perspectives and invites viewers to come to their own conclusions.

The installation, in a high- traffic circulation area, aims to render these multiple perspectives visible. On one side of the space, the statue is contextualized: a bay explores the history of the statue and its creators; one presents a timeline of the life of Theodore Roosevelt (not always well- known to the international audience of the museum); and the largest bay is devoted to the anonymous men who flank the statue. On the other side of the hall, the problematic monument is treated as an annotated object, overwritten by questions and dialogue. A large question mark on the statue establishes the tone as one of critique and inquiry, rather than celebration. Quotes from people on the street as well as historians, curators and activists create a constellation of different moments. The boxes and rules of the
design were inspired by the language of digital annotation. The words themselves in this case become the object; they are mounted off the wall while the statue itself is wallpaper, set back using a muted duotone and a dot screen.

The design challenge for this installation was to make the voices of the many commentators visible, and to convey the idea of multiplicity of viewpoints. The intent was to evoke and provoke dialogue around a problematic monument, rather than provide one "answer".
The monument is treated as an annotated object; dialogue radiates outward from the central image, organized in content clusters. Throughout, both the image of the statue itself and the "museum voice" interpretation literally act as the background to the voices of the people interviewed for the project: their voices pop off the wall on box mounts with edges highlighted in green.

The project consistently captures the attention of visitors in a circulation area; it has generated an enormous amount of dialogue among the visitors and within the museum community itself.