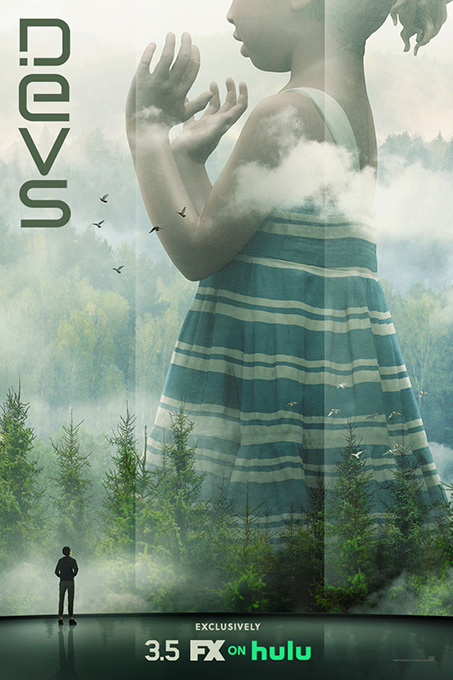 Devs is science fiction thriller murder mystery mini-series from film maker Alex Garland (Ex Machina, Annihilation). The story is about software engineer Lily Chan who works for a quantum computing software company known as Amaya. After her boyfriend is mysteriously murdered during his first week on the job at the top-secret development portion of Amaya known as DEVS, Lily becomes embroiled in a hunt to uncover the truth about his death, and what the top secret DEVS lab is really about.

The company is named after the CEO’s deceased daughter Amaya and her image not only serves as a brand icon and logo but also a giant Statue-of-Liberty-sized sculpture towering over the campus’ Northern California Redwood trees like an idol to be worshipped. At the feet of this statue is where Lily’s boyfriend's body is found burnt to death in the pilot episode. We chose to feature a moment that captures a small, silhouetted Lily peering out through fog and gray light coming at the giant God-like statue of the little girl. This felt very David and Goliath to us and at its core this story is very much that: aspect to one person trying to uncover the truth ends up taking on big tech business that operates in a lawless space without regard for humanity. The image of Lily gazing out at Amaya could be a moment from the show but presented as key art it creates a mysterious, surreal, and dreamy science fiction oriented piece that hopefully engages the viewer and leaves them wanting to know more about what is going on in DEVS.