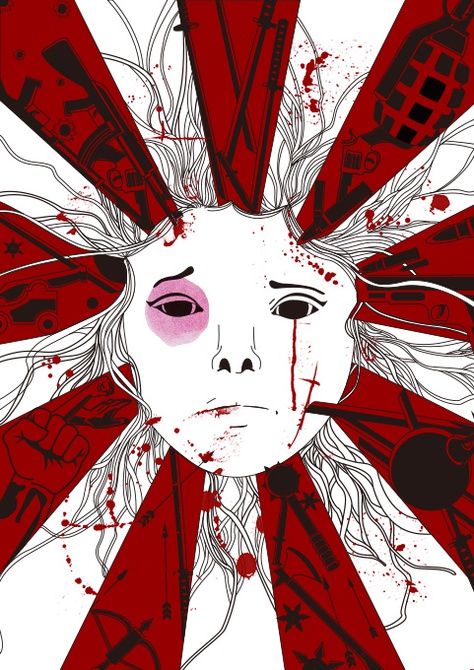 2012 London Olympics gymnastics team came out wearing a Rising Sun Flag drawn uniform.
As a result of this, I began to investigate what I thought about Rising Sun Flag as a world-wide recognition, so that I would wear the Rising Sun Flag drawn uniform that was used as a war crime in the international game.I also knew that I did not know the meaning of the Rising Sun Flag except Asian countries, especially Korea, and I was indiscreet because I did not know that the meaning was the same as Hacken Kreitz, which is a symbol of Nazi.
So Rising Sun Flag needs accurate recognition. This created a poster for many painful and informative Southeast Asian countries and made it a poster using illustrations to express the symbols visually and flexibly in pain.

Rising Sun Flag In order to express the correct perception and the pain and suffering contained in it,
The weapons and violent elements used in the invasion were expressed in the form of red light, a symbol of the diary.
Instead of the red circle, which is the symbol of Japan in the center, it expresses Oriental people who were dominated by Japan at that time. It emphasized the pain of violence by visualizing the female face of the symbol of abuse, the hair of tangle and the face of bruise.
Also, because it is a past and history that should not be forgotten, the whole color was black and white, and red color was used to express the color of blood, which is a symbol of violence,