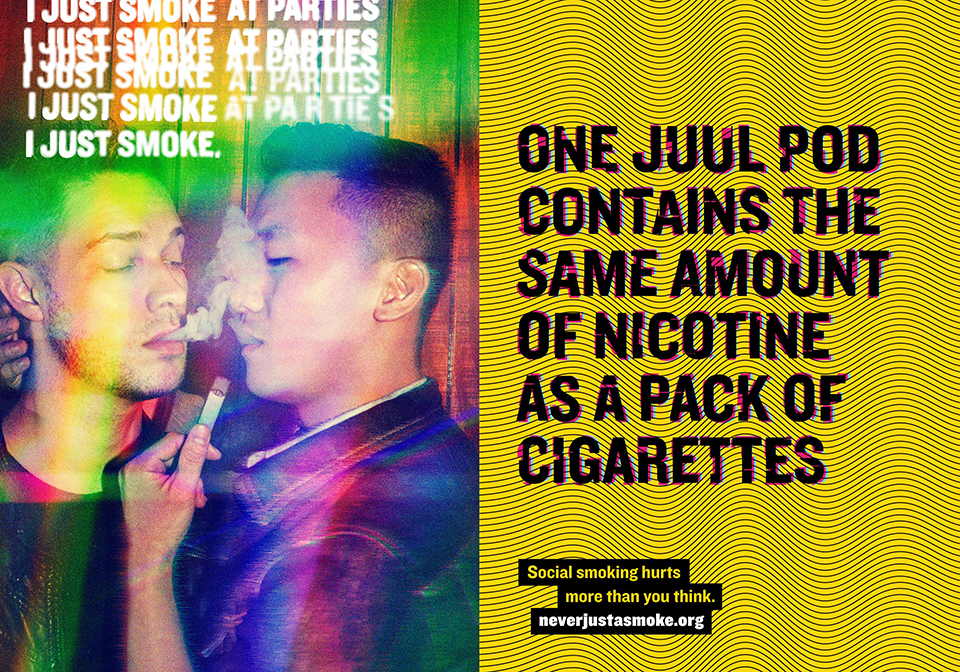 California Tobacco Control has spent the last three decades making tobacco less acceptable. And a generation of social norm change has helped push the cigarette into a state of slow decline. But tobacco companies, and Silicon Valley-backed “disruptors” like Juul, have responded with products that don’t look, smell or taste like cigarettes. So despite the steady reduction of identified “smokers,” poly-tobacco usage among Californians 21 to 34 has actually increased.

Our job was to wake these social smokers up to the fact that low and intermittent smoking still carries great risk and that e-cigarettes aren’t a safe alternative. Research showed that only 28% of social smokers believed that Juul even contained nicotine. So armed with the info that they don’t think they’re smokers and they don’t think vaping is smoking, we had to reimagine our entire approach.

In print and outdoor, we depicted social smoking scenarios real enough that our target could have that “Aha” moment and see themselves for what they are: smokers in denial.

Our tracking study showed awareness of nictotine’s presence in Juul products increased by 32%. And, most importantly, a social smokers’ likelihood to identify as a smoker increased by 26%. And of those that did identify, nearly half were compelled to stop using tobacco products altogether.