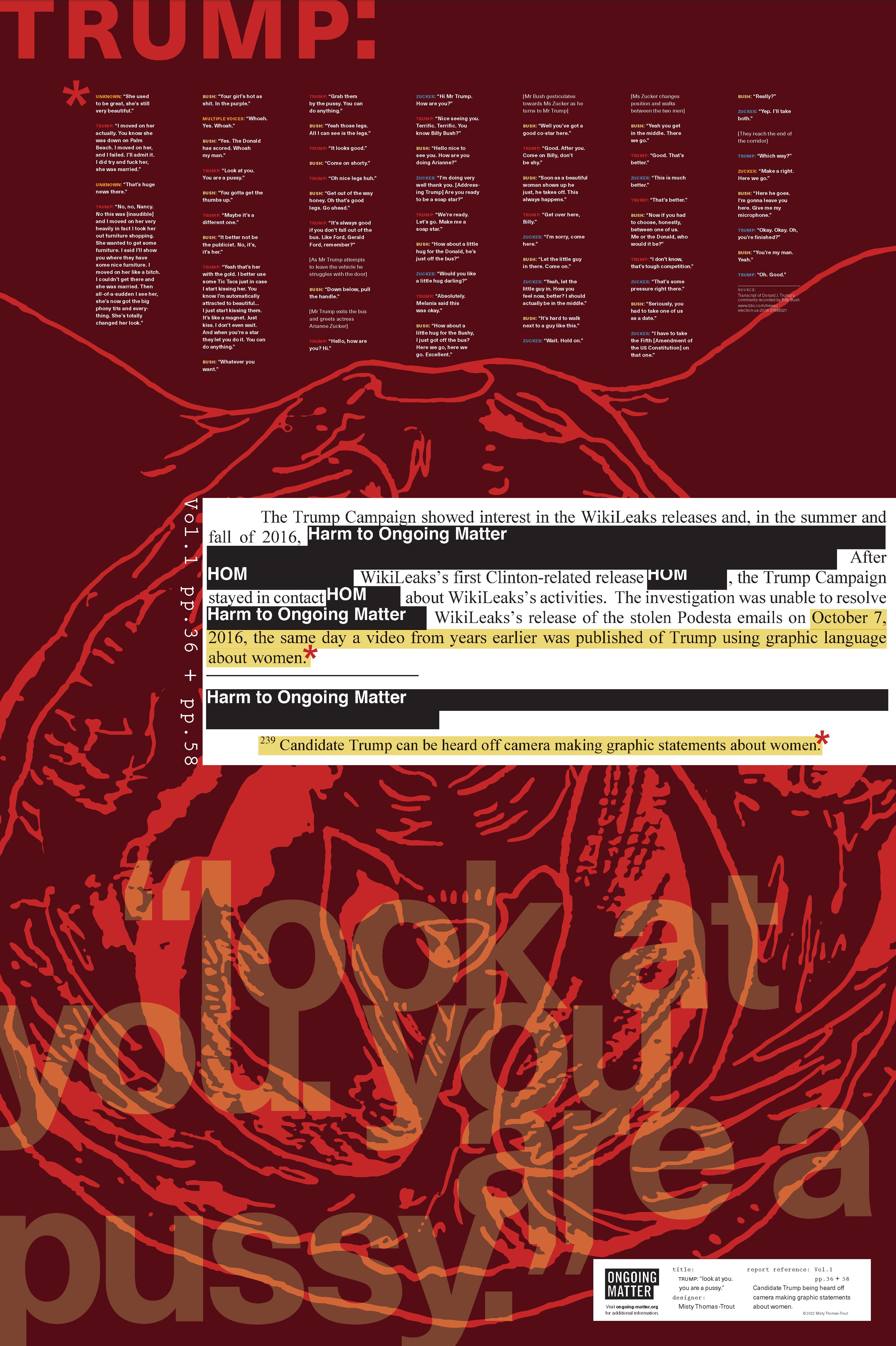 Client
The United States of America

Client
The United States of America

This 24 x 36 inch digitally printed poster was designed for "Ongoing Matter", a multi-platform, traveling collection of poster designs that mobilizes political engagement. This exhibition seeks to encourage engagement with the Report On The Investigation Into Russian Interference In The 2016 Presidential Election, or, as it is more colloquially known, the Mueller Report.

The Mueller Report is a public government document that is full of confusion and becomes inaccessible. Throughout its 448 pages, citizens can visually see how the "government" can hide its truths. Furthermore, it is a document centered around "men." The word "woman" appears 11 times and each instance is tied to a Russian woman and/or a sex scandal. "Women" appears 7 times in the context of Trump using graphic terms and language about women and paying to silence women who had affairs with Trump. (Mueller Report Pages: 72, 84, 121, 136, 143, 144, 145, 148).

The ideas within this poster critique America's foundational roots in patriarchy. The design visualizes the graphic language against women used by Trump in the Mueller Report and throughout the conversation he had with Billy Bush during his candidacy (Link to Source on My Website). It is a vulgar display of Trump's misogyny. Several concepts are at play within this piece, such as, the overturn of Roe vs. Wade (Friday, June 24, 2022) and women's reproductive rights taken back. It is a harsh view of America's patriarch perpetuated by the acceptance and allowance for a misogynist president and continued degradation of women.

The anatomical digital illustration of the Levator Ani Muscle of a female (the largest component of the pelvic floor) is the largest element on the page. Abstracting this body part from its realistic image, disables the viewer from seeing this image as a sexualized object. Instead, it becomes dominant as an obscure image that symbolizes the power of women and what our bodies are capable of doing. The title itself is a double entendre. It is verbatim from the mouth of Trump and meant to be read out of context so the thinks that Trump is being called a "pussy"—blurring the lines between "free speech" and "hate speech."

"Ongoing Matter" is a non-partisan traveling poster exhibition that critiques the inaccessibility of government documents. Each poster intends to inspire and empower citizens as it promotes awareness around political issues that threaten democracy.