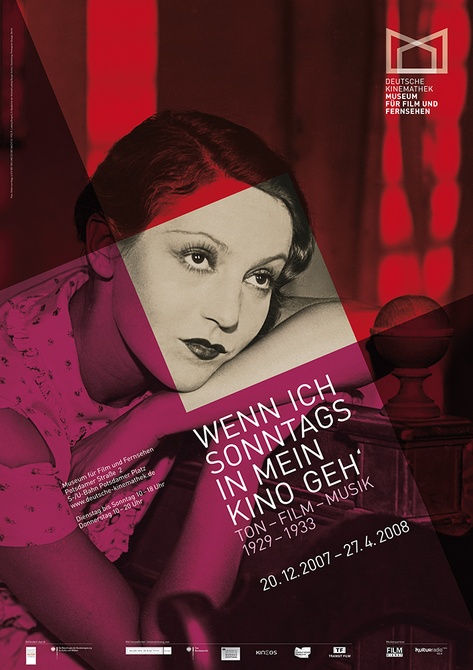 This is a series of 5 exhibition posters designed for the Deutsche Kinemathek — Museum für Film und Fernsehen (German Museum of Film and Television) in Berlin. Located at the Potsdamer Platz, in the heart of the city, the museum celebrates Germany’s contribution to world cinema and is comparable to institutions like the British Film Institute in London and the Cinémathèque Française in Paris. Holdings from Marlene Dietrich’s estate form the core of the permanent collection. The museum was formerly named the Filmmuseum Berlin, but relaunched recently with a parallel focus on television. It needed an identity that would reflect both media, and the new logo, designed by Pentagram, features two screens intersecting to form a silvery-grey letter “M. The design of the posters therefore pursues the identity by using diagonals as main design elements.
Posters: 1. Poster for the museum’s 2008 homage to the Italian filmmaker Francesco Rosi.
2. Poster for the film series In the talkies every Sunday night:
Sound-Film-Music, 1929-1933.
3. Luis Buñuel retrospective poster.
4.100 years German film history
5. Ulrike Ottinger exhibition poster