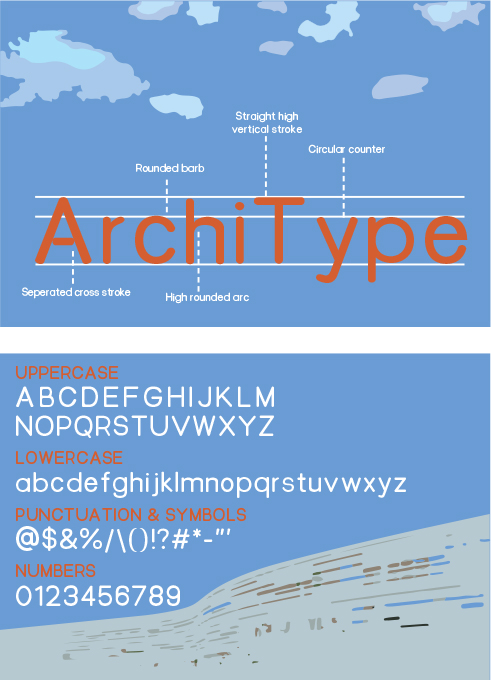 Design an original typeface inspired by a Newhouse professor.

As the top administrator at Newhouse, Susan Nash manages both people and complex schoolwide projects. More than a decade ago, for example, Ms. Nash was in charge of the construction of Newhouse III and, later, the renovation of Newhouse II, including the television studios. With a clear blueprint in her mind while working on the projects, she says she knew exactly what the buildings could become. Instead of focusing on details, though, Ms. Nash says she enjoyed working on the big picture. To show her enthusiasm for these formative and defining Newhouse projects, ArchiType has an upright architectural structure with a tall x-height and supporting arches. In addition to physical plant needs, Ms. Nash also tends to staff personnel matters, including hiring, performance evaluations and human resources. Her nurturing and protective way with the staff is reflected in ArchiType’s generous curves and rounded terminals.

While designing ArchiType, I have learned typographic terminology and explored the beauty behind a variety of typefaces. Changing a stroke width or rounding its terminals can dramatically change the personality of a letter, and these types of details are what give each typeface its distinct identity. Before this project, I had never paid much attention to the design behind any typeface, but thanks to this unique experience, I now dream in glyphs.