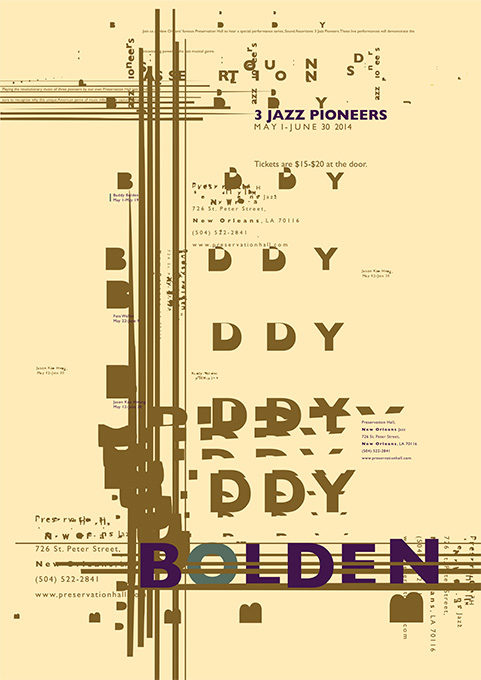 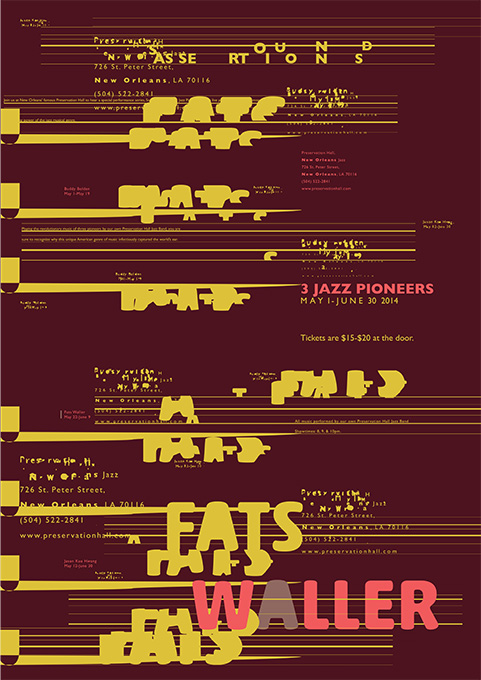 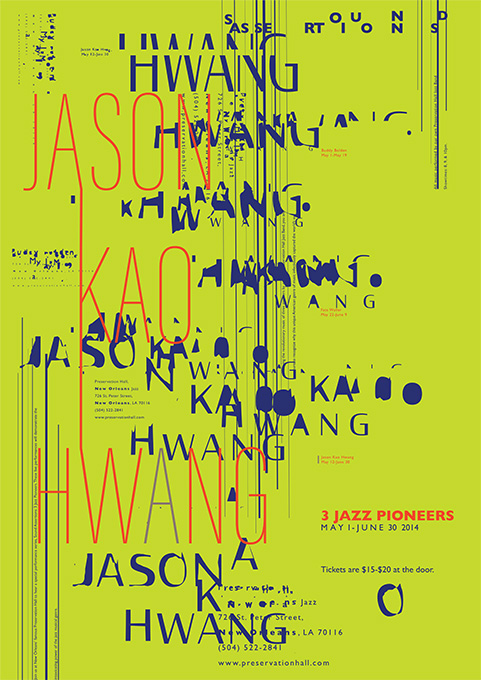 For each poster, I incorporated a fragmented element of the artist’s name. I chose to do this because I think this fragmentation is a great visual representation of rhythms/beats without having literal pictures of music notes or instruments. Each poster also has a line element used to say something about the music and loosely allude to each musician's instrument. Bolden’s music has a constant beat with a playful melody overtop, so I used the fragmented type of his name to represent the beat and the additional type around his name to show the overlapping melody. His lines are both horizontal and vertical to show the music's moving directions and represent the horizontal/vertical nature of a trumpet. The color palette has many golds to suggest that it is old/ classic like a sepia image; the green and purple spice colors compliment it while nodding to the traditional colors of Mardi Gras in New Orleans (where Bolden is from). Waller’s music has similar elements with a consistent beat and strong melody overtop. However, it is much smoother and more charming than Bolden’s music. The horizontal line elements allude to piano keys while forcing the viewers' eyes to move in a subtle wave across the page. That smooth transition is similar to Waller’s music. I decided to make the background color on his poster dark with bright text overtop to give off a nightclub feel. Kao Hwang’s music is jarring and eerie. The line elements on his poster are all vertical, like the strings on a violin. They also give a visual representation to the sound of Kao Hang, slowly dragging out the notes in his songs. I chose bold/striking colors for his poster because they almost seem like they wouldn’t all work together at first, but it comes together in the end, much like Kao Hwang’s music.

While making my posters, I was greatly influenced by the sounds and rhythms of each artist. It was my goal to convey the unique tempos and beats of their music. Buddy Bolden’s music aligns with the upbeat playfulness of ragtime music. Additionally, there’s a “highly syncopated treble lead over a rhythmically steady bass.” Waller’s music is more charming in a smooth way that reflects the nightclub scene of the 30s. A lot of his lyrics are quite cheeky as well with lines such as, “Your kisses are worth waiting for believe me.” The Harlem stride style of music Waller played formed from Bolden’s ragtime music, with “the right hand [playing] the melody while the left-hand plays a single bass note or octave on the strong beat and a chord on the weak beat.” Lastly, Jason Kao Hwang’s music comes after both of the aforementioned jazz pioneers. His music is unconventional and improvisational, which creates a series of sounds with his violin's long notes. Something about his music is off-putting in a way that comes together in the end.