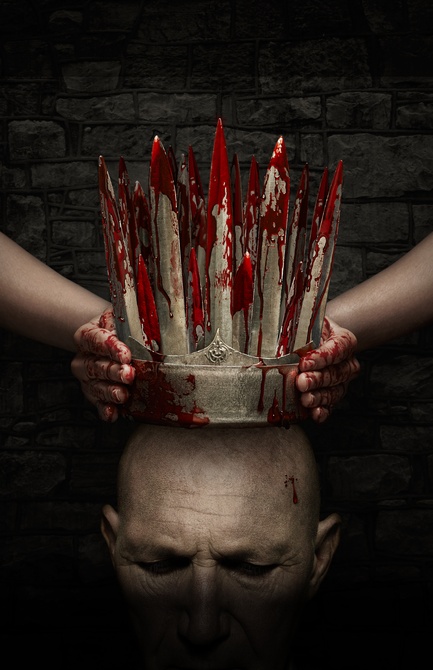 The creative team welcomed the opportunity to create a poster for the Saratoga Shakespeare Company’s 2014 summer production of Macbeth. No doubt one of Shakespeare’s darkest and most tragic works, Macbeth delves into the perils of unbridled ambition and the complexities of human nature. For the poster, the creative team focused on two dominant symbols from the play: blood and a crown.

The team wanted to create a provocative, menacing mood to conjure the true spirit of Macbeth. To achieve this, the team photographed a set of blood-soaked daggers and custom-forged them into a king’s crown. In the poster’s image, the bloody crown leaves stains on Lady Macbeth’s hands as she places it atop her husband’s head. (Who could forget Lady Macbeth’s descent into madness and her immortal words: “Out, damned spot, I say!”) The bloody crown also drips on Macbeth’s head – a smear on his conscience. The symbolism is multidimensional, conveying both Macbeth’s murderous rise to the throne at the taunting of his power-hungry wife, as well as their eventual guilt that cannot be washed away. Macbeth announces that “blood will beget blood,” and his image of wading in a river of blood sums up one of the biggest themes in Macbeth: once you’ve gone far enough in spilling blood, there’s nothing you can do to stop it.