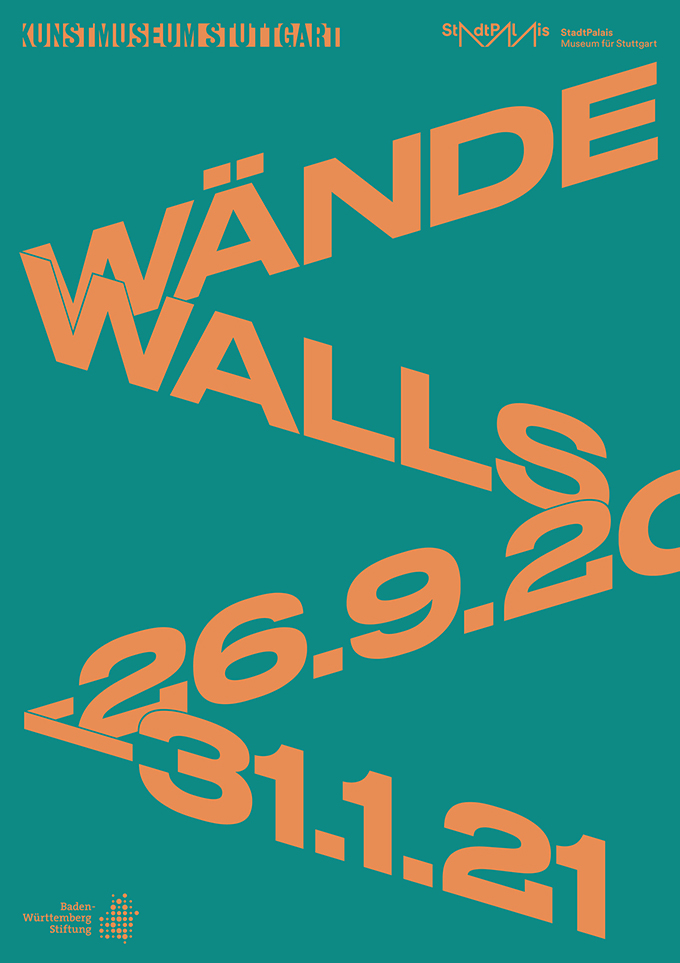 Poster for the exhibition Wände | Walls at the Kunstmuseum Stuttgart.
Many artists have dealt with the theme of the wall and walls. Be it in the form of white space or also in a sociological context, such as family, enclosure, exclusion.
The typography advertises on the one hand with the exhibition title, on the other hand with the direct macrotypographic form of the wall itself and thus becomes an exhibition space itself.

The poster advertises the exhibition in the urban space in Stuttgart.

"If only these walls could talk" – in the spirit of this saying, the exhibition traces the artistic exploration of the spatial boundary of the wall. On display are 30 international positions from 1966 to 2020, in which walls are thematized in different ways.

In their works, artists such as Monica Bonvicini and Yoko Ono highlight the most decisive function of walls – that of inclusion and exclusion. On the one hand, walls stand for the protection of the individual; on the other, they can imprison and deny access. As a space-forming architectural element, they help determine our living spaces and are involved in identity-forming processes. Artists such as Ernst Caramelle and Bruce Nauman make this clear by understanding the wall as a reacting counterpart or by attributing human features to it. Works by Jeewi Lee and Sol LeWitt, among others, address the white cube as a common form of presentation of contemporary art. They demonstrate how the white walls of the exhibition space influence the effect and perception of works of art.

While wall works are realized indoors in the Kunstmuseum, another focus is on graffiti art and thus on an art form that is primarily concerned with the design of walls in outdoor spaces. In the StadtPalais – Museum für Stuttgart, the current sprayer scene as well as the graffiti history of the past years and decades in the Stuttgart cauldron will be shown with a view to some relevant spots.