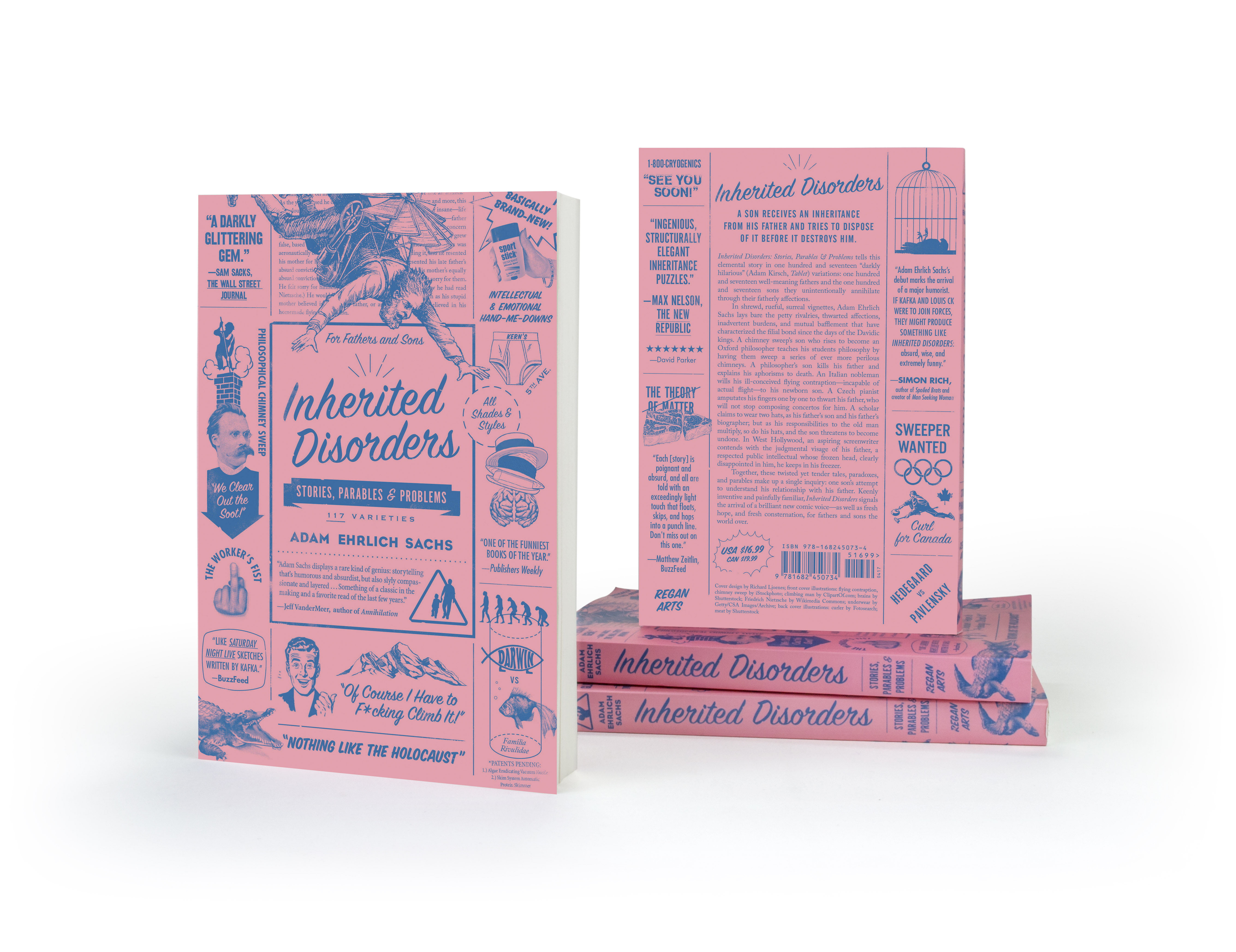 Design cover for Adam Ehrlich Sachs’s “Inherited Disorders” (paperback version. Hardcover was previously released with a different design). This collection of short stories is a rueful, absurd, and endlessly entertaining look at a most serious subject—the eternally vexed relations between fathers and sons. In a hundred and seventeen shrewd, surreal vignettes, Sachs lays bare the petty rivalries, thwarted affection, and mutual bafflement that have characterized the filial bond since the days of Davidic kings. A philosopher’s son kills his father and explains his aphorisms to death. A father bequeaths to his son his jacket, deodorant, and political beliefs. England’s most famous medium becomes possessed by the spirit of his skeptical father—who questions, in front of the nation, his son’s choice of career. A Czech pianist amputates his fingers one by one to thwart his father, who will not stop composing concertos for him. A nineteenth-century Italian nobleman wills his ill-conceived flying contraption—incapable of actual flight—to his newborn son. In West Hollywood, an aspiring screenwriter must contend with the judgmental visage of his father, a respected public intellectual whose frozen head, clearly disappointed in him, he keeps in his freezer. Keenly inventive, but painfully familiar, these surprisingly tender stories signal the arrival of a brilliant new comic voice—and fresh hope for fathers and sons the world over.

Vintage classified ads were used as the backdrop to play with themes from the book. Quotes from actual book reviews are incorporated among many of the surreal chapter headlines and excerpts from the book. The biggest visual of the falling man with the flying contraption was reused from the main illustration of the hardcover to keep a link to the first release of the material. The palette was kept in a simple vintage 2-color, but with some pop, while the overall design was slightly distressed to add some wear and tear.

Evidence of how the idea was received by the target audience e.g. number of views, increase in visitors.
The book has done well both commercially and critically, garnering great reviews The New Yorker, Boston Globe, Wall Street Journal, The New Republic, Buzzfeed, and Publishers Weekly. To date we have already sold well over 50% our 1st printing, and the book continues to sell. The book has also performed exceptionally well digitally selling the equivalent of 70% of the print-run in electronic versions.