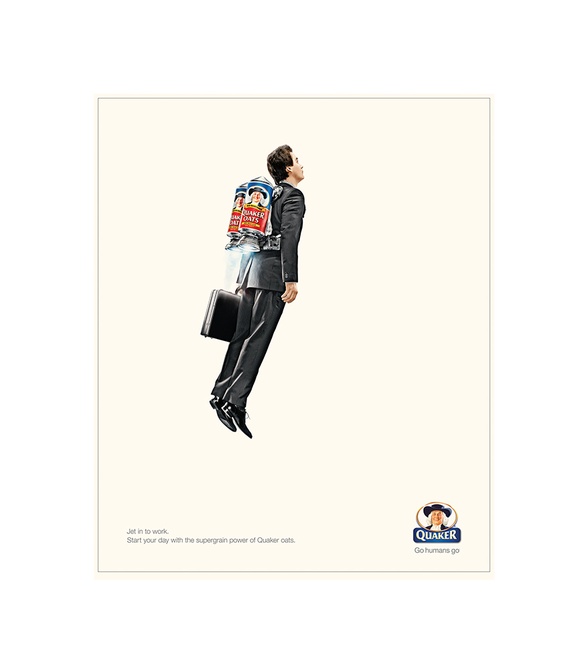 ASSIGNMENT
For as long as most people can remember, Quaker has been touting the cholesterol-fighting benefits of oats. While this is certainly an important message, Quaker felt it was getting a bit dated. To counter this, we created simple telegraphic images that used metaphors of power and energy to convey the positive effects of having a healthy Quaker breakfast. We paired this with the tag “Go humans go” — a declaration of encouragement during one of the most difficult eco- nomic times in history.
APPROACH
Go humans go. This was more than a tagline. It was a rallying cry intended to speak to people on a level deeper than what a consumable product could typically satisfy. We wanted to move the brand out of their packaged goods comfort zone and engage their core audience in a way they had never done before. And, of course, win over new customers. We set out to make it a socially relevant brand—to dimensionalize the iconic Quaker Man in a way that excited consumers.
THE BIG IDEA
Our ultimate solution was simple, actually. All print, OOH and TV executions dramatized the positive energy of Quaker Oats. It’s clean fuel. We built a campaign out of visual metaphors for clean energy, like the coiled spring ad you see here.
RESULTS
Because the campaign was so visually arresting, the OOH (similar executions as the print) worked very hard for the campaign. In the regional markets where we ran the full OOH plan on top of the national TV and print, sales lifted by 5%. The campaign was also a success in the sense that Quaker became a point of chatter all over the world. Message boards and social media sites buzzed about the sometimes mysterious, sometimes cute, yet always playful images. Go humans go became a target of parody both online and via street artists — always a sign of pop culture ubiquity.