All The Pieces Matter 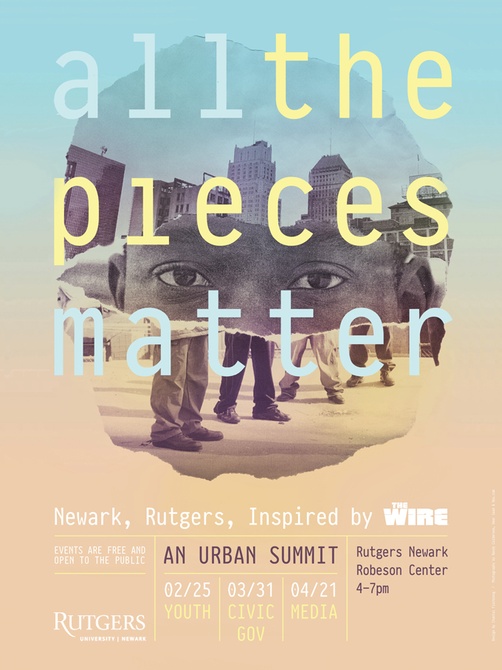 Photographer
Randy Calderone
Omar Saad
HBO, The Wire Episode "That's Got His Own"

Photographer
Randy Calderone
Omar Saad
HBO, The Wire Episode "That's Got His Own"

During the Fall of 2013, as a collaboration at Rutgers University - Newark, English professor Fran Bartkowski and the Dean of Sociology & Anthropology Sherri-Ann Butterfield, taught a 100-student course on "The Wire;" HBO’s television series set in Baltimore with a focus on urban America at the turn of the 21st century.

Together with Tim Raphaelle from "The Center for Migration and the Global City," and Roland Anglin from "The Cornwall Center for Metropolitan Studies," they organized a series of public talks for the spring of 2014. This “urban summit,” as they call it, is meant to explore how the issues of criminal justice, city government, education and mass media, all raised in "The Wire" and discussed in class, bear mission to the role of the people of Rutgers in relation to the city of Newark, where they are situated.

Assignment (the project and its goals)

In support of the school's vision to integrate the campus with the city, scholarship and service, and bring together the various communities that share a stake in Newark’s future, this poster invites students, faculty and member of the community, to participate in this series of talks scheduled to focus on one central event each month for 3 months: Youth on February, City Government on Match & Media on April.

Through collage technique, I assembled photographs representing the 3 constituents that brought this event to life (Newark, Rutgers & The Wire) into an abstract spheral whole in order to form completeness from a sum of all parts. To translate this unity into the type treatment, I maintained uniformity in weight, spacing and placement, creating a perfect block while making use of color to highlight individuality of "all the pieces" that "matter" most within a unified system.