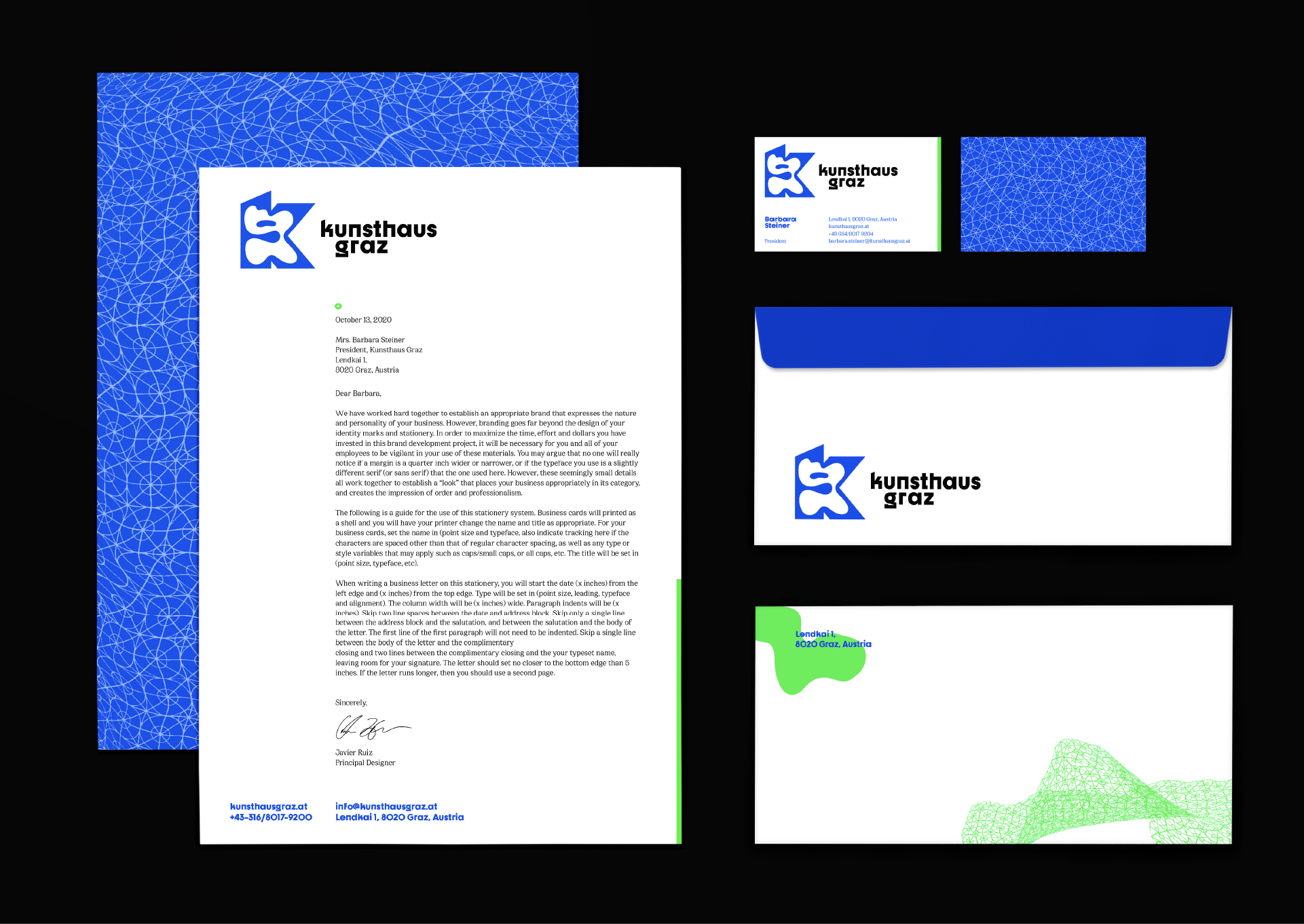 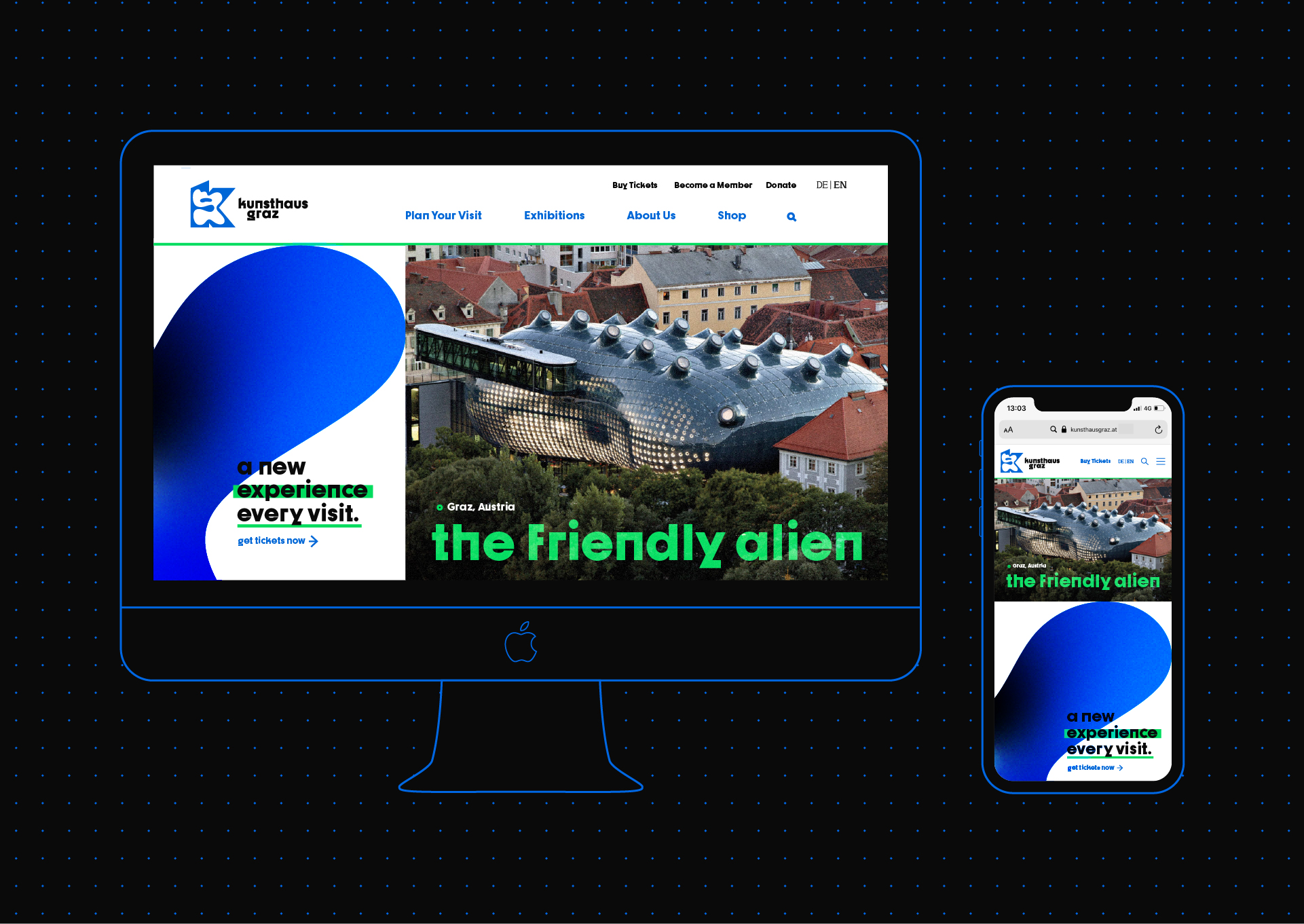 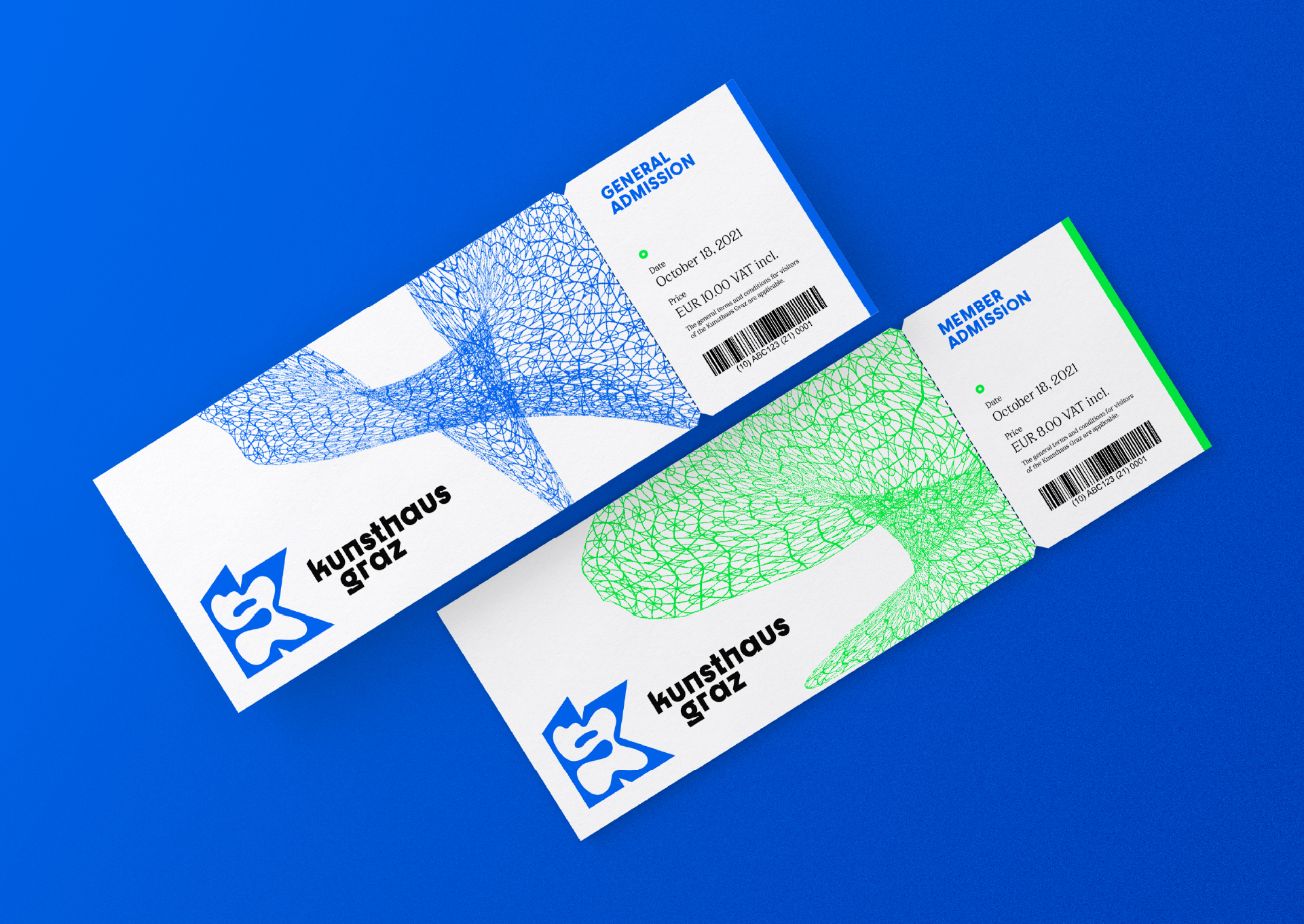 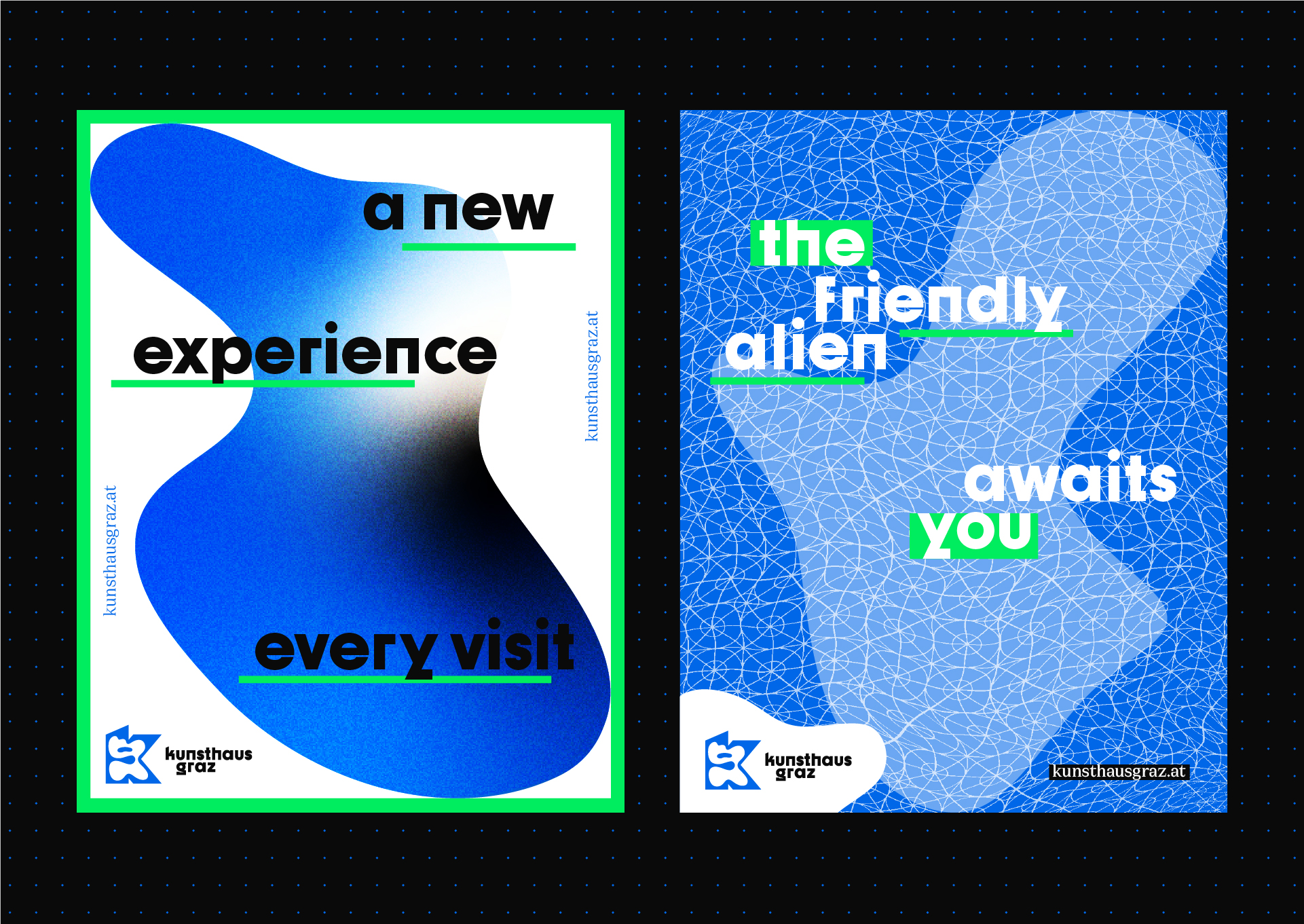 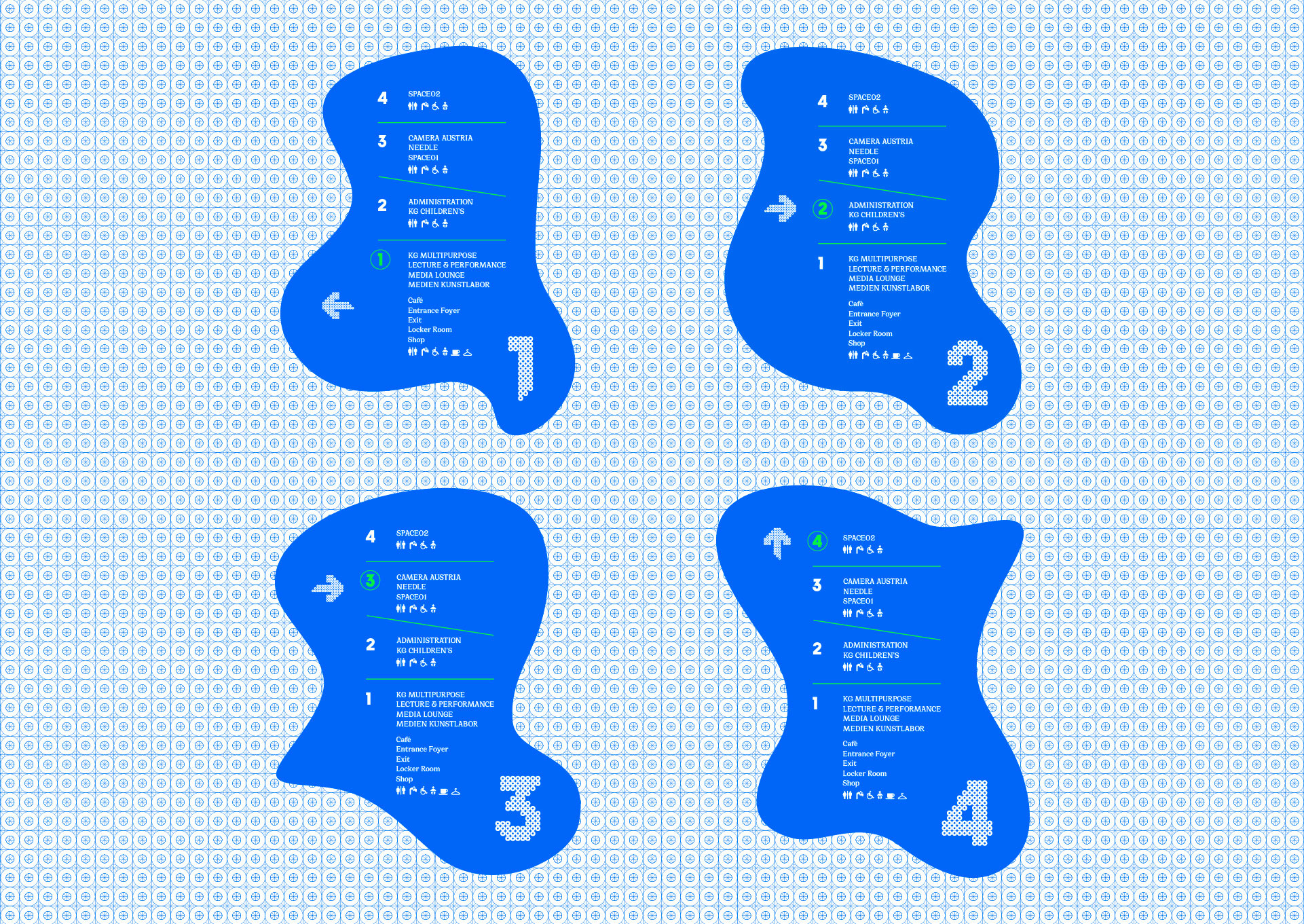 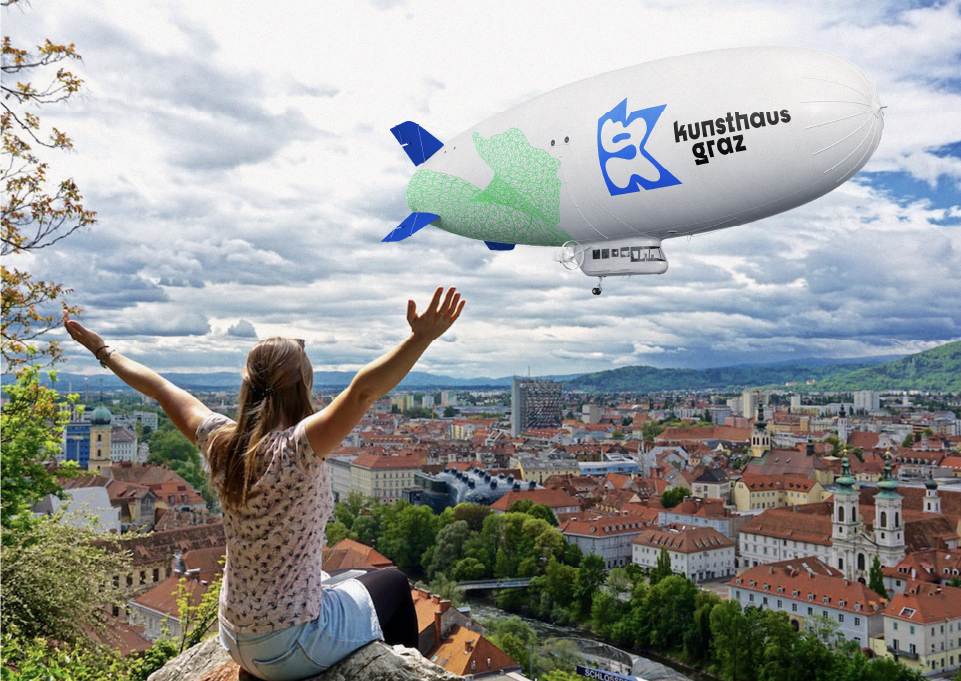 The Kunsthaus Graz is an exhibition centre in Graz, Austria, that combines international contemporary art with regional and local themes and objectives. Its exhibition program is particularly different given that it doesn’t hold a permanent collection, making every time you visit a new experience. The challenge was to build a brand identity that not only relies on the architecture of this building but also features the unexpected nature of what’s inside the museum every time you visit. In other words the dichotomy between the outside and the inside. This was the driving force behind the repositioning of their new brand identity.

French philosopher Jean Baudrillard coined the term “monstrous architectural object,” an object that is in complete contradiction with its context, standing out like an apparition from outer space. The invention of such monsters creates a cultural void, allowing something new to emerge and take shape. The Kunsthaus Graz is a perfect example of “ the monstrous architectural object.” Its blobby futuristic organic shape juxtaposes the structured historic geometric shapes of the buildings around it. The building has come to be known as the "Friendly Alien.”

The logo was created as a typographical representation of the building tightly positioned in the middle of this city. The sophisticated yet exciting color palette, shows a modern flare that’s applied throughout the brand extensions. The varying graphic elements like blobs, pattern, and intricate mesh forms are used to create intriguing ways to engage the viewer.

The new website features a modern feel with a simplified navigation, unifying graphic elements, and a strong brand identity that allows the user to get a glimpse of who Kunsthaus Graz is.

The innovative outer skin of the Kunsthaus allows the friendly alien to communicate with the city, with a skin made of iridescent blue acrylic panels, which can be used as a large screen for films and animations. So it was crucial to look for other opportunities to strengthen this communication. The interaction between the city and the museum became a priority in growing the outreach strategy.

The museum’s design sought to be deliberately provocative and innovative by offering a less "institutional" approach to organizing exhibition spaces and employs new materials and manufacturing techniques. The wayfinding system was designed under the same parameters, breaking away from the conventional rectangular shaped signs. Instead the system allows for a fun variety of blobby shapes with a clear hierarchy of information and directional elements.

With this rebranding campaign the Kunsthaus Graz solidified their brand identity in and out of their building. It created a clear visual identity that can be applied to any media from print materials to digital formats. The flexibility of opportunities within the brand applications is a proof of Kunsthaus Graz's ongoing mission of providing their visitor with an unexpected and changing experience. This positioned Kunsthaus Graz in the global map, as a destination for travel and as a pioneer institution for contemporary art.