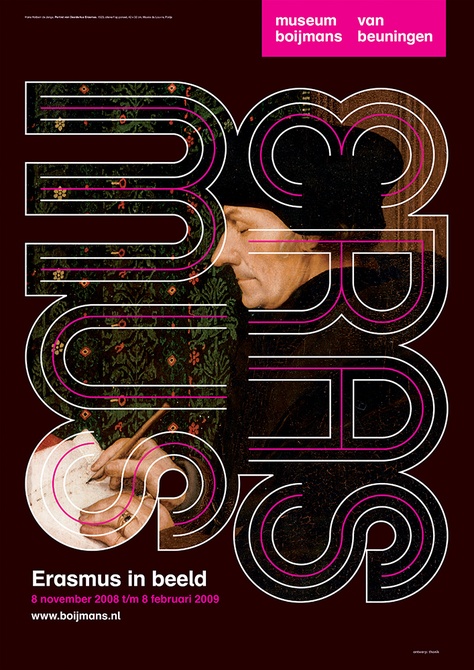 Identity for Museum Boijmans Van Beuningen in Rotterdam. This museum houses a collection of approximately 125,000 objects including works of old masters, modern and contemporary art and design and decorative arts. The new director Sjarel Ex wishes both to strengthen the museum’s links with the city of Rotterdam and increase the museum’s national and international standing. Thonik applied three processes that are at the basis of the house style for Museum Boijmans Van Beuningen. In the first place Thonik realised a shift from reduction towards complexity in the graphic variables and their rules of application. The second process involves the construction of the typeface from lines of various colours. The third process concerns the relationship between the museum’s logo and the typography for its exhibitions and activities. The museum’s name has been reduced to a simple, stable and modest logotype while the typography for the posters and invitations is the bearer of the museum’s identity. The museum’s identity has shifted from the name of the sender towards the form and content of its activities. Museum Boijmans Van Beuningen’s house style applies a marketing technique—branding—but the way it is implemented within a flexible typographic system contrasts strongly with the formal language that prevails in commercial branding. In its innovative and experimental character, the graphic system developed by Thonik connects with the productions branded by it: art in the broad sense of the word. The house style is applied consistently across all the museum’s means of communications: on exhibition announcements, in the museum’s wayfinding system, in merchandising, advertising and on the website. The new house style for Museum Boijmans Van Beuningen fits the museum self image and its ambition as a ‘performing institute’: its identity is formed by the totality of its achievements.