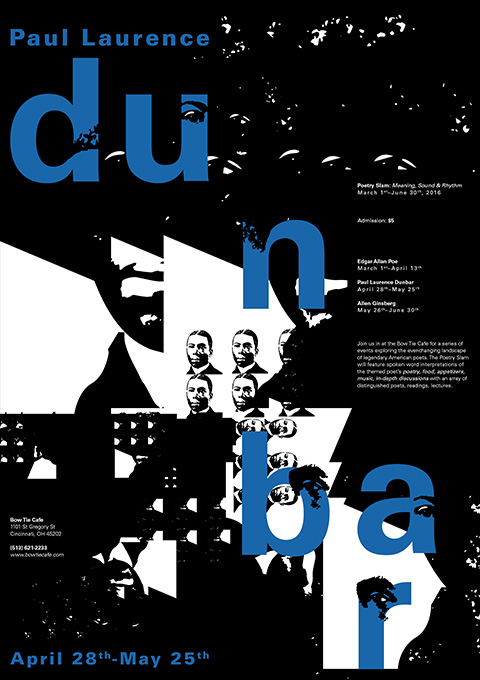 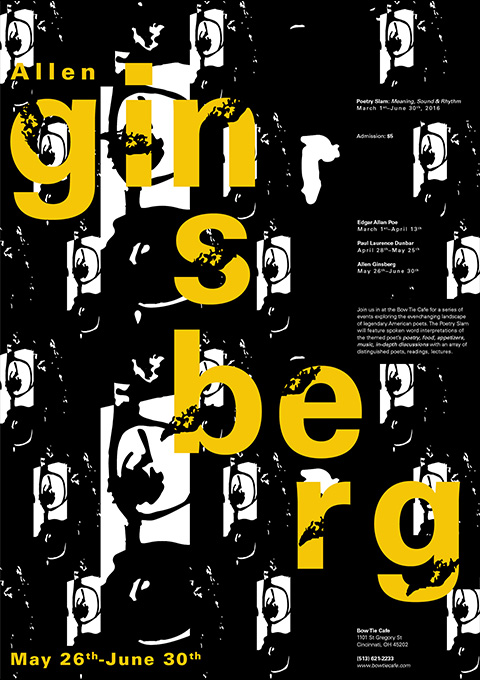 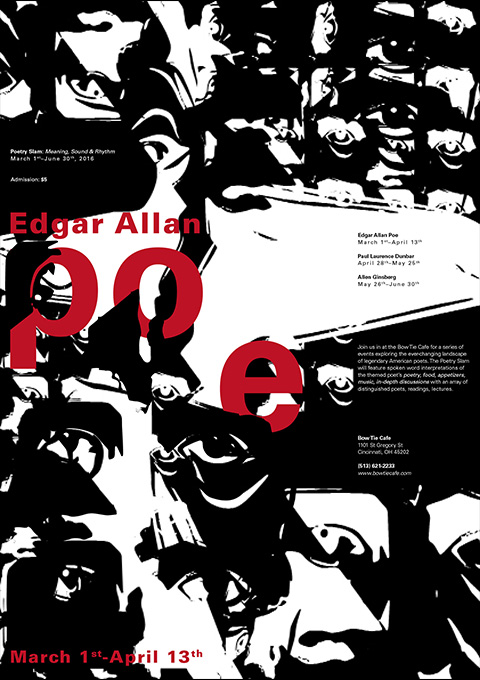 This project focuses on the manipulation and arrangement (composition) of typography and image as it conveys messages through a poster series. I developed three poster that persuade viewers to attend a poetry slam at a local coffee shop in the Cincinnati, Ohio area. The series features three poets: Paul Laurence Dunbar, Allen Ginsberg, and Edgar Allan Poe. My poster series communicates the concept that each of these poets dealt with mental illness over their lifetime. The mental quirks the poets had were the following: Dunbar had depression, Ginsberg was clinically insane, and Poe was depressed and broken hearted.

Within the Dunbar composition, the viewer can see a deeper meaning through eyes overlapping the letter forms. This deeper meaning alludes to Dunbar's poem "We Wear the Mask". In this poem Dunbar speaks on how he must "wear a mask" instead of showing his true identity due to his ethnic background. In Poe's composition, one can see that Poe's face in shifted at an angle. This angle represents the broken heart that poe had. Poe's broken heart can be seen in much of his writing especially in his poem "The Raven". In Ginsberg's composition, an organic texture overlaps the letterforms in the name "Ginsberg". This alludes to how Ginsberg compares the natural world to America's political turmoil during his lifetime. This is especially evident in collection of poetry "The Fall of America: Poems of These States". The composition also has a series of his eyes are repeated to make up the poster's imagery. There are three vertical columns of eyes that make the larger eye image look as if it is behind bars. This alludes to Ginsberg's cynicism about America, and how he warns people in his poetry that they need to be freed from the American government.

Through a long process of typographic play I settled on the idea of layering each of the poets faces to create a patterned image. I used a different grid for each poster I created. I then incorporated text on top of the image using a separate grid. Finally, I fused the poet's name and image within each poster, by overlaying parts of the image over the type.

I this method because I thought it actively portrayed the theme of mental illness, while also allowing me to allude to deeper parts of each poet.

The final results were three visually intriguing posters that easily portrayed the idea of mental illness as a series.