The Ringmaster Thinks the Bible Will Save Him in November 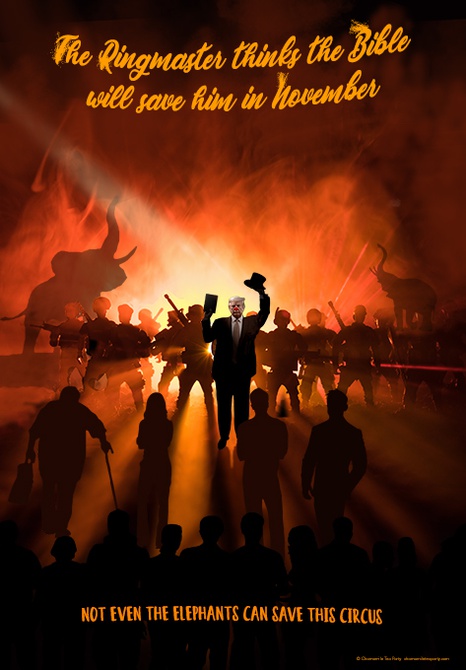 As a designer, I am interested in the intersection of art and American culture. For the last 11 years, I have been creating posters about the sorry state of American political discourse under the guise of the Chamomile Tea Party. During this decade, I have designed over 200 posters documenting our political process from the advent of the Tea Party in 2009 to the present, including the 2020 presidential election and the confluence of politics, the pandemic, social justice issues, and economic inequality. Public engagement is an essential aspect of my work. Just before the 2012 presidential election, I was the first artist to buy ad space in Washington, DC's Metro, placing my posters about the effects of legislative gridlock on platform signs. In 2018, Google Arts & Culture published a seven-part online exhibition of this work, allowing me to create a visual history of American politics. I am completing an eighth chapter that will bring us up to the present.

This poster was a reaction to President Trump's photo op in front of St. John's Episcopal Church on June 1, 2020. He wanted to show his ability to be seen as the country's law and order president. But it went wrong in several ways, and I wanted to create a visual comment that encompassed the events of that evening and its ramifications. Peaceful protesters were pepper-sprayed and shot with rubber bullets to clear Lafayette Park directly in front of the White House. Trump insisted the government take back control of the streets and was willing to use military force to do so. And yet, his failure to convey that strength as he held up that Bible was both mesmerizing and terrifying. How could someone so miscalculate those visuals, especially someone who orchestrated his image so tightly?

As I thought more about his role as president and his sense of himself, he acted more like the ringmaster in a traveling circus. Yet, instead of being surrounded by clowns and tigers, the National Guard encircled him. It was a performance but one devoid of fortitude. So, I created a space that conveyed this role. Citizens were watching with a few brave souls moving towards him. I used the image of him holding up the Bible but also raised his other arm to hold a top hat, a ringmaster's hat welcoming us to his vision of "the greatest show on Earth."

The title, "The Ringmaster Thinks the Bible Will Save Him in November," conveys both his belief that pandering to his evangelical base would get him re-elected and make him feel secure. It presented the irony of a man who cultivates the support of religious followers despite his disdain for their beliefs.

The bottom text reflects my opinion of the whole tableau: "Not Even the Elephants Can Save This Circus." It tied the circus theme to Trump's GOP sycophants, who were the ones most responsible for ignoring their Constitutional duties and allowing Donald Trump to continue to act so irresponsibly.

To measure the impact of this image, I must look at this project as a whole rather than the effects of just one poster. To distribute them, I offer these high-resolution images for free under a Creative Commons copyright. People have printed and used them in rallies across the country. When I placed them in DC's subway, I often engaged commuters about the issues these posters conveyed. The Google Arts & Culture project was the first time Google published current political art on this platform, and it has brought the work to a global audience. Each chapter reads like a visual history book of these extraordinary times in American history and will hopefully serve as a document of this period. At its heart, that is what the Chamomile Tea Party posters are about: promoting discussions about the critical issues that face us.