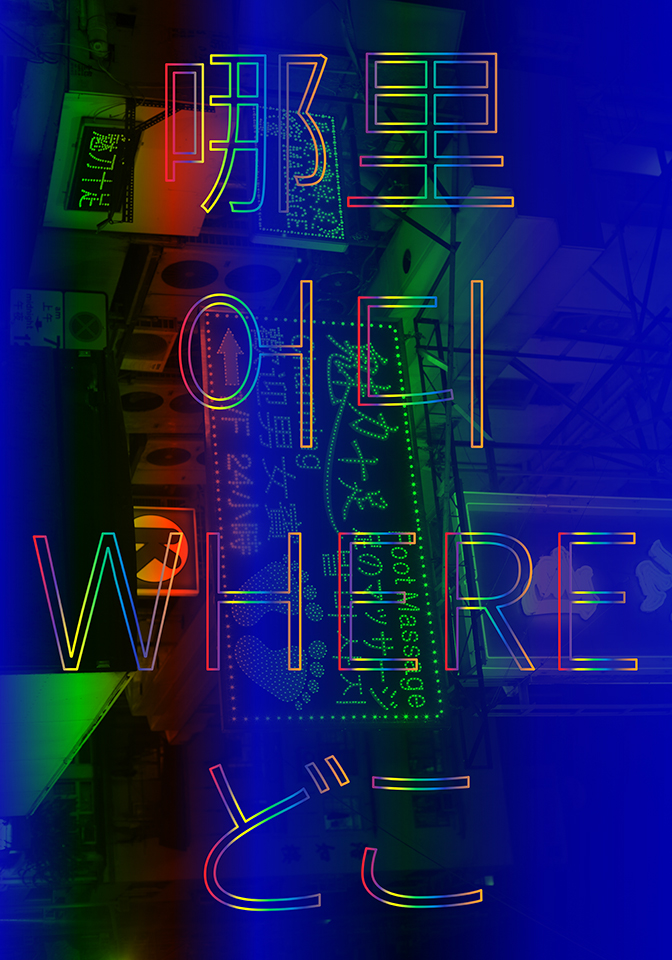 This poster was designed when we were invited as designers to International Poster Invitation Exhibition in Beijing Design Week 2015, held under the theme City.

Where: Multilingual - There are many ways to analyze and define the space City. In this work, we wanted to talk about the Metropolitan City which consists of multilingual signs. The photograph in this poster was taken in July 2015 when Daeki Shim had visited Hong Kong. Daeki Shim took this photo when he was walking along the night street of Kowloon area in Hong Kong. This neon sign, which is consisted of English, Korean, Chinese, and Japanese, shows what a Metropolitan City is like. The beautiful sign I had found coincidentally is probably for tourists.

These multilingual signs can be easily found not only in Hong Kong, but also New York, London, Beijing, Tokyo, Seoul, or in another word, every“where”. This “where” means “city” and the commercial multilingual typography of the streets is a symbolic visual language that represents a part of the city’s sight. As main typographies in this poster, we used the word “where” with four different languages which are English, Chinese, Japanese and Korean.

Please also see the following link which is a visual concept of this poster.
https://goo.gl/l9e4TY

This poster was exhibited in International Poster Invitation Exhibition in Beijing Design Week, held under the theme City in 2015.