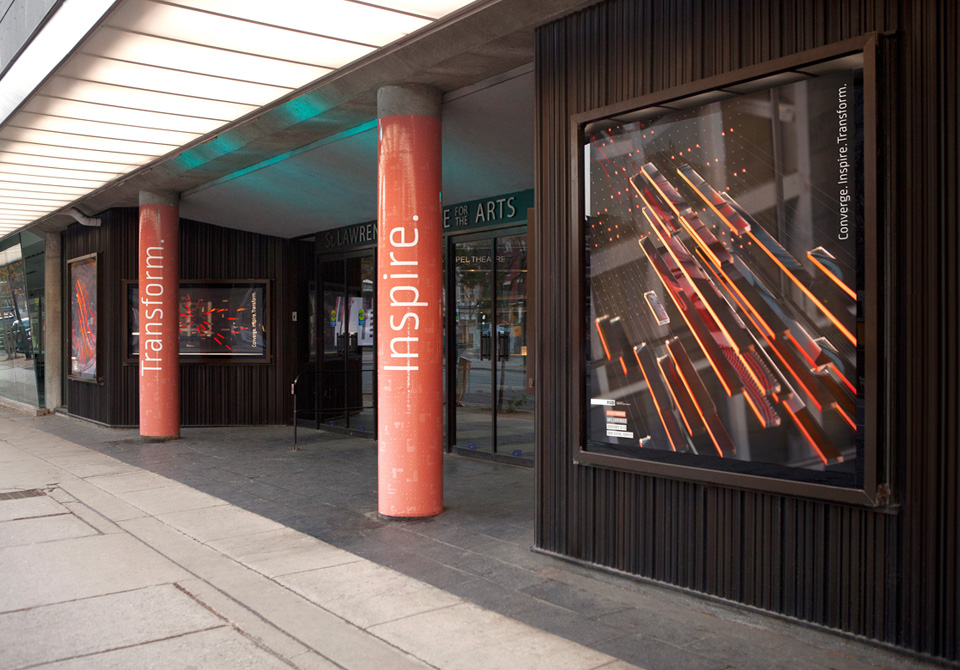 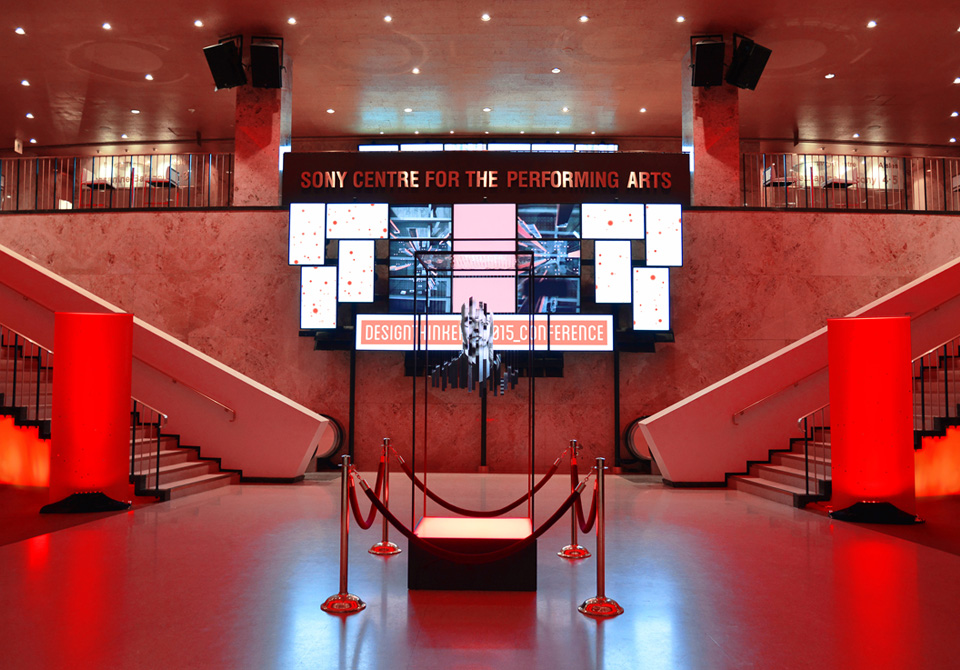 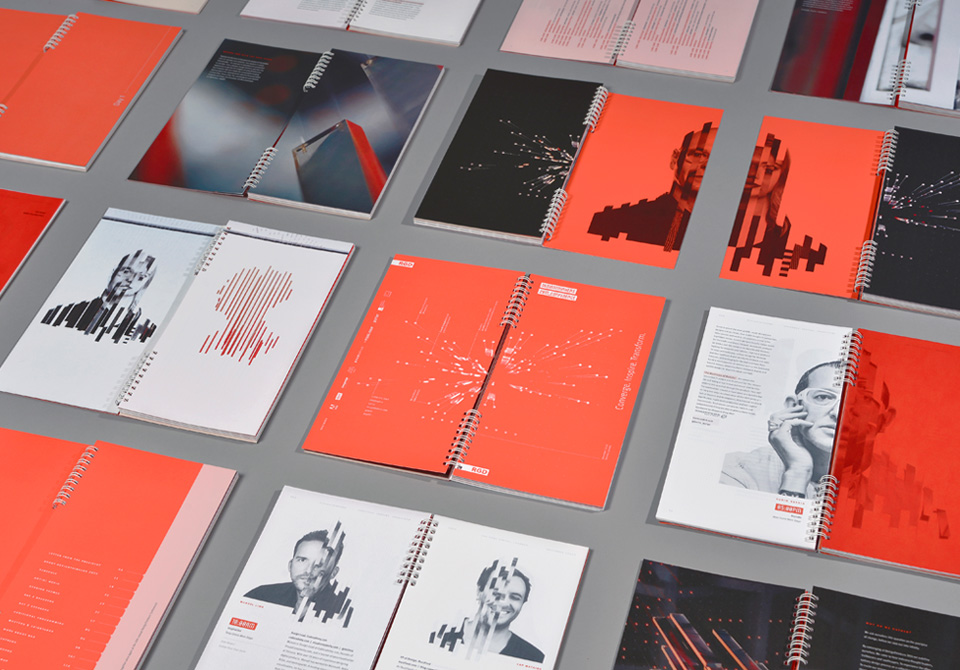 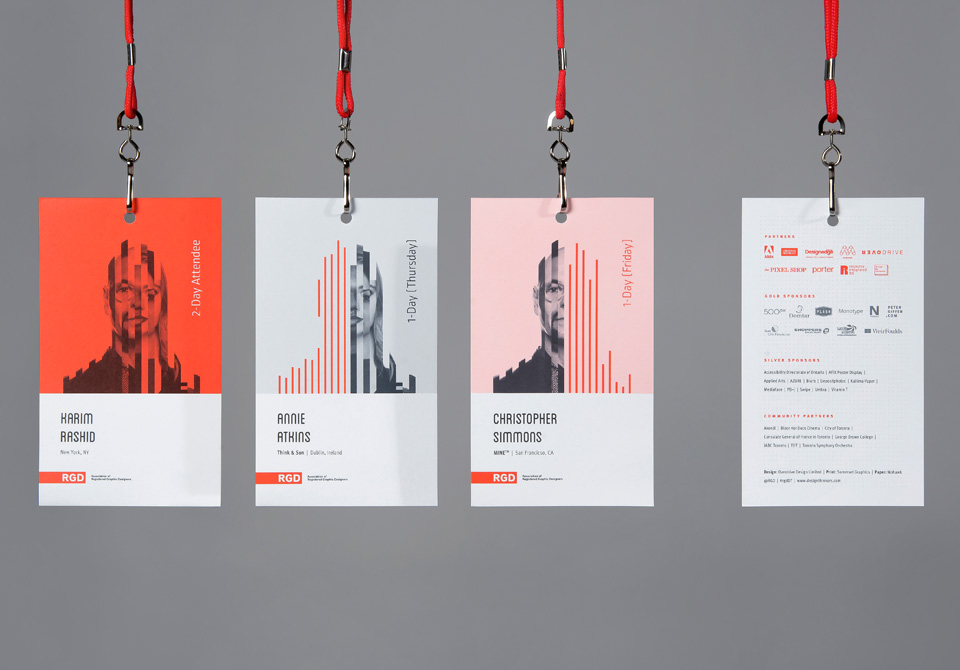 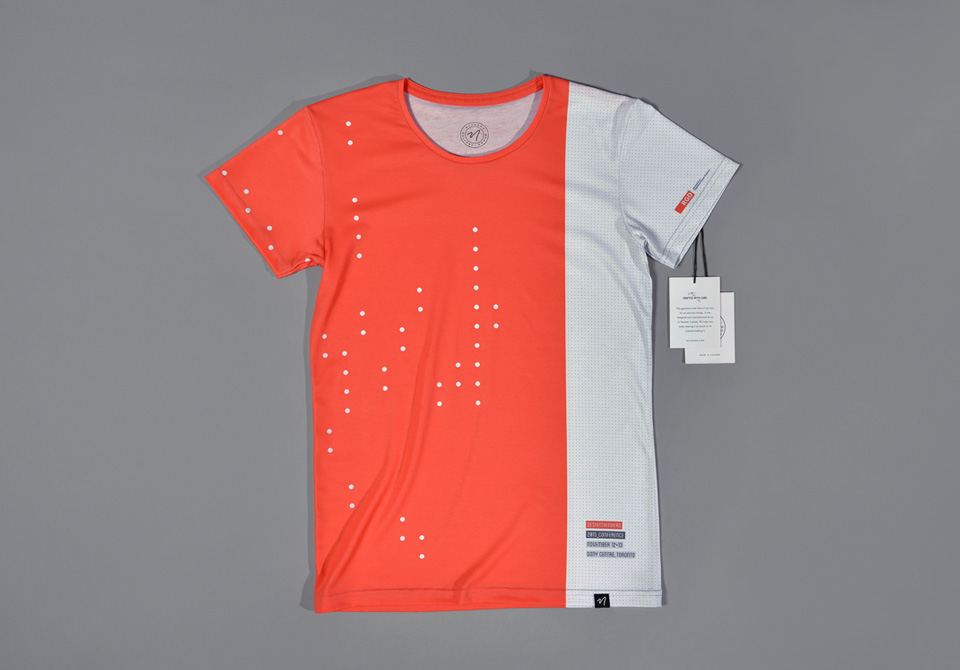 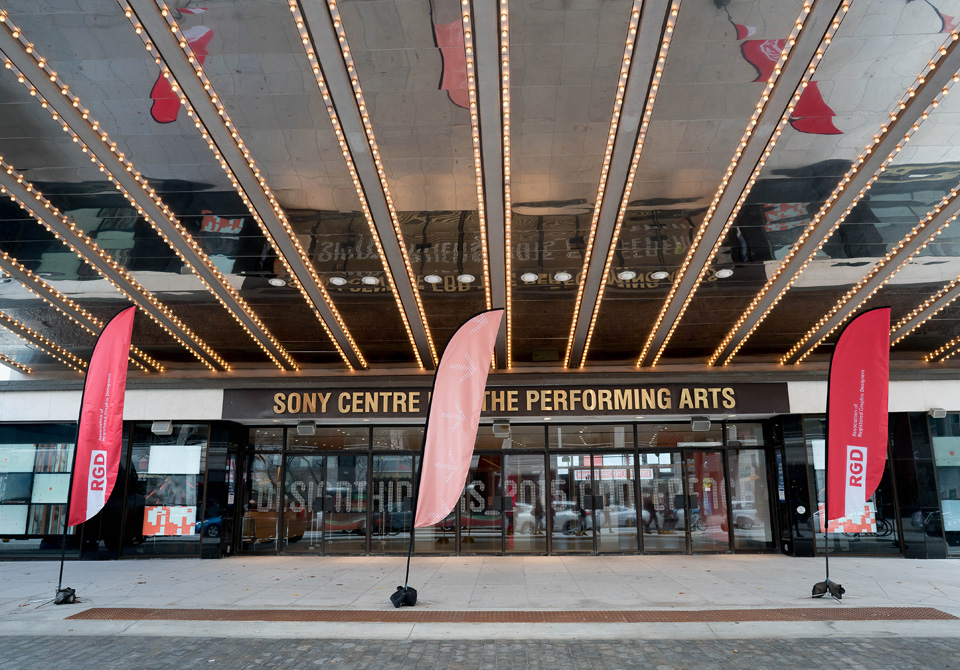 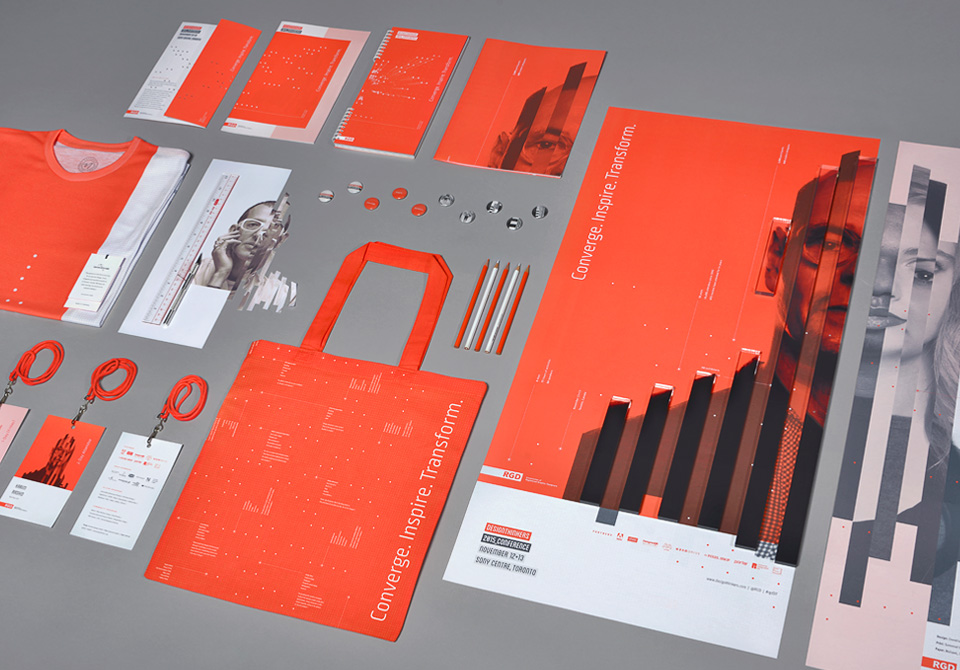 Each year, the Association of Registered Graphic Designers (RGD), a non-profit organization, selects a local design firm to design a complete communications and marketing campaign for the DesignThinkers Conference, Canada’s largest annual conference for the design industry. The project is pro-bono, it develops over a period of 12-16 months, and it involves visual identity, on and off-line collateral mailed out to thousands of people from the industry, video, photography and in 2015… a piece of acrylic sculpture, the main visual of the branding and the centrepiece displayed at the conference.

In 2015, Overdrive Design Limited developed for the conference the campaign “Converge. Inspire. Transform.” The visual theme focuses on the speakers, attendees, points of data and layers of information. The main image, an 8’ acrylic sculpture, represents a SuperSpeaker made out of the idea of different people with different backgrounds, opinions and skills coming together in one location, at one point in time, that would be memorable. To translate the concept on different applications and formats, different materials, papers and print techniques were used throughout the campaign.

THE SUPERSPEAKER
The main image of the conference’s branding, an 8’ acrylic sculpture, represents a SuperSpeaker made out of the idea of different people with different backgrounds, opinions and skills coming together. The front view appears as a recognizable human face and from the side, the profile of a human head and shoulders. By viewing the sculpture at angles other than straight on, the form dissolved into something abstract, resembling bits of data, bar charts or pixels.

The sculpture itself was digitally printed on 44 pieces of 3/8” acrylic. Each piece was then hand drilled, epoxied and fastened to fishing line via miniature hardware. The acrylic strips then had coloured side pieces attached and were suspended from an acrylic laser drilled ceiling plate attached to the top of the framework.

From its conception to finished product, the sculpture took the studio team more than 9 months to complete but with full knowledge that it would be used in many different ways. For instance, the sculpture was photographed (over a 30-hour photoshoot and videoshoot) and used in a variety of print collateral, video and motion graphics. Lastly, it was displayed as a centrepiece at the conference to make a final connection with the marketing materials that people had seen leading up to the conference.

SPEAKER PHOTOGRAPHY
One of the biggest challenges of the branding was the photography of the speakers attending the conference. The images needed to look like they belonged to a family, but they also needed to be strong as stand alones. As well, they needed to relate back to the SuperSpeaker sculpture and to a “sum of its pieces” concept. The biggest roadblock to achieving this was inconsistency in source material with regards to quality, size, colour and composition.

The solution offered no hope of shortcuts: 48 speaker portraits were converted to black and white, manually adjusted in terms of tones, highlights and shadows, then clipped so white backgrounds could be applied, then cropped so that the proportions of heads and shoulders were comparable, then printed and surgically sliced into “tiny little strips with x-acto knives”, hand assembled and glued back together on substrate, then taped to a wall and photographed, then finally brought back on the computer where a final cleanup was applied. 2 months later, the photography was ready to be used in print collateral, newsletters, and on the website, turning out to be one of the most talked about points of the branding.

LOGO
The logo was intended both as visual identifier for the conference and to provide at-a-glance information about the venue based on what, when and where. What: DesignThinkers 2015 Conference, When: November 12+13, Where: Sony Centre, Toronto. The logo could be described as minimal but its form was 100% informed by the SuperSpeaker visual. The logo was also intended to be modular so that, depending on the application, the logo could be used used either in its entirety or in pieces with colour being applied to create additional hierarchy.

POSTER
The poster was the first piece where the image of the sculpture was highlighted. The objective was for the piece to be understood at different distances. The first vantage point is… at a distance. In order to accomplish this, imagery and colour were used in a big way. Details were then drawn out using colour and contrast at closer vantage points. When the front and back of the poster are put together side by side, they form the SuperSpeaker image in its entirety defined by the grid used to build the sculpture.

POSTCARD
At the time when the postcard was designed, the branding was in development, the SuperSpeaker sculpture was being built, and the list of speakers had just began to take shape... there was little information and no imagery. With these restrictions in mind, the postcard was created using different elements inspired by the sculpture and how it was being built. The square shape of the postcard when it’s open mimics the square shape of the top of the sculpture, while the long striped shapes that are formed when the postcard is closed, are a reflection of the long acrylic strips of the SuperSpeaker. The sculpture also involved “hanging points” on a particular grid, from where the 44 acrylic pieces were hung. These “hanging points”, which were holes drilled in the top acrylic, were translated as a diecut on the postcard. Points of information data about the speakers and the conference were then used in a more organic but organized way to deliver the information clearly.

BROCHURE
Objective: design the principal pre-event marketing piece to announce speakers and events at the conference to encourage early signup.

Parameters: finished piece should weigh no more than 60 grams to meet mailing requirements.

60 grams isn’t much and from conception to completion, the variables for the brochure were in continuous flux because planning was in its early stages, as new speakers were being announced or rescheduled and additional events being added. Although not the largest piece of collateral by any means, it proved to be the most difficult one to complete in terms of revisions and sheer hours. Nonetheless, the piece needed to attract attention, so a consorted effort was made to mirror the SuperSpeaker sculpture in the form of vertically aligned type. This was expected to make people somewhat uncomfortable to read it, but at the same time receive attention and make people want to read it and explore it.

PROGRAM
The program was the last and most extensive piece designed for the conference. Chapter openers and photography of the sculpture were used to separate the sections of the book and to organize the content. Speakers were given their own pages and keynotes given spreads, allowing for their photography to be used in a substantial way and for their stories to be given the focus they deserved. To relate back to the SuperSpeaker, the 44 speaker images were individually printed, sliced by hand, reassembled, glued back together, photographed and finally cleaned up on computer.

The format of the program was kept on brand with the previous print collateral: square in shape when open, resembling strips when closed. Wire-O binding was used to allow the book to open flat. Different types of papers and paper finishes were used to help organize content, and to reinforce the aspect of layering and hand crafting.

TAGS
Tags needed to be kept simple, in order for the staff at the conference to be able to easily differentiate the three types of attendees. Colour and imagery were used in a large way to highlight type and names of each attendee.

A website, videos, and 2 teasers were also created to reveal the story behind the conference on different platforms to different audiences.

The conference brought together visionary designers and strategic thinkers from across North America to discuss design and creative processes, from in-house management strategies to working with clients, from type design to poster design, from Buzzfeed to Vanity Fair.

In the end, the “Converge. Inspire. Transform.” campaign turned out to be incredibly successful, inspiring a record-breaking attendance with more than 2,000 participants, and making DesignThinkers 2015 by far the largest gathering of creative professionals the Association has ever hosted.