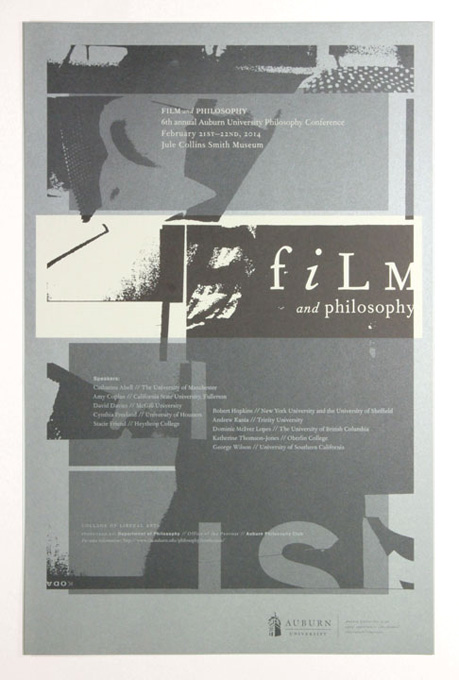 To design a two color poster to promote the 6th Annual Auburn University Philosophy Conference "Film and Philosophy". Specifically, the poster needed to depict not only the physicality of film but also the emotional tie individuals have to fictitious events and characters depicted in film.

Initially, elements were explored that typically depict film including repetition, motion, transparency, the rectilinear shape of a motion picture screen and/or individual frames of film, the "silver screen", and the role of black and white to evoke nostalgia. Then several collages were created by hand using imagery from film and typographic elements that depict sequence. Intentionally vague Imagery was selected for the collage and incorporated with typography to add to the vagueness of the atmosphere and play more to an interpretive idea of film.

Once the collages were created, they were then scanned and and manipulated using high contrast in order to achieve a grainy feel, referencing old films.

Since the conference discusses the emotional ties an individual may have to the fictitious events and characters a film represents, I sought to create a poster that is vague in nature but still had a sense of authenticity to it. The collage is meant not to depict one specific film but rather can be seen as many films in one image.

The use of the repeated horizontal rectangles was meant to depict the individual frames of a film. Whereas the one white rectangle was to represent the frame that is actually projected. The collage was manipulated into a high contrast image to evoke the grainy nature of vintage film with a flood of silver ink representing the phrase "silver screen".

And finally, the title "film" uses four different versions of one font, again to reference the multiplicity of frames within a film. One word made up of several separate elements just like a film is made up of many frames.