We Choose The Moon 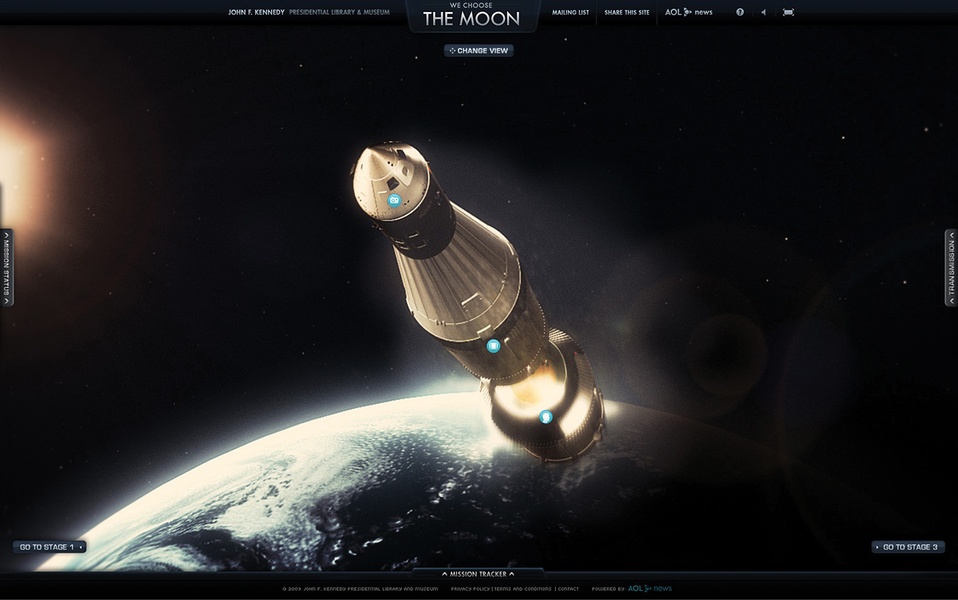 Title
We Choose The Moon

Title
We Choose The Moon

2009 marked the 40th anniversary of the Apollo 11 moon landing. Our brief was to honor that historic achievement as the realization of John F. Kennedy’s dream to land a man on the moon, and bring that mission and his legacy to light for generations both new and old. We decided to return to the moon by re-creating the Apollo 11 mission online in real-time. At precisely 9:32 AM on July 16, 2009, Apollo 11 took off again at wechoosethemoon.org, exactly 40 years after the historic mission. Eleven of the most important stages were portrayed using 3D animation, and accompany- ing the visuals were 102 uninterrupted hours of mission audio. Over 450 photos and videos from the NASA Archive and John F. Kennedy Presidential Library could be viewed throughout the trip. And 650 of the most interesting audio transmissions were rebroadcast via Twitter, exactly 40 years after they were said.
As anticipation built around the anniversary, we launched a landing page where visitors could learn about the mission, watch President Kennedy’s address that challenged a nation to land a man on the moon and share the site via social networks. We then began rebroadcasting the details of the mission and astronaut dialogue over Twitter. These would continue until the astronauts returned to Earth. Tweets and re-tweets from the 30,000 Twitter followers reached 1 mil- lion additional people. After four days, the astronauts landed on the moon. After July 20, the live experience converted to a self-guided tour where visitors could interact with the mission, audio, photos and videos at their own pace.
During the four-day journey, over 1.25 million unique visitors traveled to the moon, and 30,000 followed the mission on Twitter. Media coverage generated over 160 million impressions worldwide, including live coverage on CNN and countless stories in newspapers, websites and blogs. Eight months after launch, the site has received 3.8 million visits from 217 countries. Attendance at the JFK Library increased by 10% over previous years in 2009, keeping the JFK Library as one of the most popular of the presidential libraries.