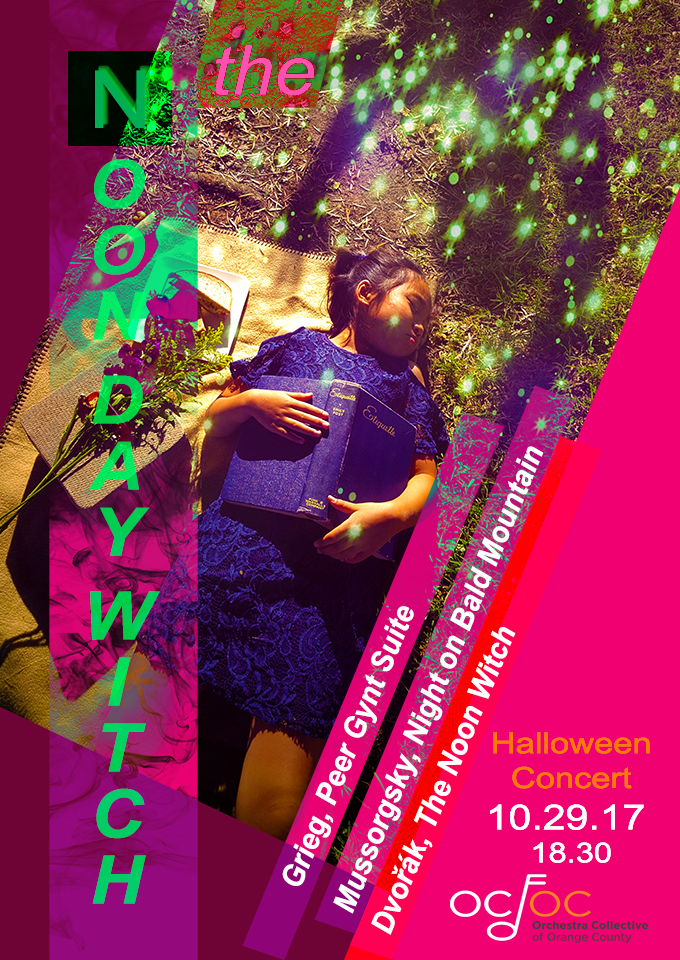 Client
OC of OC --The Orchestra Collective of Orange County

Client
OC of OC --The Orchestra Collective of Orange County

My assignment was to create a dynamic stand-alone poster that would provide viewers with a more contemporary angle in reinterpreting classical music for the modern day. OC of OC is a fledgling, energetic, newly formed full symphonic orchestra and I wanted to convey this in the design.

Dvořák's 'The Noon Witch' was the highlighted piece for the orchestra's Halloween performance which included live narration of the story of 'The Noon Witch'. It is a story that is based upon the fairy tale poem by Czech author and poet Karel Jaromír Erben entitled 'Polednice'. It is a macabre story in nature that tells of a misbehaving young child that is told by his mother of 'Lady Midday' a diminutive grotesque creature that arrives at the stroke of noon to take away unruly children from their home. Given the knowledge that 'The Noon Witch' would be narrated during the performance, I thought it appropriate to put the focus around this piece with the design of this poster. I had the vision of creating a hyper-realistic scene that would trigger not only a sense of wonder but also a controlled sense of tension and unease in the possibility of a more savage ending. While the 'The Noon Day Witch' is a mid 18th century fairytale, the poster was stylized to evoke imagery that has current portentous notes, insinuating the innate fear in us all with the notion of abduction.

The result is a poster design that speaks to the modern day world helping to open the dialogue for the relevance and importance of the understanding of classical music today.