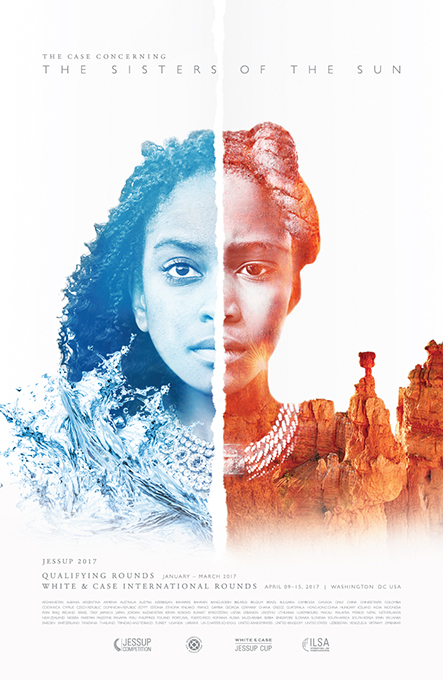 Create excitement, bring the fictional case to life and encourage law students around the globe to enter the most prestigous moot court competition in the world.

Nothing combines drama and entertainment like Hollywood. The blockbuster style of this ad brings the drama of the case to life.

The story is brought to life by the division of two faces symbolizing a conflict between sistering countries. Using a torn split between the two faces highlights the hostility and exemplifies the broken unity between the counties. The quiet and subtle grey fonts allow for the faces of these women to be the ultimate focal point. Using a combination of serif and san-serif fonts, as well as the use of complementary cold and warm colors, play into the dramatic effect created by the tone of seriousness in the womens’ faces. On one side, the landscape of sandstone canyons symbolizing the worsening conditions of drought awakened through a double exposure effect. In contrast, the opposing country is represented by tumultuous waves of crashing water, bringing to light the story element of the lawful right to access water.

Over 500 teams across a hundred different countries participated in this years Jessup competition.