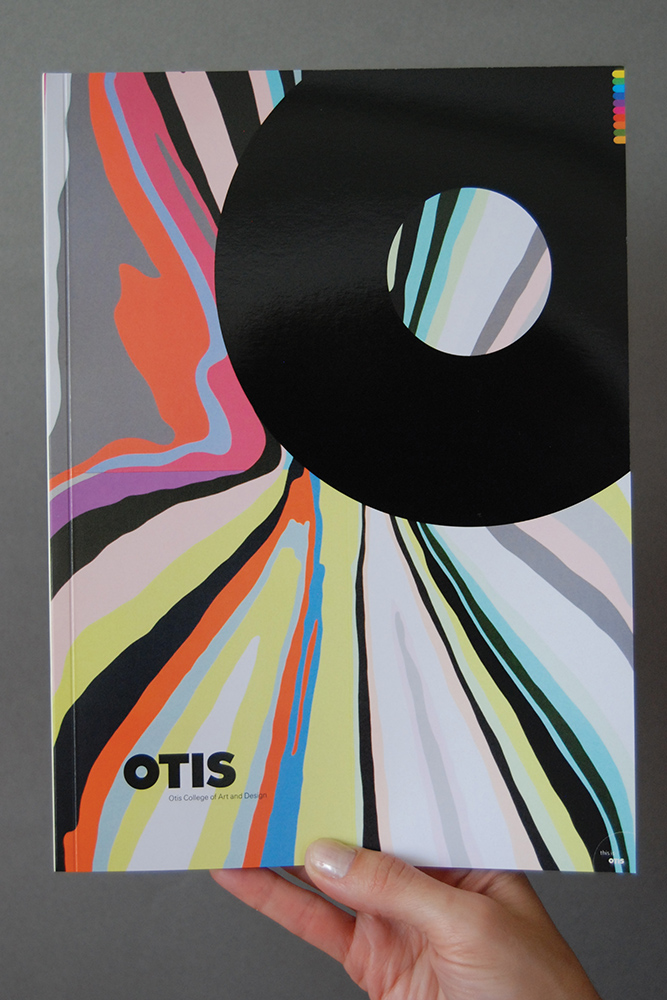 The 2008-2009 Otis Viewbook is the undergraduate admissions catalog for Otis College of Art and Design, a small, independent art school with a long history in Los Angeles, California. The goal of this 116-page, 4-color recruitment catalog is to invite potential students to visit the campus by presenting the school as a friendly, supportive, diverse environment where students receive professional, world-class training in art and design. Two designers with independent studios came together to collaborate on this project. After extensive research and conceptual development, we decided to put the students and their work in the forefront by minimizing our “hand” as designers, all the while retaining a considered, lively presence. Our main goal was to make an immersive Viewbook—a sort of virtual tour of Otis—as well as to provide a forum in which students speak to their future peers while still clearly presenting the administration’s vision. Structurally, the Viewbook organizes information with two distinct coding systems. The first system utilizes brightly colored lozenges at the top edge of the page to indicate the program in which the work on that page was made. (The colors identifying each program are predetermined by the school’s identity.) In the second coding system, quarter-circles on the lower left corners progress from white through grey to black, and indicate nine sections or chapters. Each section has its own visual language: from the image-saturated and student quote-rich “who we are,” to the type-only “what we study”, from the mash-up of photos of student life, quotes, and work in “OTISLAND,” to the image only gallery of student work in “what we make II”. Three-quarters through the project our print budget was slashed, cutting pages and taking away most of the bells-and-whistles we had planned (multiple paper stocks, scratch-off ink, glow-in-the-dark ink). This challenged us to tighten design moves. With one paper stock and 4-color process throughout, we focused the section shifts on typography and grids. We were able to incorporate one “value added” bonus, a 3-color split fountain poster with admissions info on one side and a “sketch O” (an interpretation of the Otis “O” logo made up of a variety of student sketches) on the other. This comes in two colorways, adding to the collectability of the poster. We were also able to print an additional 500 single-sided posters of the “sketch O” for the development office’s use. This is the first Otis Viewbook to thoroughly feature student work and the collective nature of student life at Otis. We went far beyond the original project brief which asked the designer to give form to provided texts and images. Rather, we chose to act as content providers and solicit, generate, and curate a large body of student work and documentary imagery. We closely observed the life of the school in order to accurately and sensitively present the richness and exuberance of student work and life at Otis, an exuberance that begins on the spine, with a declaration by a student. We were closely involved in photography, attending and directing most photo shoots and taking pictures ourselves. We knew that an “above-and-beyond-our-standards” end result would depend on:—Our full involvement in all aspects of the project, including content development, rather than only utilizing materials provided by the client.—During the research phase of the project, we performed an extensive survey of major US art-school catalogs which left us underwhelmed. These catalogs ranged from the corporate to the intellectual, but few stood out as tactile, emotional pieces that invite the 17 to 20-year-old target audience to explore the school from afar. Our catalog does this!—Vibrant, tactile storytelling that inspires potential students to visit Otis became our grail after this survey. Every page is a small world, every spread matters. Each section reveals the richness of studying art at Otis through the eyes and the work of students.—This copy is Year Two, with a bright, compelling new cover which spotlights a student painting. Several spreads have been updated with new photography.—This year, for the first time ever, Otis has a waiting list. We believe this is an indication of the success of Year One in speaking to our target audience.