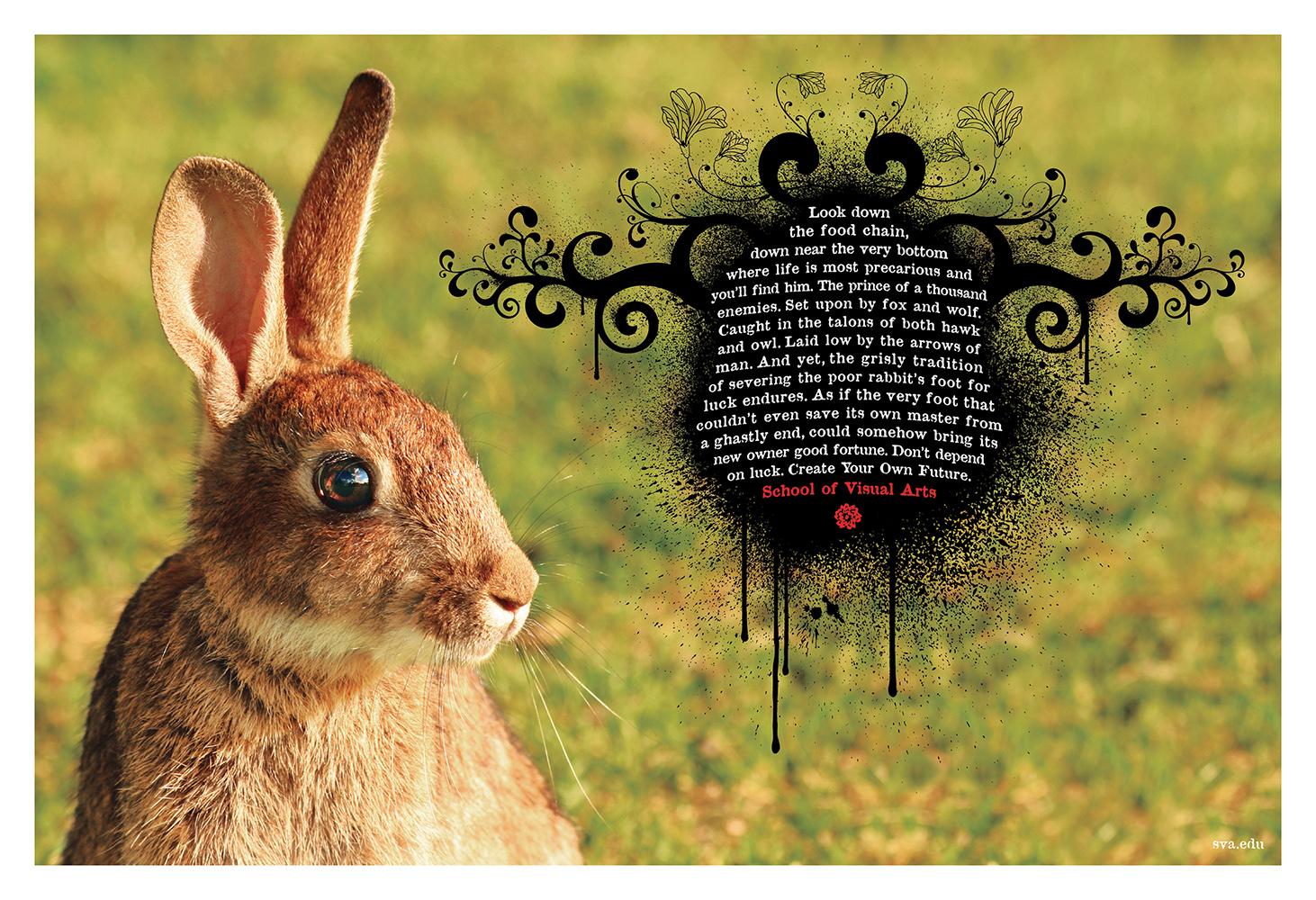 BACKGROUND
The School of Visual Arts has many creative departments rated amongst the top in the world. The goal was to commu- nicate that choosing any other school is a compromise and you’d be taking a gamble — hence the line: “Don’t Depend On Luck.” The ironic, yet truthful details surrounding the animals featured served as metaphors to communicate the strategy. The posters stood out amongst the many cliché recruitment posters normally seen done for schools.
TURKEY
Behold this unfortunate flightless bird, rendered asexual and bred by artificial insemination. Reduced to an industrial commodity and packed into plants by the thousands with breasts so swollen from genetic manipulation that their legs collapse beneath them. Yet, millions of people take joy in finding the poor turkey’s wishbone, believing it will some- how bring luck. But what exactly about this misbegotten bird is so lucky? If it was lucky, it would have been an eagle. Don’t depend on luck. Create Your Own Future. School of Visual Arts.
HORSE
Equine nobility. Born to run free, but tamed by man and shod in iron. Led to field by peasants and broken by the plow. Or raced on the tracks of kings only to shatter upon the hard dirt. And finally, to slaughter and the most ignoble of ends, as food for lesser beasts. Yet, in spite of this misery, the horseshoe, the very symbol of a horse’s servitude is still seen as a vessel of good fortune. But the horse knows different. It knows that the horseshoe leads to many things, but good luck is never one of them. Don’t depend on luck. Create Your Own Future. School of Visual Arts.
RABBIT
Look down the food chain, down near the very bottom where life is most precarious and you’ll find him. The prince of a thousand enemies. Set upon by fox and wolf. Caught in the talons of both hawk and owl. Laid low by the arrows of man. And yet, the grisly tradition of severing the poor rabbit’s foot for luck endures. As if the very foot that couldn’t even save its own master from a ghastly end, could somehow bring its new owner good fortune. Don’t depend on luck. Create Your Own Future. School of Visual Arts.