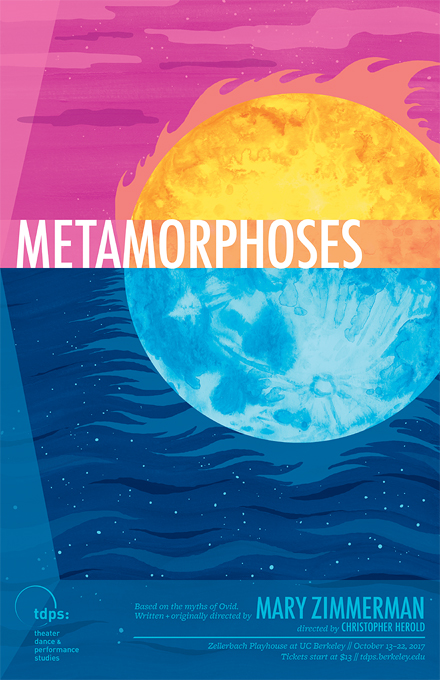 The brief was to create artwork for both print and digital media to advertise “Metamorphoses,” a play adapted by Mary Zimmerman from the classic Ovid poem of the same name. The imagery had to include water, since a prominent set element is an actual pool, ranging in depth from three to 18 inches.

The play's non-linear progression (it is a series of vignettes) and large number of characters involved in diverse stories made crafting an overarching identity for the play an exciting challenge. That challenge was eased somewhat by director Christopher Herold, who expressed a preference for nature and landscape imagery, and did not wish to include human forms in the artwork. I was approached by the client with the idea of a sunset over water as a starting point.

Since the play's theme is that of transformation, I began seeking ways to turn a sunset over water into a landscape illustration with a twist. The natural division created in the artwork by a horizon line seemed an excellent prompt for visual duality: rather than render a true reflection in the water, I would instead transform the warm sunset into a cool moon in a starry blue sky. Even the flames of the sun morph, becoming light blue waves.

The artwork was rendered in a mix of analog and digital media. The backgrounds were painted in acrylic and overlaid with vector clouds, waves, flames and stars. The moon and sun were painted in watercolor.

Happily, the imagery I created for the show was received with enthusiasm by the play's director. The art appeared in both printed and digital formats — posters, flyers, programs, and social media-ready images — that were dispersed on the university's campus, Facebook, and beyond. The resulting suite of collateral provided a consistent, recognizable, and professional identity for the production.