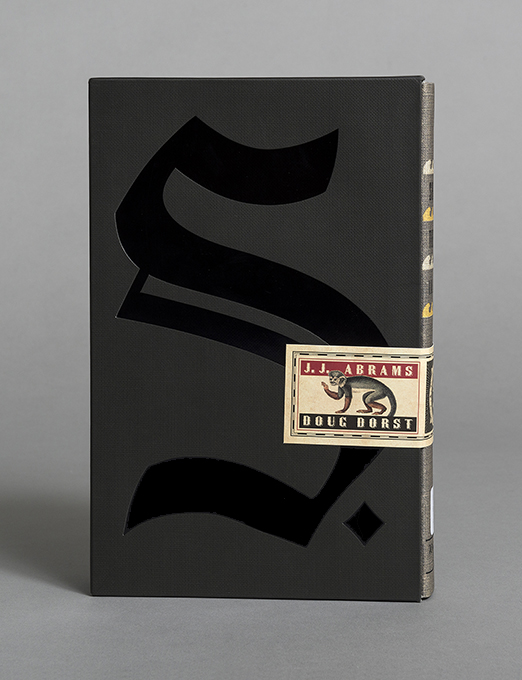 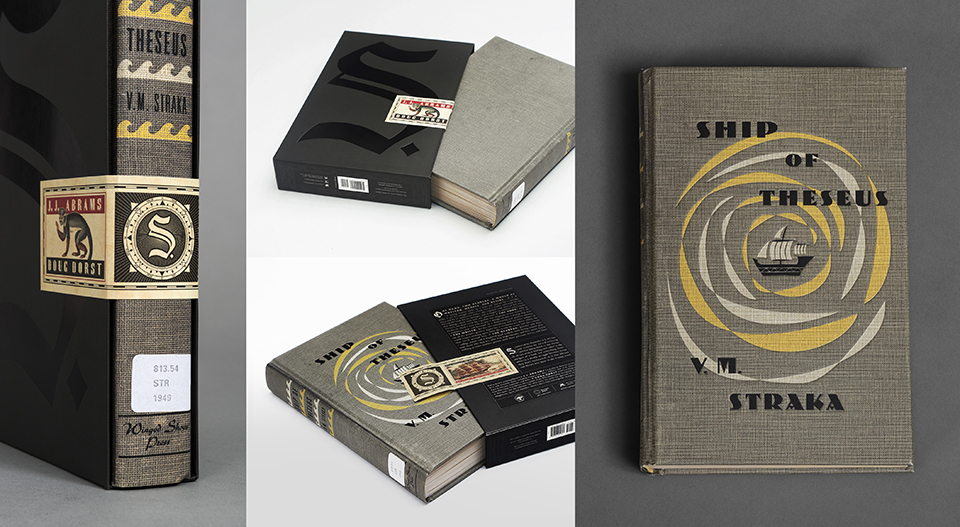 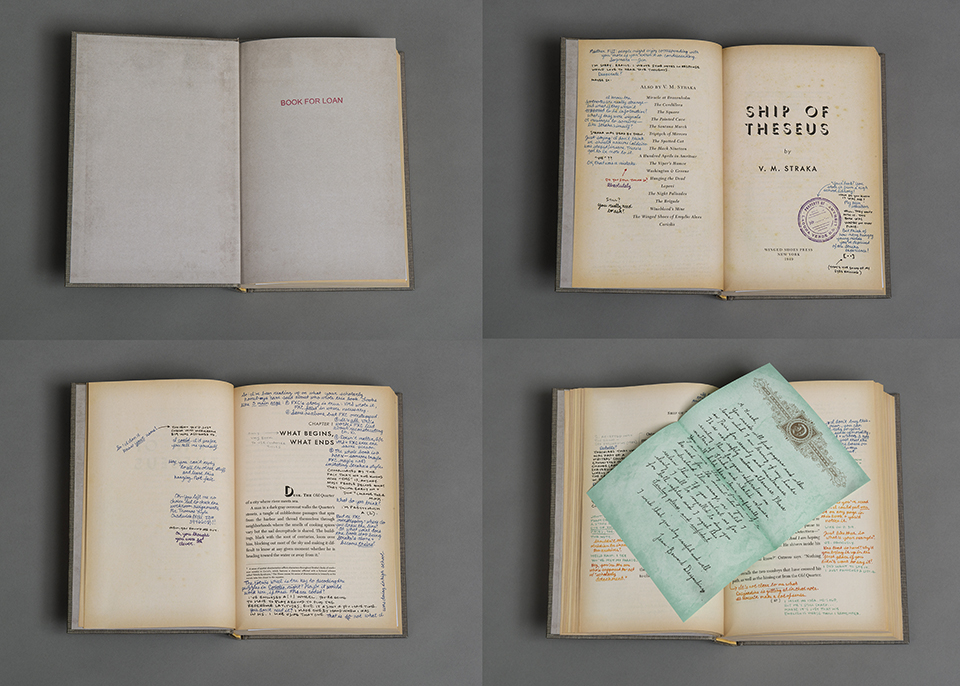 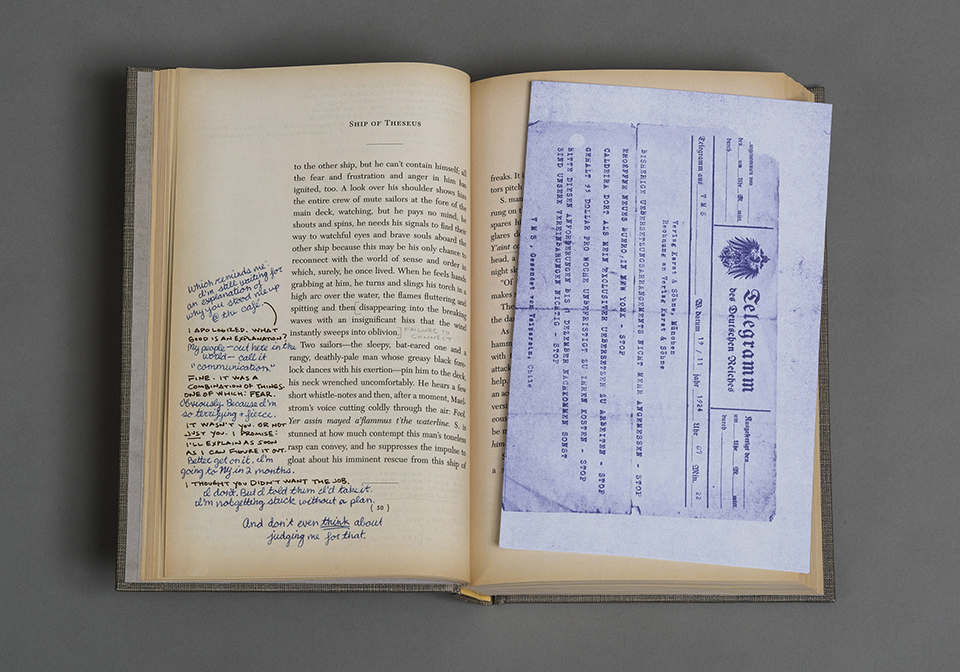 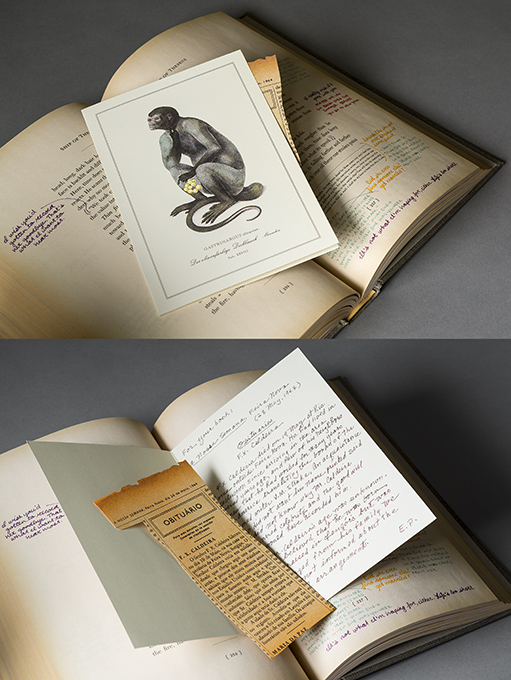 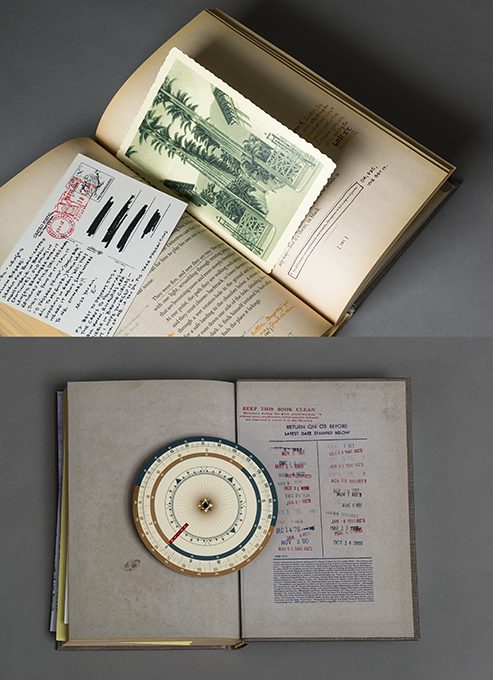 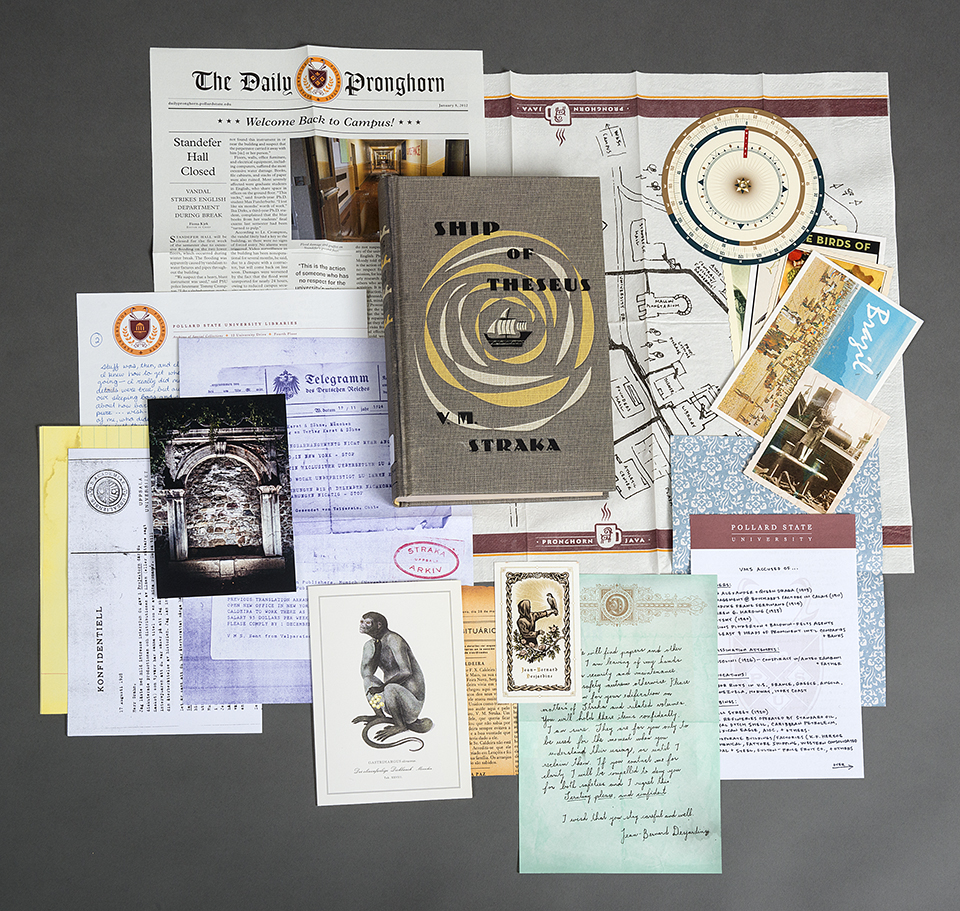 "S." is the first novel conceived by film maker J. J. Abrams and written by Doug Dorst, envisioned as a literary mystery box:

One book. Two readers. A world of mystery, menace, and desire.

A young woman picks up a book left behind by a stranger. Inside it are his margin notes, which reveal a reader entranced by the story and by its mysterious author. She responds with notes of her own, leaving the book for the stranger, and so begins an unlikely conversation that plunges them both into the unknown.

The book: "Ship of Theseus," published in 1949, the final novel by a prolific but enigmatic writer named V.M. Straka, in which a man with no past is shanghaied onto a strange ship with a monstrous crew and launched onto a disorienting and perilous journey.

To immediately intrigue the reader and imply it's mysterious and interactive nature, the book comes sealed with a sticker in a black on black foil stamped slipcase. After breaking the seal, the book that is revealed is "Ship Of Theseus," the stolen library book. Upon opening, you discover that the book has been heavily annotated — the handwriting in the margins tells the story of the two college students. The stolen book is used as a communication device between the students as they pass it back and forth. Tucked inside the pages of the book are 20 plus pieces of removable ephemera (custom designed for this book) which provide clues and sub-stories, including a map drawn on an actual napkin, postcards, photos, letters, a funeral card, a college newspaper, mimeographed telegrams, Xeroxed documents, and even a decoder wheel. J. J. Abrams was adamant about keeping the experience as realistic as possible for the reader so they become immersed in the Meta world of the novel. Each piece of ephemera was printed on the most realistic paper stock possible (newsprint for the campus newspaper, bible paper, and an actual paper napkin). Every detail needed to be addressed — fake isbn number and company logo on the back of the greeting card, realistic Brazilian postage for the postcards, creating an identity system for the imaginary Pollard State University. An actual sticker was used for the library sticker on the spine. A custom "S" was created as a symbol for the secret society depicted in the story (used prominently on the slipcase). Time-specific fonts were researched and chosen to set the books text (New Caledonia), and all the writing in the margins is actual handwriting to keep it authentic.

The book was well received with both critics and audiences, becoming a "New York Times" bestseller and finding an audience willing to embrace and participate in it's challenges. There are different ways to approach reading the book, and it is up to the reader how they wish to tackle it. There have been numerous websites and blogs by fans dedicated to decoding the mysteries of the novel. Many people comment that the book can be enjoyed as an intriguing object even if you don't spend the time reading and deciphering the book. It was very rewarding to work on a book that celebrates the medium of print—a book whose experience can't be duplicated in a digital realm.