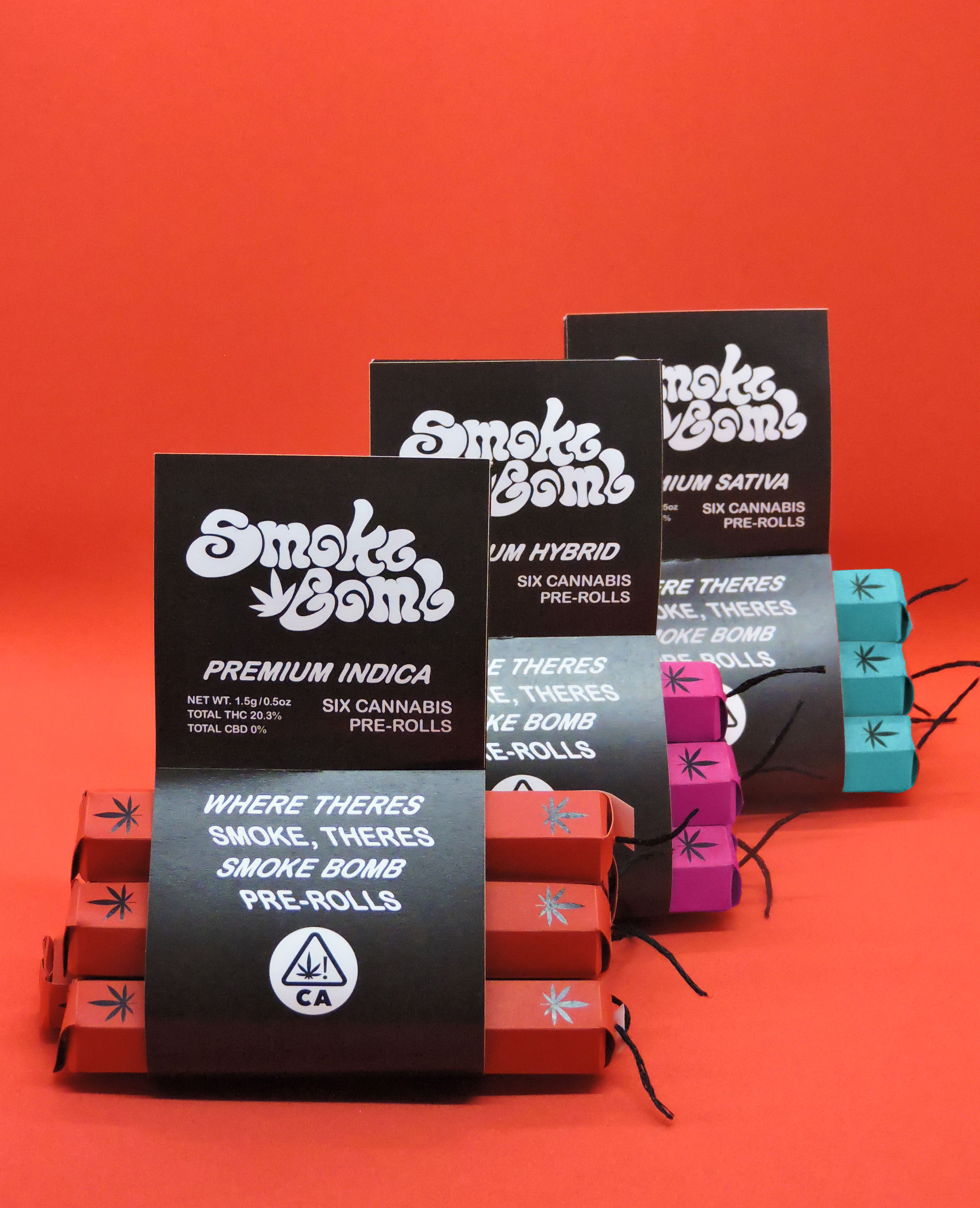 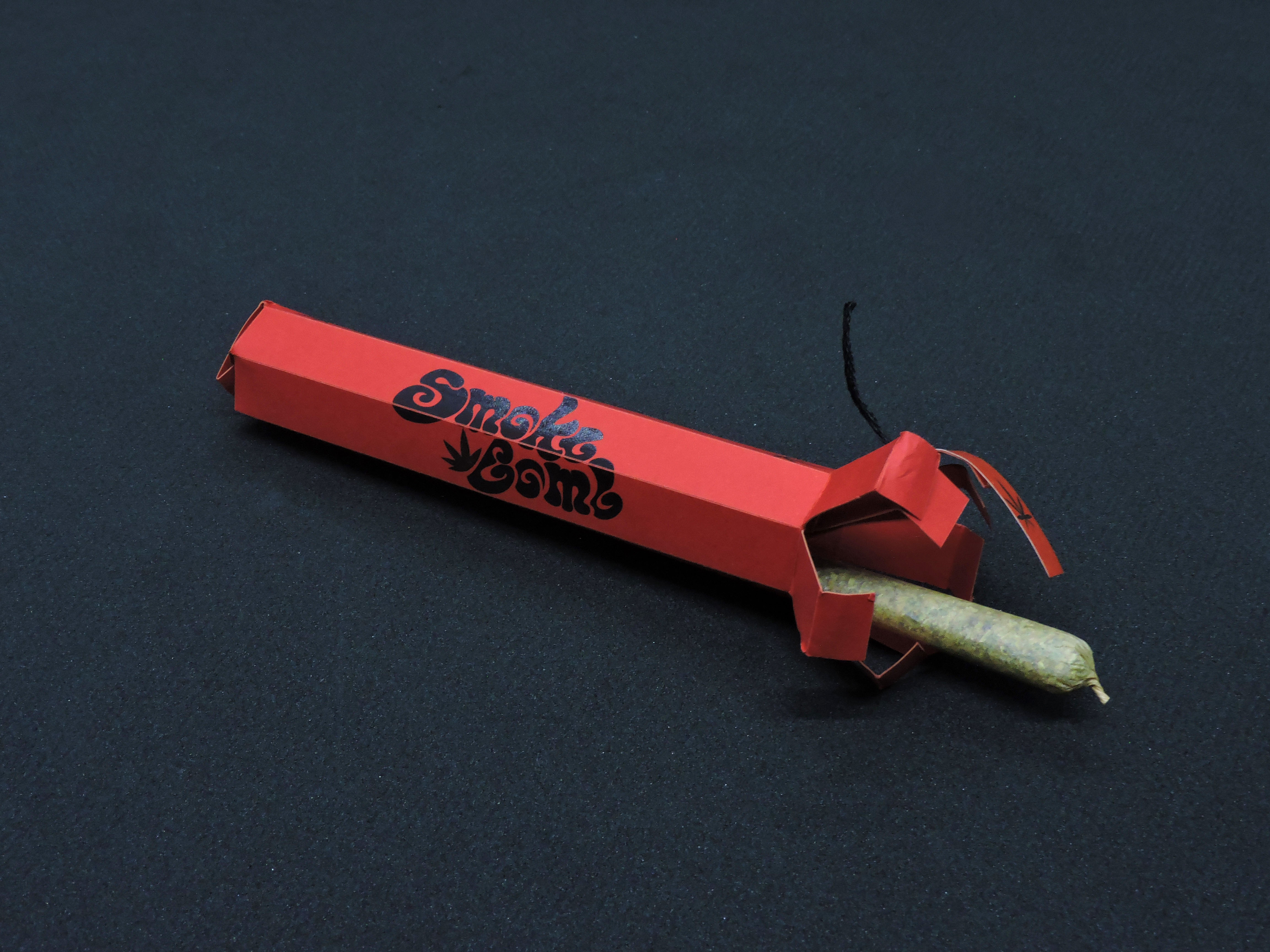 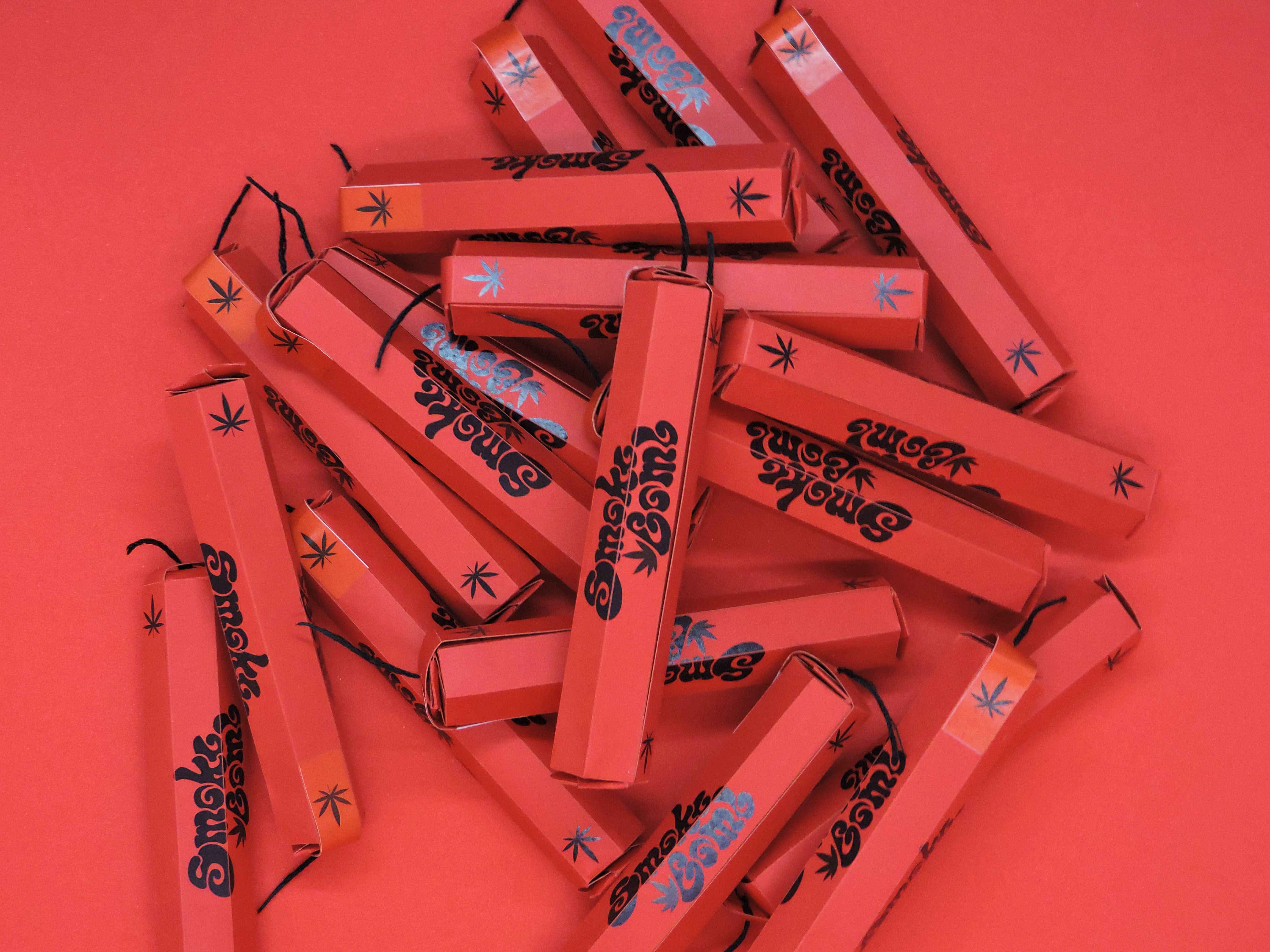 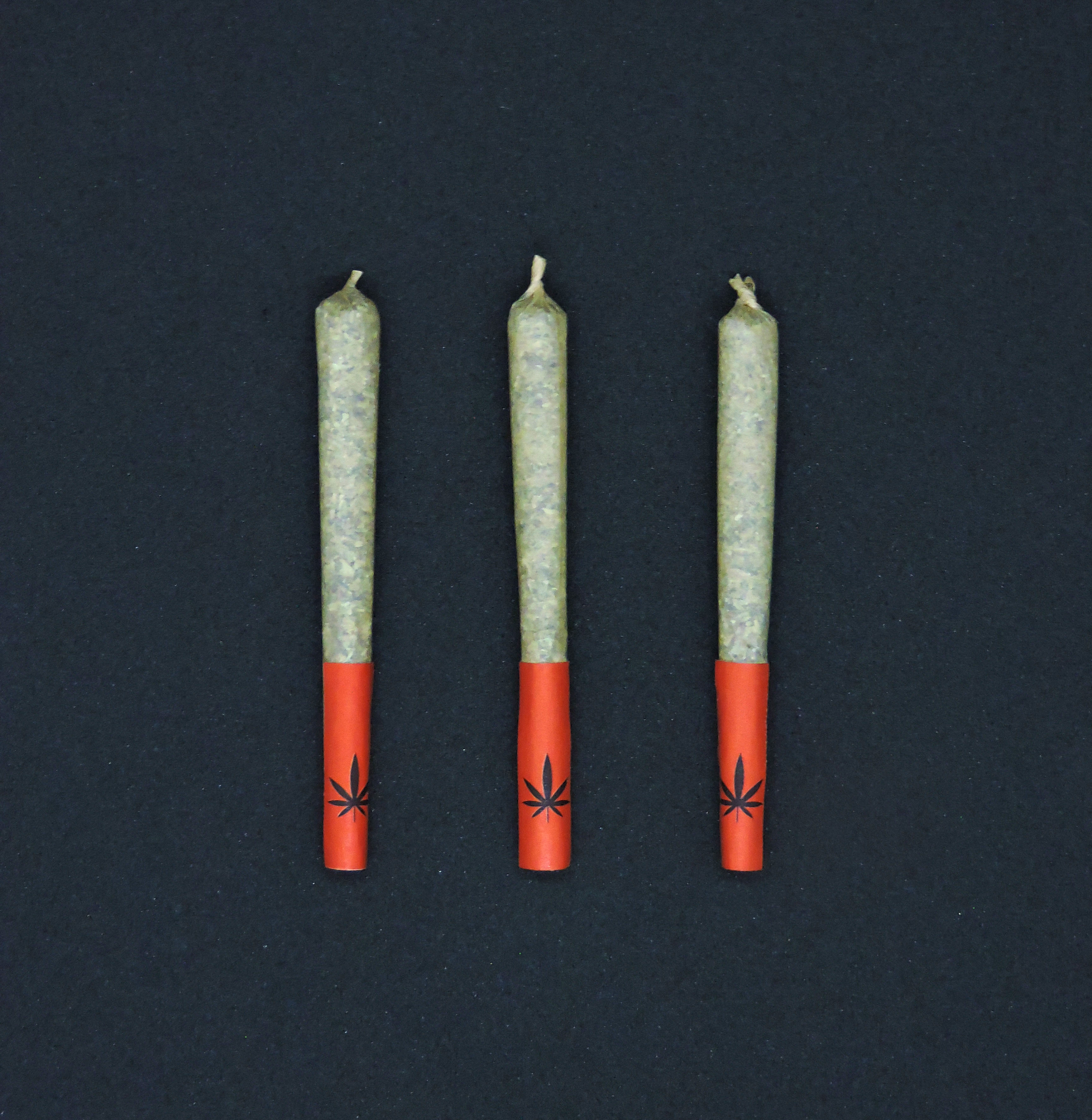 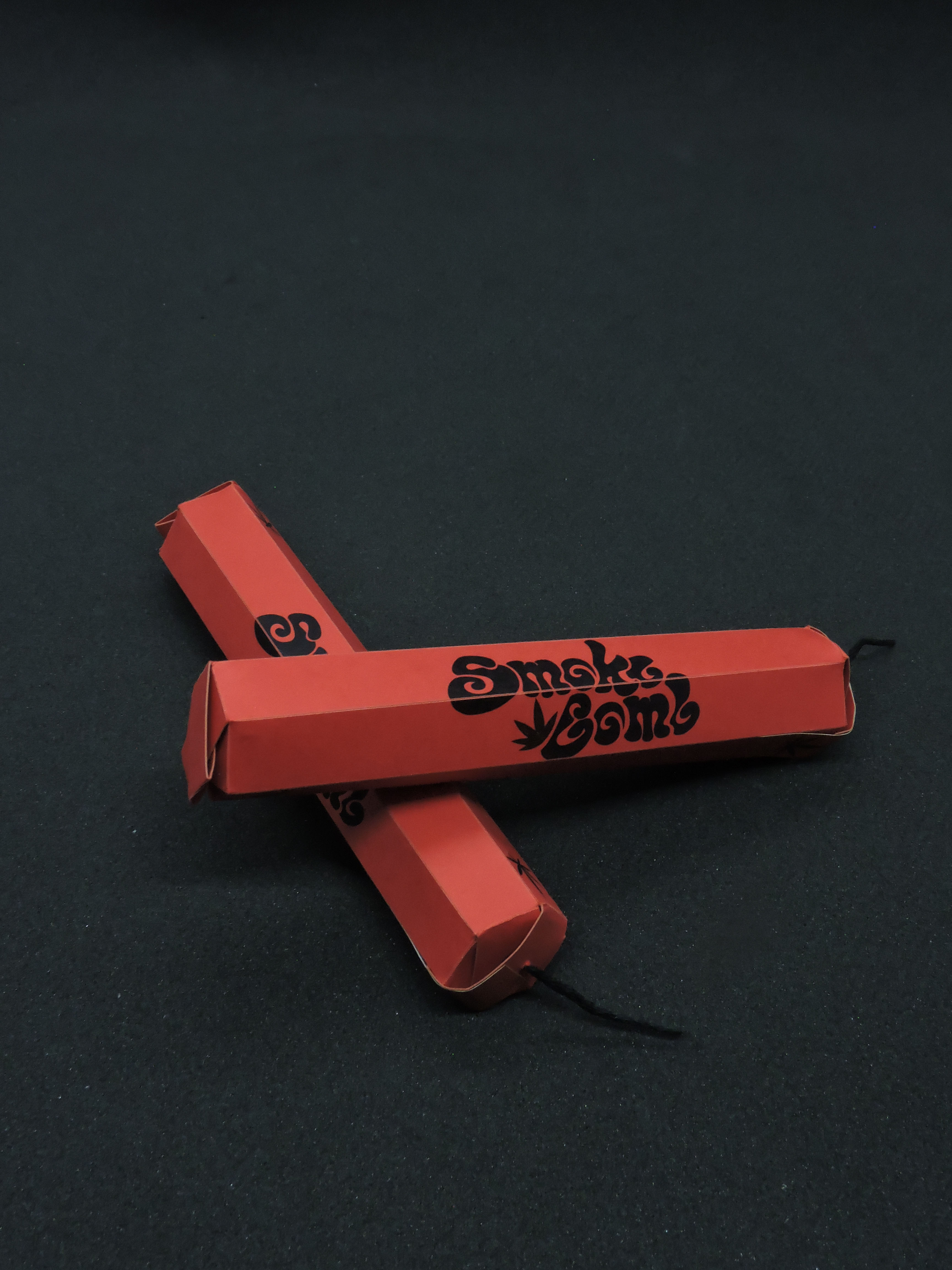 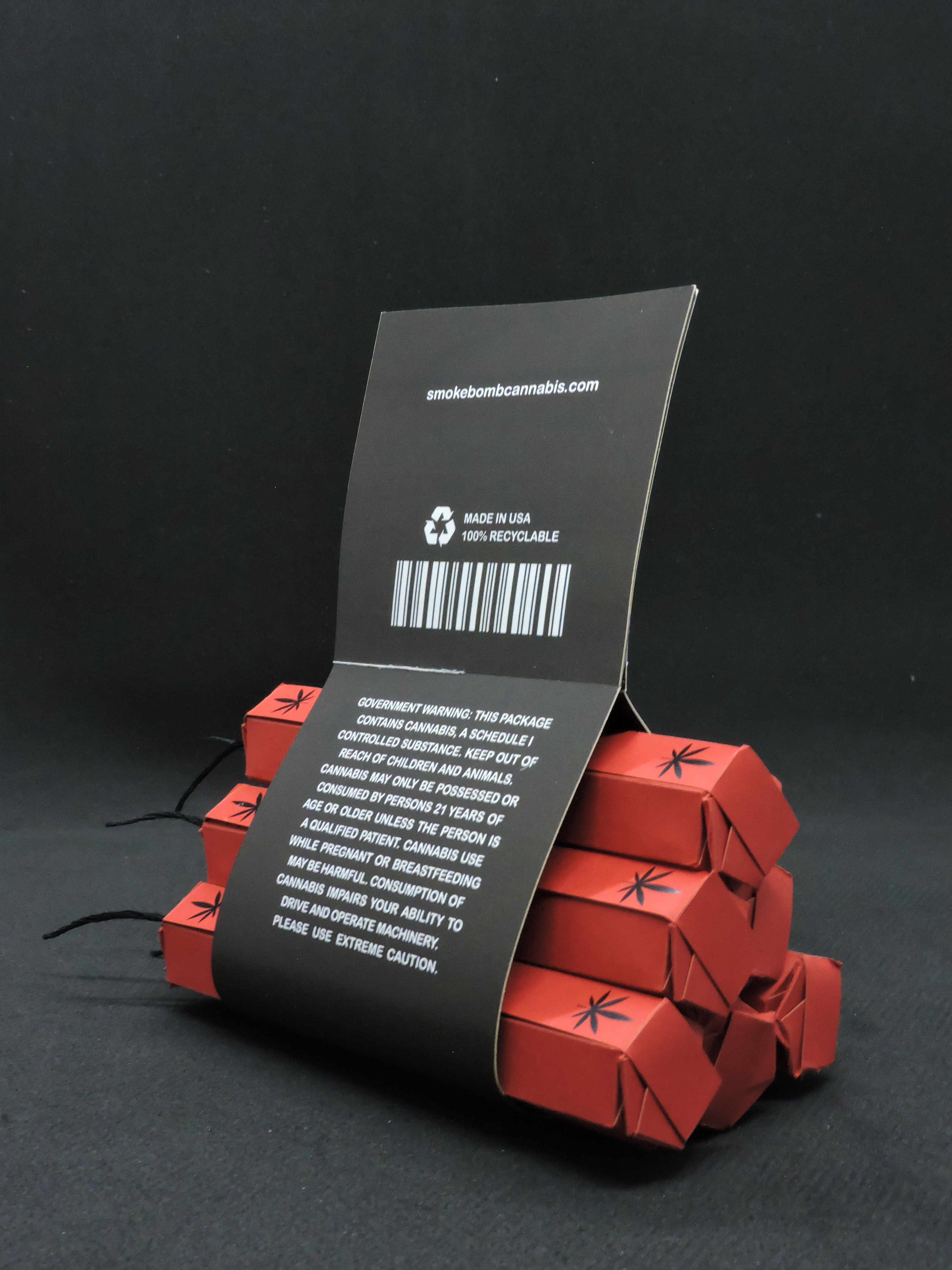 The branding for the Smoke Bomb Pre-rolls was inspired by a play on words. The duality for ‘smoke’ in smoke bombs works for the recreational use of smoking marijuana pre-rolls. To continue the theme of the bombs, I designed the packets which hold the pre-rolls to mimic the look of dynamite sticks. This is done through the main use of the colour red and the string on the lid. I intend this packaging for adult use, with the labeling laws of California for cannabis products.
The typography is meant to mimic the motion of smoke and the shape of smoke plumes. The main display type (the brand name ‘Smoke Bomb’), is rounded with thick strokes to mimic the shape of smoke plumes. The slogan (which is above the California universal symbol for cannabis), replicates the motion of rising smoke by slanting the words and alternating each line.
The required government warning is incorporated with spaced leading. This gives the warning text the ability to breathe.
The text underneath the display type is balanced by keeping the net worth, THC and CBD amount flushed left, and the product indication flushed right. To add to the balance, the kind of marijuana is placed above these elements to maintain balance.

The decision of implementing California labeling laws over Canadian labeling laws for cannabis was made based on the liberties and leeway available for ornamental design. California by far was a better choice because the Canadian laws purposely eliminate the use of certain colors (fluorescents) and design elements in order to become less appealing to children. In addition, I felt the yellow warning label restricts the design by clashing with other colors.
Another factor which influenced the decision of California labeling over Canadian labeling was the universal symbol. I wanted to use the California universal symbol for cannabis because of the black and white contrast which worked well with my black and white label, which makes the symbol look cohesive with the design.

The folding method used to make the packets was the most important because they protect the product and keep children from opening the product. The strongest shape is the hexagon, which is why the packet is a hexagonal prism as opposed to a conventional cylinder, which is weaker. The packet also has space between the pre-roll and the container in order to give cushioning space, so the product is protected.
The folds at the end of the packet fold into each other which make the flaps fold over each other thus, making the fold too complicated to open for children but simple enough for an adult to open.
The final flap at the end of the pre-roll packet is stuck down with an anti-tamper sticker, which seamlessly matches the marijuana leaf on the packet design. This is a requirement for single use cannabis products in California.
The string at the end of the packet not only serves an ornamental purpose as it mimics the look of a dynamite stick, but it also assists the user in opening the packet by giving them a place to pull the first flap open.
The sleeve of the product holds the packets together without the use of adhesives. The sleeve also serves the purpose of displaying the labeling requirements, which wouldn’t fit in the packets due to their small size.
The three different colors used with this product are intended to differentiate the types of cannabis in the pre-rolls (indica, hybrid and sativa).
This product is useful for people with visual impairment. The string indicates where the top of the packet is, and it provides the users with a method of opening the product by pulling the string.