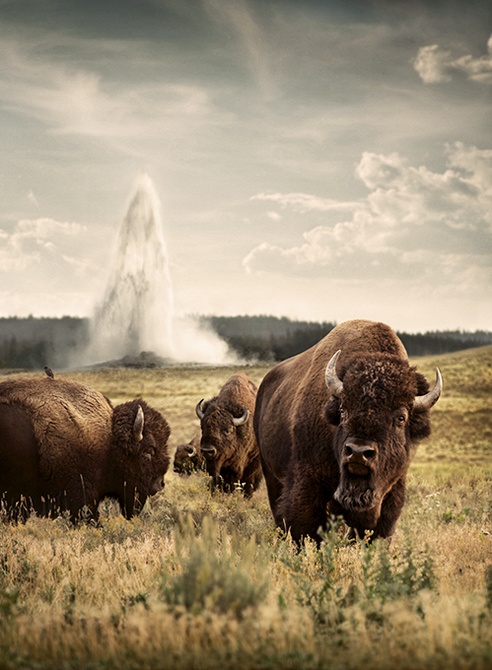 When the guys at Barnhart called me, to shoot wild bisons with geysers in the background in Yellowstone National Park, I figured it was going to be just another shoot. I was wrong. Bisons are the most dangerous animals in the park. From 1980 to 1999 more than three times as many people in Yellowstone National Park were injured by bison than by bears. On a previous assignment in the park, I was charged by a bull. Fortunately I was close enough to my car to run in, step on the gas and peel out. I knew this shoot had to be approached differently, it couldn’t have been scheduled with the client there or an art director. It was too much of a liability. It had to be handled like a “hunt” and after explaining the logistics to Barnhart they agreed to let me “Roam Free” with my assistant and do it on my own, with a flexible schedule. I immediately called the Park to find out the whereabouts of bisons. They replied “Bisons are in the rut (mating) and are roaming in the Lamar Valley in big herds”. ”Hummm… ” That’s the opposite side of the Park where all the geysers are and big animals in the rut and excited is not what I wanted. Not a problem. Nothing photoshop and a getaway driver with a fast car will not fix (at least that’s what I thought). I then researched about geysers. Some are so unpredictable, that I could have spent the rest of my life waiting for them to erupt. Old Faithful was going to be my only option and who cares if it’s surrounded by benches and herds of wild tourists…The first part of the shoot was going to be getting the image of the geyser and treeline. We camped by Old Faithful and sat my watch to every eruption. Waiting patiently for it to erupt “Here it comes! pufh…”. A little smoke, some steam, a couple of puffs, “Oh, is that it? I think this was a lame one…”. I waited an hour for the next eruption. Next eruption exploded to a million feet and I scrambled running back to get the whole thing with my lens that was too long. It was massive and I was really working hard to get the whole thing in my frame when someone from the back asked. “Sir? Do you mind if I rest my camera on your back while I take a picture?”. That is a pretty acceptable request when shooting around old Faithful. ”Sure” I replied and kept shooting with my new friend. I spent a day and a half fighting tourists and getting pictures of Old Faithful in every light situation I could get, to match the lighting of what the bison foreground might be. Old Faithful was faithful but it sure had it’s own temperament.

Next part was going to be shooting bisons. I didn’t want to use a telephoto lens and sit back from the distance and shoot. I really wanted the viewers to feel they were right there in the middle of the herd. I grabbed mid range lenses for a more intimate perspective. The plan was to drive to Lamar Valley, find buffalos right next to the road, have my getaway assistant driver drop me off by the buffalo, jump out and start shooting and race away with the fast car before the bisons got me. As soon as we arrived in the Lamar valley, I realized that the getaway driver plan was not going to work.
Shooting from the road was not going to give me the right angle and none of the bisons by the road where in the right position or matched the lighting I was looking for. I am not good at giving up and I sure was not about to call Barnhart to say I couldn’t do it. In my career, I have found myself shooting potentially dangerous assignments. I tromped around in alligator infested marshes, swam with giant squid, dove with sharks, got kicked by a mama kangaroo who looked at me with loving eyes and seemed friendly. Before these kind of shoots I google and look at statistics to evaluate the risk I am about to take. I googled Bisons accidents, and the incidents caused mostly broken bones and puncture wounds with just one casualty in 1983. The broken bones I can deal with, is the casualty that I really try to avoid. According to statistics the shoot seemed doable. I waited for the right light, left my getaway driver on the road and ventured a mile into the heart of a big meadow dotted by a herd of buffalos. I followed draws and hid behind sage brush bushes and slowly worked my way to the herd. For the next 3 hours I followed them and was right in the middle of them breathing quietly. Had bisons within a few feet, I laid flat on the ground or hid behind bushes knowing that there was no escape if one bison didn’t like me. The bulls were on fire. Fighting, running other bulls off and screaming at each other. I stayed invisible and kept shooting. I slipped out at the end of the day in darkness and was there right before sunrise the next morning. I followed this herd for a day and a half hoping that none of the bulls would turn on me. I didn’t want to make the news “Careless and unprepared photographer gored by a Bison”. I was very aware of the risk, I knew there was the possibility of broken bones but I sure didn’t want to come across as careless or unprepared. The bisons spared me and turned out to be a memorable experience. I don’t know if it was the mental tension or the physical demand of crawling for hours at a time but when I walked away from the herd I had nothing left in me. I was spent, but holding at hand flash cards full of Bison pictures I was very excited about.

I was happy that I was able to caputre the image the client had envisioned and come back in one piece. Client was very happy with results.